After its last earnings report Wells Fargo’s (NYSE:WFC) shares were sent lower, and shares are currently trading well below the highs seen earlier this year. Let’s see whether that sell-off makes Wells Fargo attractive for investors.

Shares are trading for a little above $52, which is 13% below the 52 week high, but still way higher than the lows seen last fall when the company’s scandal got public.

Let’s first look at a couple of key elements of the company’s last quarter earnings release: 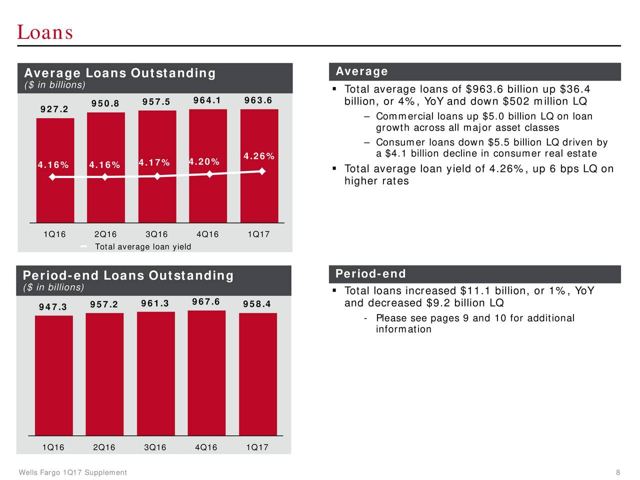 Wells Fargo’s loans (average as well as period-end numbers) are up significantly year over year, but that tells only half the story — on a quarter to quarter basis the numbers look much less compelling. Average loans were down slightly, but period-end loans were down by almost $10 billion dollar, or one percent (which means an annualized decline rate of four percent). This means that loans were holding up well at the beginning of first quarter, but apparently things deteriorated during the first three months of this year. This doesn’t poise well for the average loans outstanding number for the current quarter, which, in turn, will hurt Wells Fargo’s net interest income result in Q2. Strong growth in the company’s loan portfolio has been one of the biggest positives the company experienced in the last couple of years, if this trend reverses now, the benefit of rising interest rates might be offset.

Declining consumer loans were the main factor behind the decline in the size of the company’s loan portfolio, real estate, automotive, credit card and other loans all declined by $500 million or more over the last quarter.

With a smaller loan portfolio (whilst deposits continued to grow), it is not a big surprise that Wells Fargo’s net interest income declined on a quarter to quarter basis: $12.3 billion were still a solid number versus the prior year’s quarter results of $11.7 billion, but $100 million lower than the company’s Q4 2016 results. The net interest margin was exactly flat quarter to quarter, thus the bank apparently was not able to benefit from another rate hike earlier this year. 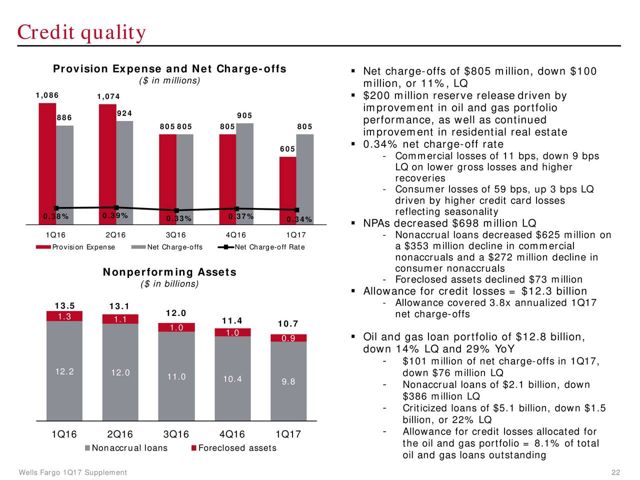 There were positives as well, though, such as the continuing improvements in the company’s credit quality. Net charge-offs were down versus the prior year as well as versus the previous quarter, and provisions were lower by $200 million versus Q4 2016. Nonperforming assets totaled just $10.7 billion in this year’s first quarter, down about 25% year on year. 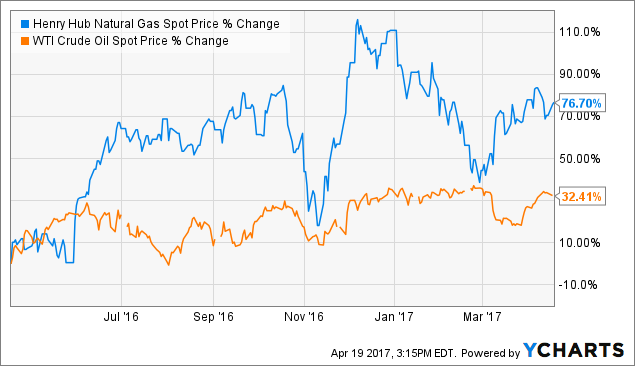 With natural gas prices and oil prices up by 77% and 32% over the last twelve months, it is not a surprise that the company’s oil and gas loan portfolio has been performing much better than during the trough of the oil price decline.

We can summarize that the first quarter was neither a disaster nor very good for Wells Fargo: The company’s loan portfolio looks like it has peaked and will decline from here on, and a higher FED funds rate did not provide for higher net interest margins, but on the other hand the company’s credit quality is better than it has been in a long time, which means there is very low risk for surprising losses for Wells Fargo’s owners.

The share price decline has sent Wells Fargo’s dividend yield up over the last days: 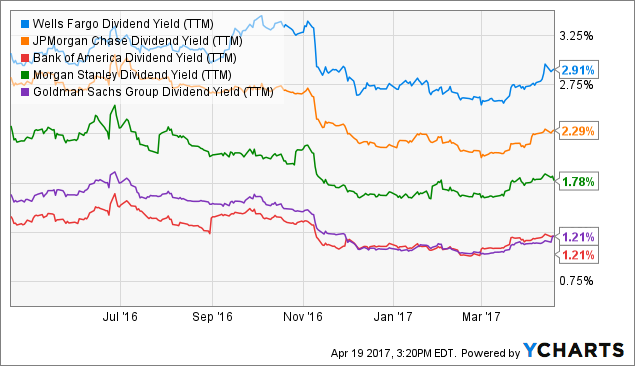 Wells Fargo’s dividend yield is 2.9% right now, much higher than the dividend yields for other major banks (ranging from 1.2% to 2.3%), and also much higher than what investors get from the S&P 500 index as a whole or 10 year treasuries (2.0% and 2.2%, respectively). On the other hand the company’s dividend growth rate has been subdued recently, which doesn’t make Wells Fargo’s shares too attractive for dividend growth investors. I believe shares could be attractive with a yield of more than 3.0%, which would mean a share price of about $50.

An investor willing to pay that much for Wells Fargo’s shares (in order to get an initial dividend yield of at least 3.0%) could sell put options with that strike price in order to generate additional income in the mean time.

The put option contracts with a strike price of $50 and an expiration date of October 2017 (half a year out) are selling for $2.30 right now, which means investors are getting paid $230 per six months in order to keep $5000 on the sideline whilst waiting for a better entry point. This equals an absolute yield of 4.6%, or an annualized yield of 9.4%. This strategy can be very beneficial for those who are willing to buy Wells Fargo’s shares at a lower share price (versus the price shares are currently trading for), but should not be executed by those who are not willing to enter (or increase) a position in Wells Fargo.

Wells Fargo’s first quarter has been mixed: Great credit quality is a positive, but if the loan portfolio has peaked this would limit future upside. Investors should keep an eye on that, maybe the loan portfolio decline was just a little bump in the road.

With more interest rate hikes to come in the next years the macro conditions remain very benevolent, as long as Wells Fargo manages to benefit by a wider net interest margin.

The dividend yield is attractive versus other bank stocks, the broad market and treasuries, but due to the low dividend growth rate it might be better to wait for an even lower share price.

BinaryFest.com - May 2, 2018
0
To answer that question, yes, we may be entering a 2018 bear market. Bear markets arrive unannounced, of course, but the action on...

How do you learn to be an expert in forex trading?