Enjoy this Seeking Alpha article chilled, with a side of fries

It’s not hard to find smart people who think the US stock market is dangerously overvalued these days. In a recent piece in The Economist, Ray Dalio, manager of the world’s largest hedge fund and perhaps the best macro observer of our time, stated that the period immediately following the 1929-32 stock market crashes (i.e. the Great Depression) was “the last time that the global configuration of fund­amentals was broadly similar to what it is today.” Further, a recent survey of fund managers found that 83% of them thought that domestic stocks are too expensive – the highest rate since just before the dot-com bust. Even the Federal Reserve seems to agree that domestic equities are too pricey. Minutes from the March 14-15 Federal Open Markets Committee meeting showed that “…some participants viewed equity prices as quite high relative to standard valuation measures”.

A dissenting opinion you can’t ignore

So does anyone disagree with the assertion that publicly traded American businesses are too expensive right now? Well, as a matter of fact, legendary investor Warren E. Buffett has a dissenting opinion to offer. In an interview with CNBC on 27 February 2017, Buffett stated that “measured against interest rates, stocks actually are on the cheap side compared to historic valuations”. 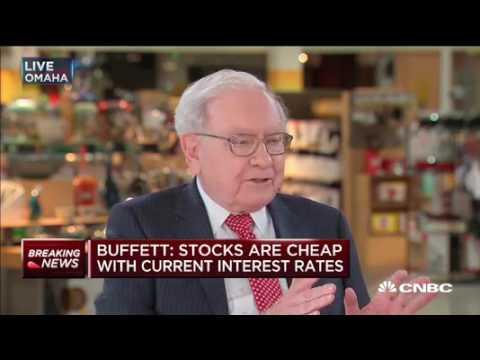 Now for many of us who follow Buffett, this statement probably came as a shock given that Buffett’s Berkshire Hathaway (BRK.A, BRK.B) has been amassing cash on its balance sheet at a rate that strongly suggests that Buffett is preparing his firm for a buyer’s market. Just days before the CNBC interview, Buffett even implied as much in his 2016 letter to shareholders when he wrote:

“Every decade or so, dark clouds will fill the economic skies, and they will briefly rain gold. When downpours of that sort occur, it’s imperative that we rush outdoors carrying washtubs, not teaspoons.”

Even casual market observers will note that the last bear market started about a decade ago, so Buffett’s statement in his shareholder letter would seem to imply that he thinks the time is ripe for the next crash. So what gives? Talking out of both sides of his mouth is not something Buffett is known for.

What Buffett means by “interest rates”

When Buffett says “interest rates” what he really means is the rate of return on the 10-year US Treasury note. Buffett has stated that when performing a discount cash flow analysis, probably the most widely accepted method for valuing stocks,

“we don’t discount the future cash flows at 9% or 10%; we use the U.S. treasury rate. We try to deal with things about which we are quite certain. You can’t compensate for risk by using a high discount rate.”

Buffett uses the T-note as a benchmark because it is the most common benchmark in the world for many other financial instruments. For example, banks and other lenders use the T-note rate to decide mortgage rates across the US and it is the most liquid and widely traded bond in the world. Further, the 10-year note is extremely sensitive to changes in the federal funds rate, which is directly controlled by the US central bank. These are the reasons why the term “interest rates” is Buffett’s shorthand for the yield on the 10-year T-note. 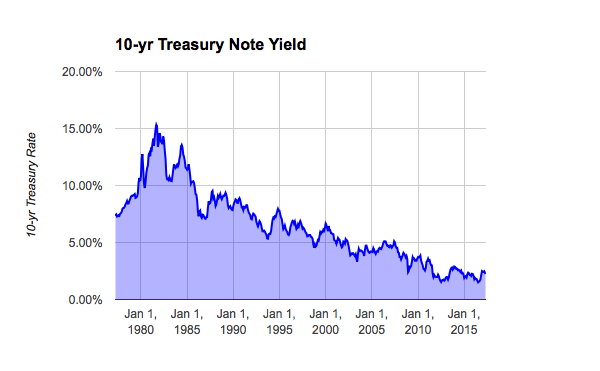 As you can see, treasury yields have basically been in free fall since the early 1980s. We’ll come back to this later as it’s relevant to Buffett’s comment.

But how do you compare a stock with a bond?

Bond yields are pretty straightforward. The yield is fixed and unless the issuer defaults, bonds provide a predictable rate of return. Stocks, on the other hand, are more complicated. Unlike bonds, stocks represent real businesses, and therefore, stock prices should, in theory, mirror the performance and prospects of the firms they represent. The price-to-earnings ratio, perhaps the most common financial metric, purports to show investors how much they will need to pay for the earnings of a business. It turns out that by inverting the price-to-earnings ratio (divide it by 1), we can find the annual expected rate of return that investors should, in theory, expect to receive from equities. This rate of return is known as the earnings yield. So, as an example, Apple Inc. (NASDAQ:AAPL) currently trades at $142.26 per share and the earnings per share for the past 12 months was $8.33. Therefore, if you bought Apple today, you’d pay 17.1 times the trailing 12 months worth of profit. If the next 12 months look exactly like the past 12 months and the stock keeps the same multiple of 17.1, your annual return on investment, or earnings yield, would be 5.8% (1 divided by 17.1). Don’t look now, but we have an annual yield figure for a stock that can be directly compared with a bond yield.

Earnings yields only account for the trailing 12 months’ worth of earnings so they basically project that exact same performance into the future indefinitely to produce an annual rate of return. Of course, no business just replicates its performance year after year indefinitely and, indeed, Robert Shiller even won a Nobel Prize in economics for his attempt at sorting this issue out. Shiller realized that businesses go through cycles where earnings increase and decrease. Shiller’s Cyclically Adjusted Price to Earnings ratio attempts to incorporate these nuances. The CAPE ratio divides the moving average of the last ten years of earnings and adjusts for inflation. This may be an improvement on the standard trailing 12-month P/E ratio, but it still suffers from the limitation that it only looks backward in time to find a future rate of return. Unfortunately, until humans find a way to see into the future, bond yields will always be more certain than equity earnings yields.

What premium is fair?

Now, even a company as solid as Apple isn’t as safe as the 10-year T-note. This is for one main reason – the issuer of the T-note is the US federal government. If the government runs into trouble, it can raise taxes to increase revenue or the Federal Reserve can leverage up its balance sheet (i.e. print money) and buy the bonds that the government issues. Therefore, it is only fair that equity investors should demand a higher rate of return than the return on the super safe T-note. 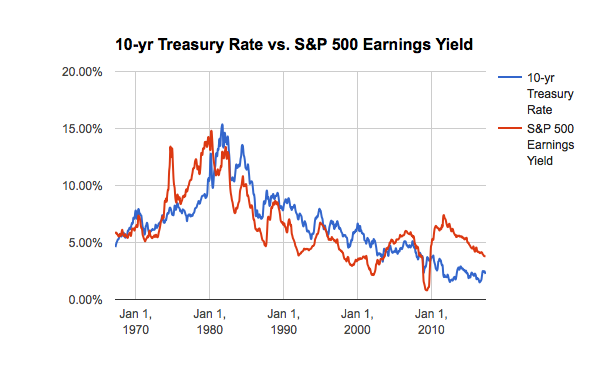 So what do you think of the relationship between equity earnings yields and treasury yields for the past 50 years? Personally, I was surprised to find that T-notes have actually appeared more attractive relative to equities for about half the years out of the last 50. Since stocks are riskier, I expected the S&P earnings yield to almost always be higher than the T-note yield as investors demanded premium for the risk they were taking by allocating their capital to stocks. In other words, I expected the blue line to almost always be lower than the red line. Clearly that’s not what happened throughout most of the 80s and 90s, although that is what’s been happening since the end of the financial crisis. We can also see that the S&P 500 earnings yield has been falling pretty steadily since about 2011 as stocks have been bid up. Falling earnings yields combined with mostly flat treasury rates have narrowed the yield spread between stocks and treasurys for the past several years.

Let’s use Shiller’s CAPE ratio to calculate the earnings yield and see if the chart looks any different. 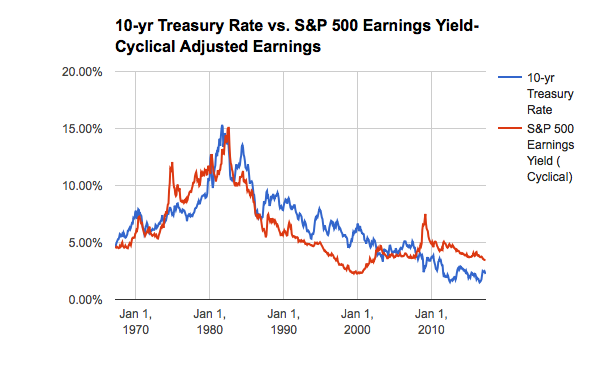 What do you think? The comparison looks a bit different when we use cyclical earnings, but the same general theme holds. Right now, stocks still offer a better expected rate of return than the benchmark 10-year treasury note. This is because although equity earnings yields are at historic lows, they are still higher than treasury yields which are at even lower historic lows!

There’s got to be a ratio for that

Fortunately in the year 2017, there is a financial ratio for just about everything. In this case, what we want to know is whether, as Buffett stated, stocks are cheap when measured against interest rates. Enter the Bond-Equity Earnings Yield Ratio. I like this ratio mainly because it captures the relative value of treasurys versus equities in one simple number. Second, as a military guy, I always appreciate a clever acronym… To find the BEER, you divide the treasury yield into the equity earnings yield (which again is the inverse of the P/E ratio, or 1 divided into the P/E). So, for example, at market close on April 20, 2017, the treasury rate was 2.24% and the cyclically adjusted earnings yield on the S&P was 3.45% (1 divided by a cyclical P/E of 28.85 = 3.45%). Divide 2.24 into 3.45 and you get a BEER of .65.

Let’s see how the BEER looks for the last 50 years to put today’s .65 number in context. I’ll use Shiller’s CAPE ratio to calculate the S&P earnings yield again this time. The chart below captures the exact same data as we saw in Figure 3 but in one, nice neat number (i.e. the number in the y-axis). 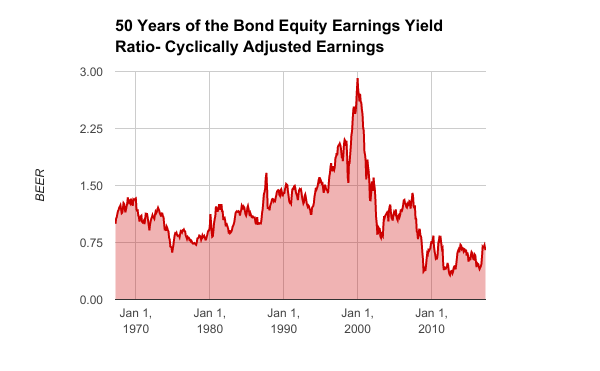 Here we can see that the BEER is historically low and less than 1 indicating that stocks are cheap relative to the yield on the 10-year treasury note. Guess this is what Buffett was talking about.

Now, all that said, this market still freaks me out and I’m holding about 50% of my portfolio in cash. But let’s save that for another day. As a final aside, Buffett’s Berkshire is holding more cash than ever right now, too, so I think I’m in good company. On the other hand, seeing just how cheap stocks actually are relative to treasuries has definitely forced me to reevaluate my position. What do you think?

The Secrets of Forex Copy Trading

This is Going to Sting

The Pros and Cons of a Pooled Trust

Your Guide to Academic Writing Jobs