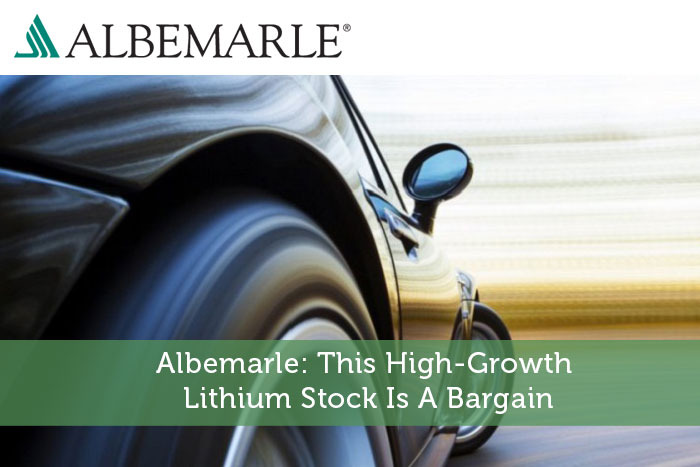 Albemarle (ALB) has dramatically underperformed the market in the last three years. During this period, the stock has lost 5% while S&P has rallied 41%. Consequently, while S&P is trading near its all-time highs, Albemarle is hovering around its 3-year lows.

This divergence is surprising, particularly given the exciting growth prospects of the company, which come from the high growth in the global demand for lithium. In this article, we will analyze whether this top lithium stock has become a bargain.

Albemarle is headquartered in the U.S. but serves approximately 2,500 customers in about 100 countries. It is a global specialty chemicals company, with leading positions in lithium, bromine and catalysts for refineries. have attracted the interest of many investors lately thanks to the booming demand for lithium, which has resulted from the high growth in the number of mobile phones and electric vehicles. The latter require 5,000 to 10,000 times as much lithium as mobile phones.

Albemarle operates in three segments: lithium, bromine specialties and catalysts. In 2018, these three segments generated 53%, 29% and 18% of the total EBITDA of the company. In the year, the company grew its EBITDA and its adjusted earnings per share by 17% and 23%, respectively. Fortunately for Albemarle, its main growth driver is its largest segment, namely lithium, which grew its EBITDA by 19% whereas the other two segments grew their EBITDA by 11%.

While the company grew its earnings per share by 23%, it expects further growth this year. More precisely, management expects additional earnings-per-share growth of 11%-19% this year, from $5.48 to $6.10-$6.50. Growth will be driven by increased volume in the lithium business while the other two segments are expected to remain stable.

Despite its promising growth prospects, the stock of Albemarle has plunged 50% in the last one and a half year. The market has been concerned that national governments will make coordinated efforts to pressure lithium prices in order to promote local battery production. Moreover, a few months ago, state-owned Bolivian miner YLB announced that it would cooperate with German partner ACI Systems to produce 40,000 tons of lithium hydroxide from 2022. Such a move could signal the start of a fundamental shift in the supply, which would exert pressure on the price of lithium. Nevertheless, the decline of the stock price of Albemarle has probably extended too much. 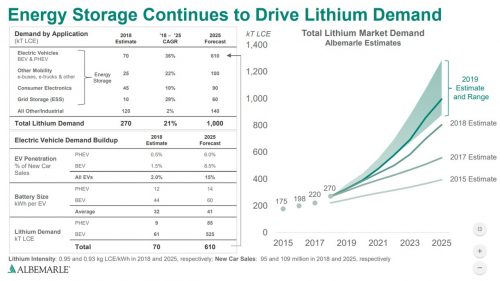 This growth in the demand for lithium, along with the growing demand from other sources, such as e-buses, e-trucks and consumer electronics, is expected to lead the total demand for lithium to grow at an average annual rate of 21% between 2018 and 2025, from 270,000 to about 1,000,000 tons.

The increasing demand for lithium is already evident in the growth trajectory of Albemarle. The company grew its earnings per share by 23% last year and expects additional 11%-19% growth this year while analysts expect additional 9% growth next year. In addition, Albemarle has not missed the analysts’ earnings-per-share estimates for 16 consecutive quarters. This is an exceptional performance record, which confirms the strong business momentum of the company.

Albemarle is also likely to benefit to some extent from the upcoming implementation of the new international marine standard, which will come in effect in January, 2020. According to the new standard, all the vessels that sail in international waters will be forced to burn low-sulfur diesel instead of heavy fuel oil. As a result, the global production of the former will greatly increase from next year. As this product involves great amounts of catalysts in its production whereas heavy fuel oil does not require any catalysts, global demand for catalysts from refineries is likely to rise from next year.

Stocks in the materials sector are very sensitive to commodity prices and hence they are highly cyclical. Consequently, it is very hard to find stocks with a long dividend growth streak in this sector. Albemarle is a bright exception to this rule, as it has raised its dividend for 24 consecutive years. This exceptional growth record is a testament to the strength of its business and its execution. This year, management raised the dividend by 10%. As a result, the stock is now offering a 2.0% dividend yield.

Despite the impressive dividend growth record, the dividend yield of the stock is lackluster and hence investors should not purchase the stock for its dividend. On the other hand, the important aspect of the dividend growth streak is the fact that it confirms the strength of the business model of the company.

Materials stocks are highly cyclical and thus they are vulnerable to recessions. Albemarle is not an exception, as its production volumes and its selling prices are likely to incur a significant decline in the event of a recession. As a recession has not shown up for a whole decade, this is a significant risk factor to keep in mind.

Nevertheless, it is important to note that the company has a remarkably strong balance sheet. Its net debt is only $2.0 billion, which is only three times its annual earnings, while its interest expense consumes only 7% of its operating income. Thanks to its healthy balance sheet, the company will easily navigate through the next downturn of its business, whenever that arrives.

Based on the mid-point of this year’s guidance, Albemarle is trading at a forward price-to-earnings ratio of 11.6. On the one hand, a somewhat low price-to-earnings ratio can be justified by the high cyclicality of the stock and its vulnerability to recessions. On the other hand, given its promising growth prospects, the stock seems cheaply valued right now, with its reward potential outweighing its risks.

Albemarle has an exceptional dividend growth record for a materials stock. Moreover, it has exciting growth prospects thanks to the high growth in the number of electric vehicles, which require great amounts of lithium. The growth of electric vehicles is only in its very early phases. As a result, Albemarle seems to have many years of growth ahead. Thanks to its growth potential and its cheap valuation, the stock is likely to highly reward investors from its current price in the absence of a recession.

BinaryFest.com - June 24, 2018
0
Last week here I wrote about the three SPY expirations. The Wednesday one changed quite a bit during the week (which I posted...

Always Have Boogers? Main Causes and Reasons Why!