AMC (NYSE:AMC) is the largest theater exhibitor in the United States, in Europe, and in the World. The movie industry in North America has consistently had record box office years and the line-up of upcoming movie releases should ensure that trend. AMC’s 4th quarter earnings resulted in all-time records for all of its revenue segments. AMC has a competitive advantage due to its well-located and highly productive theaters and substantial operating cash flow.

The company’s enhanced food and beverage strategies like the MacGuffin Bars, Dine-In-Theaters, and revamped menus with margins of 86% are areas of value creation. The AMC Stubs are a highly successful marketing strategy, which contains the highest customer membership in the industry.

AMC’s acquisitions of Odeon, Carmike, and Nordic will allow its operations to reach suburban and rural United States, western and southern Europe, and Scandinavia, Nordic, and the Baltic Region. With these acquisitions, AMC is able to implement its highly successful strategy of a premium movie experience to its customers around the globe. This will allow AMC to create greater value for its shareholders in the future.

AMC’s CEO Adam Aron stated, “The movie industry in North America also notched another record year, the fourth record, the fourth record year in the last five, with gross domestic box office growing 2% year-over-year to $11.4 billion.” The chart below shows the positive 14-year trend of the North American Box Office. The other chart shows the North American CAGR at 5.2% from 2014 to 2016 and the European CAGR at 6.5% in Box Office Earnings. European theatre attendance has been steadily growing especially in the UK, German, Italy, and Spain where AMC is the #1 theater chain with its Odeon subsidiary.

The movie production industry is highly concentrated with Regal Entertainment Group (NYSE:RGC), AMC Entertainment, Cinemark Holdings (NYSE:CNK), and Cineplex generating approximately 65% of box office revenues in 2016 and this is up from 35% in 2000. AMC has outperformed its competitors due to its competitive strengths of a leading position in diverse markets, well located and highly productive theaters (five of the ten highest grossing theaters in the U.S. were legacy AMC theaters), substantial operating cash flow, experienced and dynamic team, film content, and food and beverage margins.

AMC in these strategies is able to provide its moviegoers with an industry leading experience. AMC is known for their recliner seat innovations, which results in 40% to 60% increase in attendance at these recliner chair locations. This innovation implemented across all the new theaters acquired, with their large geographical presence, due to the recent acquisitions will drive up attendance. Another area of value creation is food and beverage with margins increasing to 86%.

Implementing AMC’s Dine-In-Theaters and MacGuffin Bars into the acquired theaters will drive growth. Also, recent menu revamps with selling more premium food, will increase margins even more. AMC’s loyalty program, AMC Stubs, has had sign up rates of 400 to 500 thousand members each month, which also helps drive attendance. AMC distinguishes themselves from their competitors due to their premium large format (PLF) theaters and partnership with IMAX and Dolby Cinema. Look at the difference between a pre-renovated theater and an AMC PLF renovated theater below:

Implementing all these AMC strategies into the newly acquired theatres around the globe will drive up admissions and margins thus creating value for shareholders.

AMC Entertainment Holdings’ CEO, Adam Aron, stated, “AMC set new all-time high records for every revenue segment and adjusted EBITDA exceeding $3 billion in total revenues for the first time ever, growing nearly 10% to a record $3.2 billion with revenues in 2017 likely to exceed $5 billion.” Adam Aron also stated, “AMC has never been better positioned to leverage our proven strategic initiatives across a growing platform both here in the U.S. and across the globe.”

During 2016, AMC opened 2 new theatres with a total of 17 screens and acquired 520 theatres with 5,201 screens. However, the impact of the recent acquisitions of Odeon, Carmike, and Nordic must be considered when analyzing these earnings records. Aron stated, “AMC would have set revenue and adjusted EBITDA records even without the December contributions that came from Odeon and Carmike.”

AMC is now 50% larger than the next largest competitor in Regal Entertainment Group. AMC has created a much larger platform to leverage its scale for growth and benefits its guests, associates, and shareholders. The M&A transactions have resulted in AMC having 389 million in attendance, over 1 thousand theaters, over 11 thousand screens, and approximately $5.45 billion in revenue. 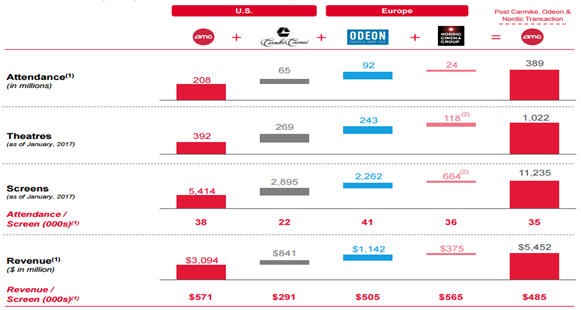 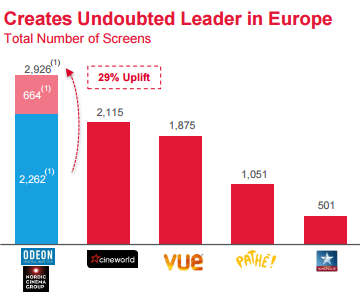 The ownership type chart is shown below. Investment advisors own 67.52%, hedge fund managers own 14.96%, and unclassified own 12.09% of common shares outstanding. There has been an increasing position in shares outstanding held by hedge fund managers and the holding company, since the beginning of the fiscal year. The short interest is at approximately 3.9 million, which is a 1.7 million positive change in short interest. This large amount of change is due to the recent equity offering by AMC drastically increasing the volume of its stock. The short interest ratio is at 3.01, which is near AMC’s lowest SI ratio; however, there has been an increase of 1.77 in the SI ratio. There is an average of 2.85 days to cover the short interest for AMC. 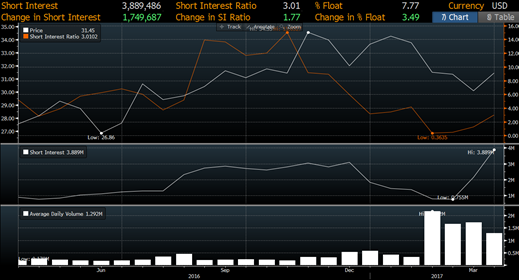 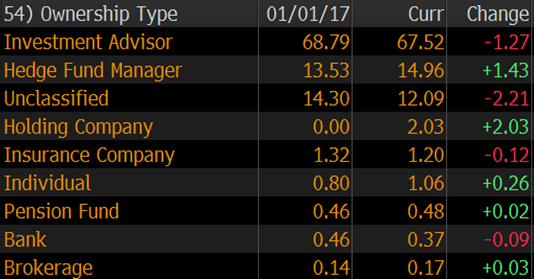 As of December 31, 2016, Dalian Wanda Group, one of the largest privately-held conglomerates in China, has a 68.83% ownership stake in AMC and owns more than 86% of the combined voting power. Wanda is the largest theater exhibition operator in China. Dalian Wanda acquired AMC in May 2012, which was the largest Chinese acquisition of an American company. The company made major changes in AMC’s theater design and layout, including reclining seats, waiter service, and expanded food and drink offerings.

Ticket sales at AMC nearly doubled in the 18 months following the acquisition. Dalian Wanda is listed as a key strategic shareholder and as a competitive strength for AMC. It enables AMC to enhance relationships and obtain better terms from food and beverage, lighting, and theater supply venders, and to expand their strategic relationship with IMAX and Dolby. On February 13, 2017, AMC completed an additional public offering of 19,047,619 shares of Class A common stock at a price of $31.50, resulting in net proceeds of $579 million.

On February 17, 2017, AMC completed another additional public offering of 1,283,255 shares of Class A common stock resulting in net proceeds of $39 million. Last January, AMC’s public float was 21.6 million shares and now it has more than doubled to 55.7 million shares. Adam Aron has been the Chief Executive Officer, President and Director of AMC since January 2016. Aron was CEO of Starwood Hotels and Resorts Worldwide and served as CEO of World Leisure Partners. Key executive compensation has been steadily increasing and has rapidly increased with the approximately $11 million for the CEO. Adam Aron showed confidence in AMC by recently purchasing $1 million worth of AMC stock personally.

AMC Entertainment Holdings has a large amount of debt due to its acquisitions of Odeon, Carmike, and Nordic. AMC, pushed by its majority stakeholder, the Dalian Wanda Group, has made numerous acquisitions to expand its growth. AMC acquired Odeon for approximately $617 million, Carmike for $858 million and Nordic for $631 million. On November 8, 2016, AMC issued $595 million aggregate principal amount of its 5.875% Senior Subordinated Notes due 2026 and $250 million of its 6.375% Senior Subordinated Notes due 2024.

AMC also completed an additional public offering (discussed above) resulting in net proceeds of $618 million. AMC’s high amount of operating cash flow will also be used to fund the acquisitions. Management discussed how the $0.80 annual dividend per share should not be affected. AMC’s increase in total debt, capitalization, and cost of debt, WACC, and ROC/WACC compared to its competitors are shown below.

In conclusion, AMC Entertainment Holdings is a buy at its current price due to its upward growth potential. AMC has the competitive advantage of offering its customers the best movie-going experience with its film content, comfort and convenience with recliner seating, superior food and beverage with MacGuffin Bars and expanded food offerings, and premium sight and sound with its partnership with IMAX and Dolby Cinema.

This superior movie-going experience will be expanded globally due to the acquisitions of Odeon, Carmike, and Nordic. This will lead to greater theater attendance by international customers due to this superior experience and will result in greater revenue growth for AMC. With these acquisitions, AMC is well positioned for continued success as the #1 operator in the U.S., Europe, and the World. AMC Entertainment Holdings’ one-year target price of $37.69, a 21.28% price return, is reasonable due to their upward growth potential.

Facts and Fallacies About Risk/Reward Ratios

BinaryFest.com - April 18, 2017
0
One will commonly hear or read the following “rule of thumb” for trading:Only trade positions with potential profits of at least three times the...

Books Set in Turkey – Five Novels to Read Before You...

SMARTening Up Your Goals – Gain Your Goal Setting Advantage and...

The Beige Book Report – Is the US Economy Further Slowing...

So Here We Are | Slope of Hope