AveXis, Inc. has just a single product in its pipeline, AVXS-101 (scAAV9.CB.SMN; charisma). AVXS-101 is an AAV (adeno-associated virus)-based gene therapy, intended for the treatment of Spinal Muscular Atrophy (SMA).

SMA is an orphan disease that affects the part of the nervous system that controls voluntary muscle movement. SMA causes motor neuron loss and progressive weakness and muscle deterioration and is one of the most common genetic causes of infant death. There are four sub-categories of SMA, from Type 1 to 4, ranked according to severity.

SMN or Survival Motor Neuron is a protein that is vital for normal motor neuron signaling and function. SMA Type 1 occurs whenever the deletion or mutation of chromosome 5 in the SMN1 gene happens, thereby preventing the production of adequate levels of functional SMN protein.

AVXS-101 is designed to improve the motor neuron function in SMA patients by causing an increase in SMN protein levels. This is done by delivering a functional copy of a human SMN gene to the nuclei of the motor neuron cells.

AveXis’ IPO has been backed by crossover investors (also known as VC-backed IPO). These investors still own a good percentage of the company. Interestingly, there is a clear discrepancy between insider and institutional ownership for AVXS. Speculation for the company has triggered a high demand by Institutions which have pushed up the stock price.

The latest information indicates 92.3% institutional ownership in AVXS stock when compared to 41.5% in March 2016. 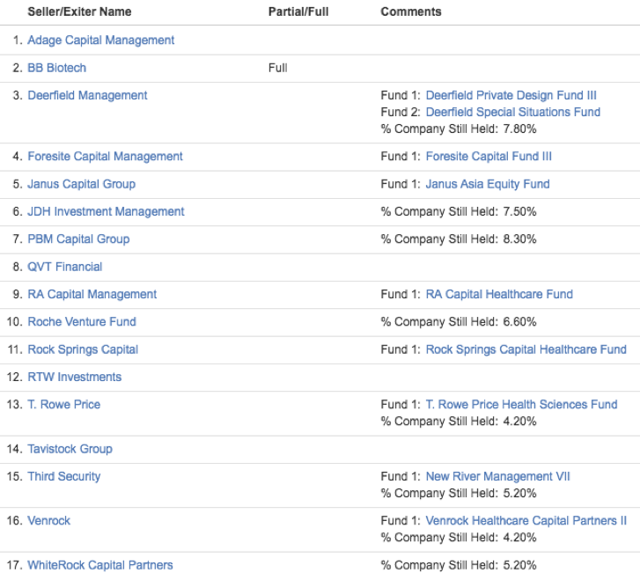 In the opposite direction, the insider ownership decreased from 8.29% in March 2016 to 7.55% in February 2017. Although one of the major investor, T. Rowe Price, has recently dumped a large number of shares and director Paul Manning also reduced his shares from 10% to just 0.82%, CSO Brian Kaspar is the only key owner who still holds 6.69% of shares outstanding.

There is also an increase in the short % of float (26.27% of shares outstanding) for AveXis. The company currently has a short ratio 18.41%. 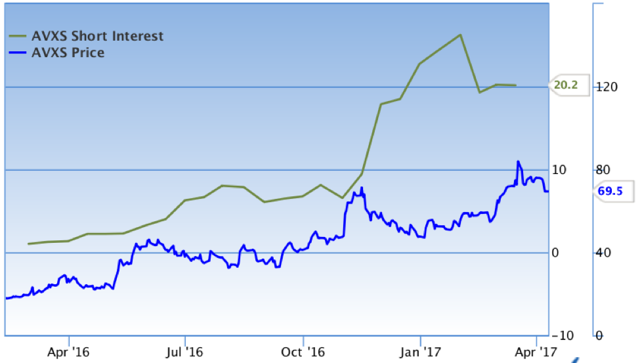 AveXis has a few positives that can potentially propel its stock price higher.

However, there are some questions regarding the authenticity and accuracy of the trial data, which will be discussed in later sections. 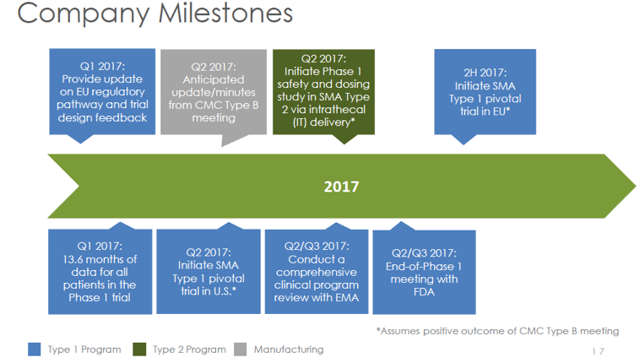 On the flip side, the enrollment of patients is not yet complete, and it may prove to be difficult if Spinraza (NASDAQ:IONS) (NASDAQ:BIIB) gets its approval in Europe before AveXis finds the patient pool.

However, Spinraza has definite advantages over AveXis, which are noted in the later sections.

Although there are a few positives for AVXS as listed above, the negatives outweigh these by a large margin. Following are the major challenges and headwinds for AveXis.

There are many SMA drug development programs currently available. Any of these programs can make breakthrough discoveries, rendering AVXS-101 as obsolete. 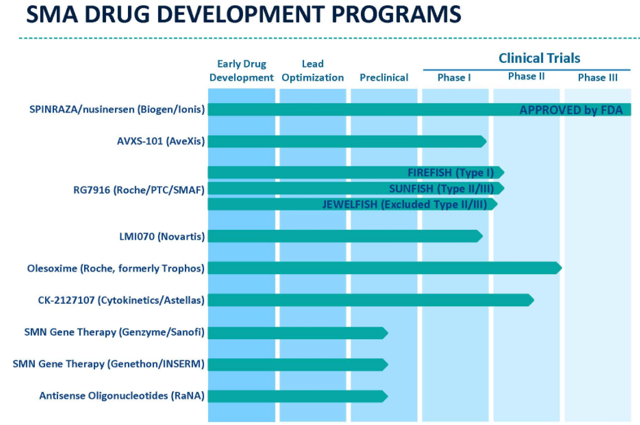 The top two competitors among those are Spinraza (covered in detail in an upcoming section) and RG7916 Roche-PTCT (NASDAQ:PTCT) whose launch date is scheduled for 2020. RG7916 Roche-PTCT is a small molecule and is less riskier than the intrathecal delivery of scAAV9 AVXS-101. 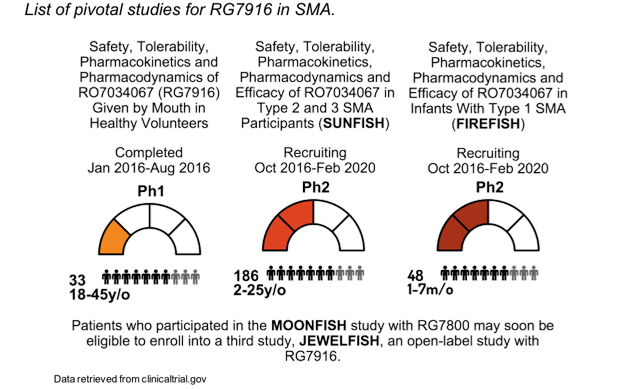 The company that has just one product which is yet to be proven, that hasn’t even reached phase 3 trials, has been given a valuation of $2 Billion. This translates to nearly 20 times the peak sales for the total addressable market that includes never treated and new Type 1 SMA patients.

Spinraza-only dominated market will have an estimated peak sales of $2.2 billion worldwide in 2021. Less than 50% from US only. According to Leerink, Biogen expects approximately 1,700 patients will start Spinraza treatment in 2017 and 2018, with a very optimistic forecast of 5,000 patients in 2021. In the U.S., according to the SMA Foundation, there are an estimated 9,000 to 25,000 patients, with 600 new patients every year. Assuming a 2020 U.S. launch for AVXS-101 based on accelerated approval pathway, AveXis will face a fierce competition from Spinraza, which might raise higher entry barriers possibly by cutting down its price, and by more affordable small molecule Roche RG-7916. Although we should acknowledge the fact that AVXS-101 is a one-time curative dosage, we need to consider a smaller number of never treated and new patients who will be able to afford the new drug. Considering the coverage of Spinraza as comparable, we might assume that AVXS-101 will target 500-1,000 subjects with Type 1 SMA. A price of $150,000-200,000 above the monopoly price of Spinraza in 2020 should be considered. This will ultimately result in an estimated sale of $75-200 million. Sell-side analyst Jefferies had an estimate of $323M in risk-adjusted peak sales for 2030 in case of commercial failure and $95 million supported by other SA authors.

Interestingly, analysts at Chardan, which investment banking service acted as co-manager and underwriter of the offering, set an unreasonably high price target of $102.5 for AVXS; 10-20% higher than the generally estimated target price by Jefferies and GS.

Even with an increase in short interest, unusual stock trading patterns, losses, and message board chatter, AVXS has been moving steadily upwards with very low volume.

The fact remains that the current price point is already discounting the smooth and easy approval of Phase 1/2, minimal spending on Phase 3, and quicker turnaround time to the market. Any hitch in any of these aspects can result in a speedy selling, especially from institutions.

Here are the quick facts:

Although there are reports that the future phases and studies will be conducted at multiple centers, there has been no confirmed news about the details or even the number of centers yet.

Following are some other risks associated with AveXis:

The overall verdict on AveXis, Inc. is a Strong Sell. At current price AVXS is estimated to be overvalued by 30%, translating to a target price of top $56, low $30.

The stock may see a little more upside during the next three months, thanks to the catalysts like:

1. The high cost, multiple dosages and warning labels of Spinraza.

But the inability to redose AveXis for SMA patients who plateau could end up making this a great opportunity for Spinraza.

However, these results raise questions which are yet to be completely answered.

3. Ongoing talks with regulatory authorities of US and EU for expeditious marketing approval of AVXS-101.

Meanwhile, Spinraza is getting closer to getting approval in EU.

4. AVXS milestones like AAN meeting, the planned Type B CMC meeting with the FDA, FDA end of Phase 1 meeting etc.

But in case these meetings do not go as well as AveXis expects, even a small delay could set prices plummeting, as these factors are already accounted for in the current price point.

Despite the positives, the increasing number of red flags and obvious headwinds for AVXS indicate that the stock is on borrowed time, a candidate for a massive selling spree. This conclusion is based on a plethora of factors like:

The bottom-line remains that AveXis is single-drug company that is targeting a comparatively small part of an already small market, whose trial was conducted at a center that has a financial stake in the outcome, whose founding people have questionable reputation, whose very ownership of AVXS-101 is under a lawsuit, and is also in a direct competition against an FDA approved standard of care Nusinersen, which has an irrefutably proven efficacy from its multi-location trials. It is glaringly obvious that AVXS has no margin of safety should AVXS-101 fail. With many signs pointing to this possibility, remaining short on AVXS would be a smart move in the long run.

Is Forex Decimator A Scam, Find Out The Truth About Forex...

Trading for a Living – How to Beat the Forex Market