Shares of BeiGene (NASDAQ:BGNE) have risen over 20% in the past year with investor confidence rising as late stage studies are initiated for the firm’s promising clinical candidates.

The $1.5 billion Beijing-based company is advancing a deep pipeline of internally discovered candidates, with all compounds in clinical studies both in China and worldwide. 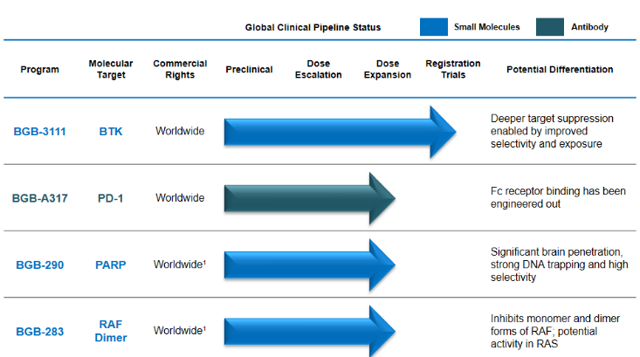 Lead asset BGB-311 is the company’s potent and highly selective small molecule BTK inhibitor (Bruton’s Tyrosine Kinase), which based on preclinical studies could be more selective than ibrutinib, leading to less off target inhibition of other kinases and therefore lower toxicity. Ibrutinib (Imbruvica) did $511 million of sales in the fourth quarter of 2016 alone.

As for the company’s PD-1 inhibitor BGB-A317, on April 21st management announced the first patient has been dosed in a pivotal study in patients with relapsed/refractory classical Hodgkin lymphoma (CHL). They believe the asset is differentiated from currently approved PD-1 antibodies due to its ability to bind Fc gamma receptor I specifically engineered out, which could result in improved activity.

The company reported a year end 2016 cash balance of $368.17 million, compared to $100.49 million as of December 31, 2015. Research and development expenses for the quarter were $28.9 million and for the full year $98.3 million, quite an increase from $28.10 million and $58.25 million, respectively. This was due to the company´s increased activity in the clinic as programs progress into pivotal trials. I assume dilution or another form of funding will be necessary in 2018.

Also of note, the company will be building its own commercial biologics manufacturing facility in Guangzhou, Guangdong Province, China as part of a joint venture with Guangzhou Development District. Expected direct investments total $330 million to support research and development efforts in China.

Also, the Baker Brothers have been aggressively adding to their position with a total of 3.673 million shares. FMR, Hillhouse Capital Management, Wellington Management Group, and Orbimed Advisors also own significant stakes.

It is noteworthy that in China no immune checkpoint inhibitors are currently approved, an area of significant unmet patient need. Management has shown themselves to be uniquely competent in progressing candidates in a swift manner. Investors would do well to remember that China is home to almost a quarter of the world´s cancer patient population and one-third to one half of cancer patients in certain tumor types. 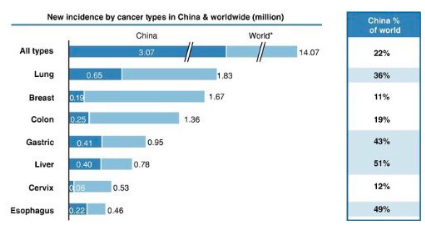 Shares are at relative highs, although they have pulled back significantly since almost hitting $42. I believe the company is an intriguing though speculative long term story- investors who have done their due diligence and agree might be best served to establish a small pilot position in the near term, waiting for future volatility and dips in share price before adding to their position.

Risks include those typical of biotech, including trial setbacks, regulatory risk, disappointing data, and dilution in the medium term (2018). Additionally, the so-called China discount applies here, as disclosure and transparency have been troubling issues in the past for investors holding shares in Chinese companies.

Author’s note: My goal is to identify undervalued stocks for my readers with favorable risk/reward profiles and catalysts that could propel shares higher. I categorize ideas into near-term, medium-term (months to a year), and long-term (multi-year), based on when I expect outperformance to potentially occur. I also highlight intriguing dividend picks for my 20/20 model income portfolio, a strategy that balances diversification, yield, and capital appreciation in a unique manner. If that interests you, consider clicking the follow button at the top of the article, next to my name. For my real-time followers, on my blog I also post bi-weekly watch lists to discuss names on my radar and fielding your suggestions, as well as occasional market/sector overview pieces and interviews with corporate management.

BinaryFest.com - May 20, 2017
0
This week, FinanceFeeds announced that Isreal’s Police swoop and start captures of people involved in financial fraud with binary options. Just to remember,...

3 Benefits of IRAs and 1 Drawback: What You Need To...

4 Ways to Use Pivot Points in Your Forex Trading

How Paying Off Your Mortgage Early Helps You Retire Sooner