I’ve been pretty negative on Verizon (NYSE:VZ) lately and wanted to write a post in response to a comment from @Ted Fischer from a recent article I wrote (Verizon: Don’t Chase The Yield):

Payout ratio as reported by Yahoo Finance is probably div. per share divided by EPS for 2016. Does that check?

The author is focusing on FCF, which is appropriate but can be volatile. He needs to look at it in greater depth rather than just offering the numbers.”

To address Ted’s first comment, yes, most data sources online have payout ratios that use earnings, which is very misleading. I use free cash flow since this is the cash flow that’s left over for discretionary spending. It’s also a better way to compare companies in different sectors since it accounts for capital expenditures.

This post will mostly focus on Ted’s second comment. I’ll dig much deeper into Verizon’s cash flow statement, which should shed more light on some of my primary concerns for Verizon, which includes:

I want to reiterate that I don’t believe Verizon will cut its dividend. Verizon is known as a dividend stock and they will do anything to keep the dividend going. However, I believe investors should still remain equally concerned (or even more concerned) because the dividend payment has trended towards unsustainable. Just because a company makes a dividend payment, doesn’t mean they should or that the company is financially healthy. I also believe that Verizon’s dividend payment has become a major factor in corporate decisions. Essentially, Verizon has now become a slave to its dividend and it’s shaping the future of the company. There’s been two interesting corporate decisions that point to this:

When reading through the rest of this article, don’t forget that dividend-paying companies have a few levers to use when paying dividends:

Verizon has very little cash, is over-leveraged (both from debt and pension obligations), and has already been selling assets. To me, this puts an extra amount of pressure on them paying dividends with only free cash flow production. 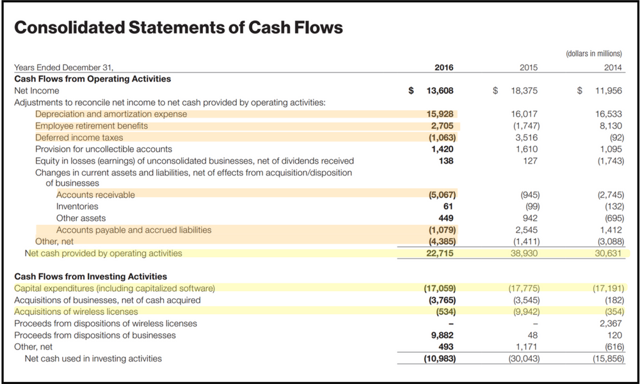 Verizon’s cash flow statement is anything but simple. The only predictable drivers are earnings and how much is spent on capital expenditures. After that, it’s generally a mash-up of various non-cash add-backs and balance sheet movements that can vary significantly from year to year:

I consider Verizon’s cash flow from investing activities to be much easier to understand. Capital expenditures are normally pretty predictable and normally around $17-$18 billion per year. Verizon also provides guidance to this figure. In calculating free cash flow for Verizon, I normally also include purchases/sales of wireless licenses because these licenses are critical to Verizon’s business and they couldn’t continue indefinitely without purchasing them.

When I look at the large reduction in free cash flow from 2015 to 2016, there are a few things to point out. The first was normal movements on the balance sheet and other factors like reductions in deferred income taxes. Movements in such items are hard to predict year to year and generally balance out over time, so this doesn’t concern me. What concerns me most is the reduction in Net Income, which was a result of all main revenue lines decreasing (note – the 3 following quotes are from Verizon’s 2016 annual report):

Decreasing wireless sales is what really hurts. This is Verizon’s high margin revenue and one of the main reasons they spent $130 billion to acquire Vodafone’s (NASDAQ:VOD) 45% stake in Verizon Wireless.

Verizon using their device payment plan receivables for asset-backed securitizations is a second major concern. When I first glanced at their cash flow statement, I saw that there was a ($5.1) billion impact due to an increase in current accounts receivable. This decreases operating cash flow, but is normally of little concern because those receivables will be collected in later periods and have a positive effect on operating cash flow.

So far, the first quarter of 2017 has confirmed some of my concerns. Revenues continue to decrease relative to the previous quarter, which included a 4.5% consolidated revenue decline (excluding divestitures and acquisitions). The amount of wireless connections also decreased for the first time.

A couple of observations from Verizon’s Q1 2017 cash flow statement:

Let’s take a look and see what Verizon’s Q1 2017 payout ratio looked like:

Verizon produced negative free cash flow. I will say that it’s not as bad as it looks because Verizon made $3.4 billion worth of voluntary contributions to its pension fund. While Verizon does need to work this liability down to $0 over time, if this is deducted from my analysis above, Verizon would have produced $1.8 billion in free cash flow, but this would have still been short of the $2.4 dividend payment. As I pointed out above, Verizon increased its debt during the quarter, which helped make up the difference.

There are some concerning developments in Verizon’s business. In future earnings releases, I’m going to be looking to see if there’s further degradation in Verizon’s revenue stream, further increases in debt, and continued weakness in free cash flow. Again, I don’t see Verizon cutting its dividend any time soon, I just see it being burdensome and negatively impacting Verizon’s decision-making and financial practices.

The $10 billion spent every year on dividends could instead be used to build up cash reserves or pay down debt. One of the main reasons I feel this way is how much aggressive consolidation has occurred in the communications and entertainment industries. This consolidation is likely to continue, but Verizon is in a tough position to make any major moves given their leveraged position. I also believe that Verizon faces tremendous risk during the next recession when credit markets tighten. Until I see better performance and consistently higher free cash flow, I’m going to remain negative on Verizon.

Wednesday Window Dressers vs the Fed as Assets Continue to Bubble

BinaryFest.com - June 29, 2017
0
There's a battle going on at the top of the market.   Four Fed speakers this week pulled out their pins and took a...

Implementation of a collar to protect profits accumulated in Royal Bank...

Ways To Do Data Entry From Home

Casinos and Indian Gaming in USA

The Parents Guide to Insurance for College Students