Challenging widely held beliefs always exposes the author to blow-back. In fact, one of my readers made the following comment……

“… Excellent read … bound to shake some trees, can’t wait till see what nuts fall out.”

Well, I hardly had enough time to put my pen down and up pops an article on SA …. “Accumulate $1 Million By Dollar Cost Averaging AT&T” authored by a die-hard DCA enthusiast.

This author’s article gave me the opportunity to apply the very concepts I put forth in my “DCA is a Myth” article. Unlike situations where I selected the data … a rare opportunity was before me … I could simply use a DCA enthusiasts own illustrations to confirm or deny the premise of my article. So here goes:

Let me start my summing up the strategy promoted in the “pop-up” article.

1) Accumulate $1 Million (surmised from the title)

Before I go into an analysis of DCA vs Lump Sum as laid out, I need to address a couple of items.

First, fundamental to any DCA strategy is the discipline to invest in all markets … up and down. By making a commitment to DCA, the investor is assumed to have overcome the emotional barriers to this.

In fact, the DCA author states … “… When the investor commits to this strategy, it takes all emotions completely out of the equation…”

REALLY? Someone makes a commitment to invest $20,000 each year for the next 30 years … into one single stock … and they remove all emotion in the future … come what may.

Is a twenty year commitment to invest somehow more sacred than a marriage commitment till “death do us part” which has about a 50% completion ratio?

Second, the DCA picks a dividend stock and ignores the financial value of reinvesting the dividends. YES … as hard as it is to believe … ignoring reinvesting dividends over 30 years. Well, not completely …

…”…None of these numbers accounts for the reinvestment of dividends to buy additional shares. Had we accounted for that, the share count would be much higher now….”

Well, I’m not going to just ignore dividends and make DCA look worse than it is … though it bolsters my case to ignore them I can’t allow myself to present such a flawed argument.

So, I reinvested dividends in my calculations. Let me point out that because the DCA author was using a 30 year x $20,000 DCA strategy this calculation is not simple …. it required a 14 column spreadsheet. No wonder it wasn’t done.

Here’s a graph showing the importance of including reinvested dividends in the calculation.

Let’s look at it in table form:

Now this might seem “way out of whack”. But remember this is compounded annual growth of dividends over a 30 year period. Furthermore, as with many dividend achievers there’s relatively more value in the dividends stream than the growth component.

Now don’t you think a difference this significant warrants the complete math?

But, be it as it may, I will adjust my analysis to overcome the shortcomings.

Let’s return to the original question … Is DCA superior to Lump Sum?

I’m going to get there, but first a little side-track is necessary.

Consider this … when one compares DCA to Lump Sum … dividend achievers are put at a disadvantage to growth stocks. That is because dividends, which represent a proportionally larger part of the rewards, are stretched out and compounding is reduced. This will become apparent as I move forward.

But I’m still stuck with some items and have to clear them up. Of all the companies and stocks that could have been picked I’m lost as to why AT&T.

Here’s a table that illustrates the results of allocating $20,000 yearly… just as the author does … only reinvesting dividends … comparing AT&T with the S&P500

I have other questions that are unanswered, like why would anyone suggest someone make a 30 year commitment of $600,000 towards one and just one stock? Your guess is as good as mine.

First, we must appreciate that a 30 year commitment of $600,000 to DCA is extraordinary. It’s not like spreading $20,000 over twelve months … which would be a more typical DCA time frame.

Because the time frame is so unusual, it is ludicrous for me to compare a $600,000 lump sum to this DCA. We all know what the answer is.

Instead, I’ll back into the lump sum by solving for the end result. That is …

“How much of a Lump Sum Investment would have equaled the results of $20,000 per year for 30 years?” 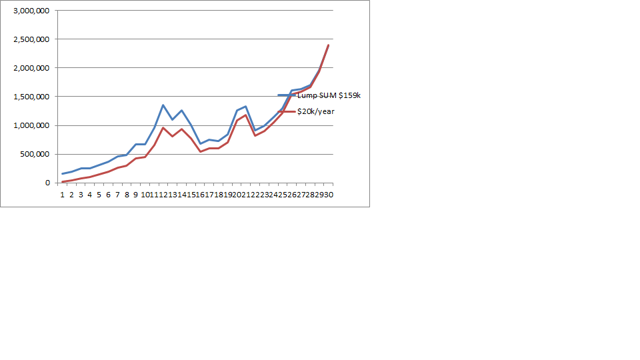 Also we cannot minimize the end result of this $159,000 lump sum investment. An account 30 years hence that’s worth nearly $2.5Milliion dollars that will be throwing off dividend income in retirement of over $150,000 per year. Did you expect that to come cheap?

Summary: Anyone can “juggle” numbers around to fit whatever scenario they choose. The real question is whether the “juggling” is intended to obfuscate or enlighten.

In his article I attempted to show that the idea of investing $20,000 per year for 30 years as recommended in a “competing” article distorts reality.

First, it overestimates the amount of annual deposit necessary to accumulate $1 Million by a factor of 20:8 (or 2.5 times).

Next, It uses a stock that has below market returns, further over-estimating the amount necessary to accumulate $1 Million.

Lastly, by avoiding a Lump Sum deposit, it requires almost $450,000 more in total outlay. This is not an insignificant sum.

Good News for DCA: All is not lost for DCA. It does have a positive side, though it remains hidden in the promoter’s vault. DCA is very effective in overcoming inertia … overcoming buyer hesitancy.

There are countless instances I can recall that the “Nervous Nellie” investor was coaxed into investing by exposing them to the DCA Myth. This is a good thing because the historical record shows that investing has risks but the rewards are also there.

The problem occurs when DCA is promoted as some “fancy-dancy” way to return profits using vague “selling points” such as “reducing average costs.” As if average cost translates to greater profits..

Conclusion: Have some comfort everyone. I’m perfectly aware that $159,000 of lump sum is unrealistic for many people. I’ll contend, however, that it is no where near as unrealistic as $20,000 per year for 30 years.

But the purpose of this article has yet to surface. So here it is … mind it well …. Lump sum beats DCA two thirds of the time. This article was but one example utilizing a DCA enthusiasts program.

The problem with DCA is it pushes time out. Sure it may average you a lower price, but it lowers your average TIME invested. And as we all know, time and compound interest trumps price.

A Little Philosophy: A reader once asked me why I write articles covering topics that otherwise remain silent. The answer is very simple … the stock market isn’t your friend. It is a vicious predator that will gobble up everything you leave on the table. If you turn away or blink for a minute it will grab what it can.

The average investor underperforms the market by substantial margins. Trusting what you hear (especially from TV pundits) is like walking into a Pawn Shop and trusting the Owner to give you the maximum your possession is worth.

If you are not getting the returns you think you should then you need to change what you’re doing. STOP believing what you see, hear or read. Do the research yourself. That includes doubting even what I say.

As those that have read my last two articles … and now this one, have found … there is a great chasm, a huge disconnect between reality and perception.

The Case Against High Stock-Market Volatility in 2016 (Guest Columnist at...

BinaryFest.com - April 20, 2017
0
About a month ago, when Steve Sears and Barron’s asked if I would be interested in writing the first The Striking Price of 2016 and share my...

A Couple of Forex Trading Secrets That Nobody Wants to Tell...

The Best Forex Gold Trading Hours Across The Globe

These Rules Will Make You Consistent Profits

7 Layers of the Osi Reference Model