I have received several requests recently from Seeking Alpha members to compare and contrast Enbridge Inc. (NYSE: ENB) and Energy Transfer Partners (NYSE: ETP). I compared both to Kinder Morgan (NYSE: KMI) and concluded each of them outshines Kinder Morgan by a wide margin. In the following sections, I will do my best to determine which of the two offers the better risk/reward proposition for conservative dividend growth and income investors. 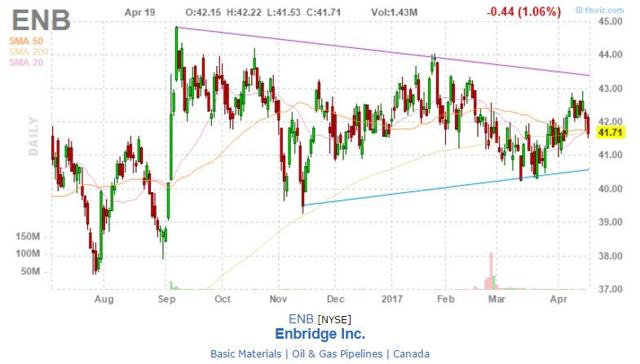 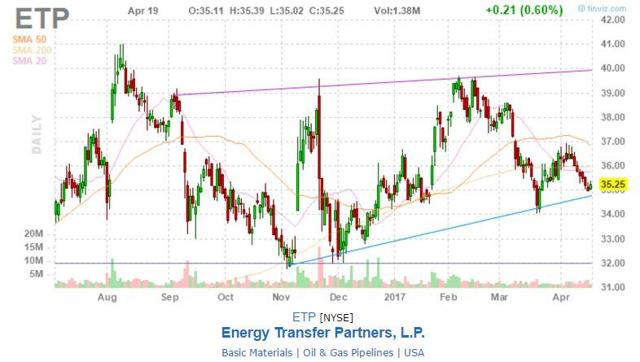 ETP has just wrapped up its fight over Dakota Access Pipeline (DAPL). A request by the Standing Rock Sioux tribe to issue an emergency injunction against the Dakota Access Pipeline was recently denied by U.S. District Judge James Boasberg. The judge stated such a move would be against the public interest. Moreover, the Dakota Access Pipeline will begin interstate crude oil delivery on May 14, according to a filing with the FERC. The DAPL will reduce the need to ship 150,000 barrels per day by rail. This will lower costs for everyone in the system, according to BTU Analytics’ Tony Scott. Scott cites companies heavily invested in the Bakken such as Hess (NYSE: HES) as beneficiaries. Furthermore, I see the merger with Sunoco Logistics Partners L.P. (NYSE: SXL) as a major positive as well. 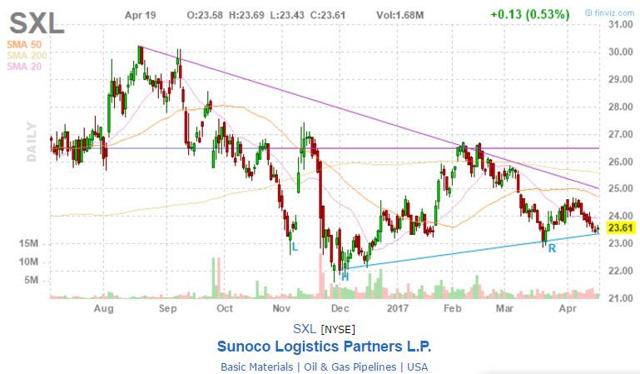 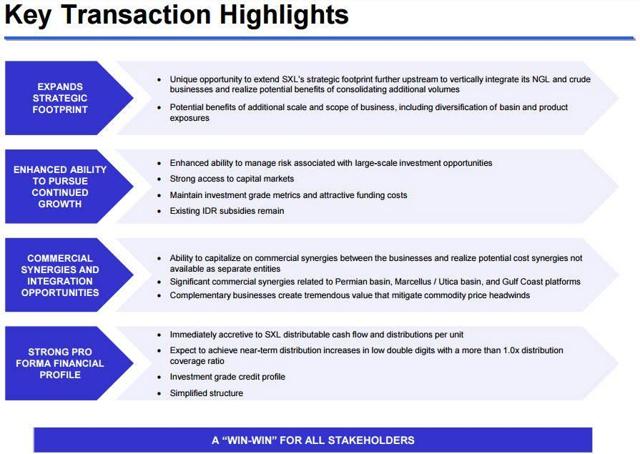 According to the company, the combination allows for more efficient capitalization of commercial synergies. Furthermore, significant cost reductions are on the table for the two companies. See strategic rationale slide below for full details. 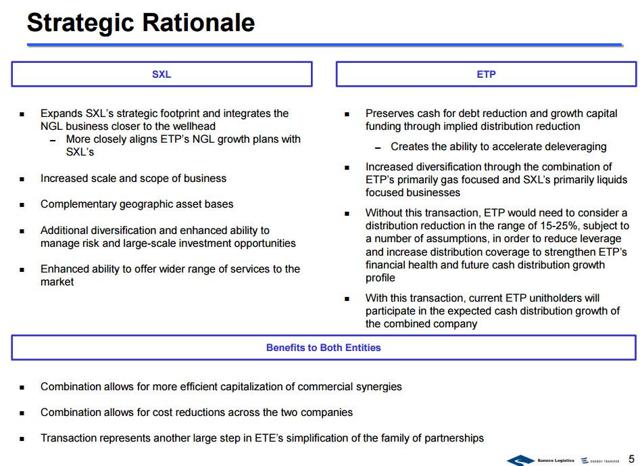 The combined company will have a strong foothold in the most prolific producing basins. This should augur organic growth for years to come. See below slide. 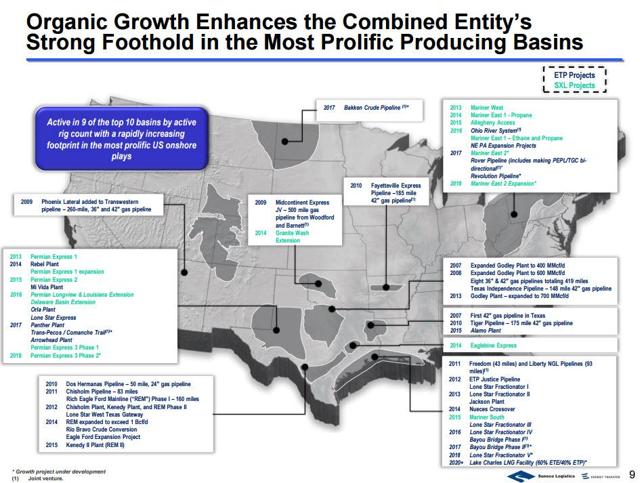 With the DAPL set to start in May and the merger with Sunoco Logistics Partners L.P. set, I see ETP’s future growth prospects as solid. This significantly lowers the risk to future distributions. Now, let’s turn our attention to Enbridge Inc.’s growth prospects. 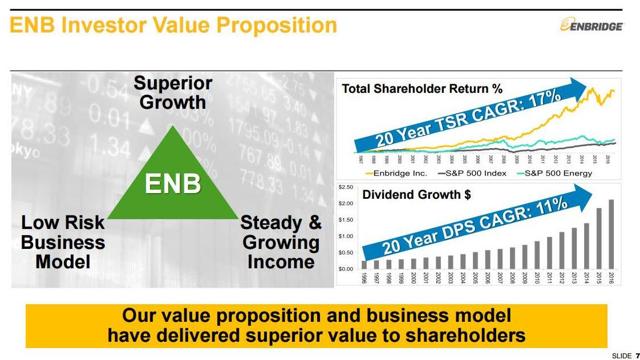 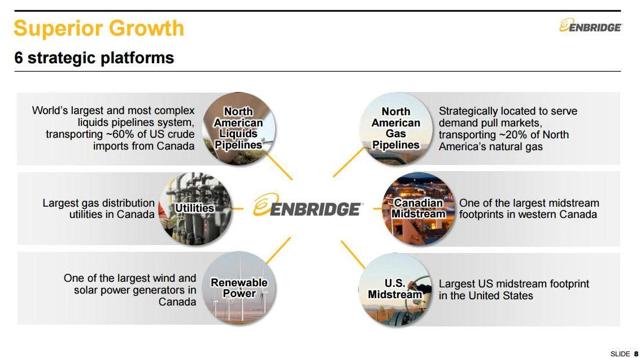 The company at present has over $20 billion of projects in progress through 2019. Moreover, the company has another $48 billion (CAD) of long-term projects in development as well. This puts the combined backlog at $55.8 billion USD. Please review the below slide comparing the growth prospects of the major pipeline companies. 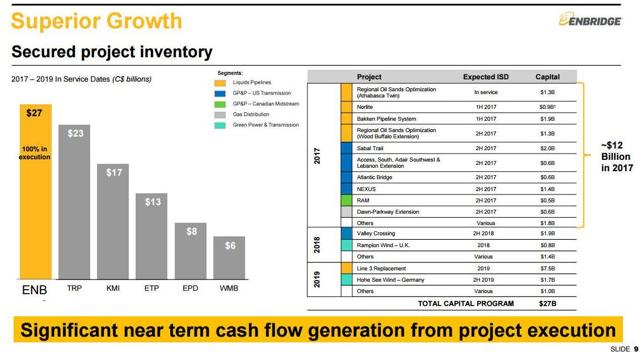 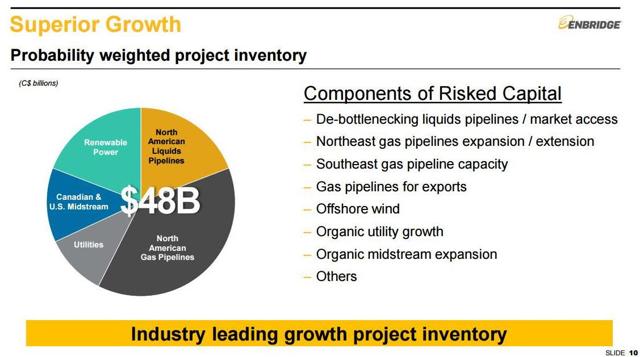 ENB has growth prospects as far as the eye can see. With $20 billion of projects in progress and a combined backlog of $55.8 billion, I’d say the risk to future distributions is extremely low. What’s more, I fully expect distributions to grow substantially by 2019 as more and more of these projects are placed into service. Let’s now turn our attention to the reward part of the equation.

Even if ETP cut the distribution by half, it would still be vastly greater than the distribution provided by ENB at present. Basically, we are talking about a $4.22 payout by ETP versus a $1.78 payout via ENB. ETP is the winner regarding reward.

Nonetheless, Enbridge is a dividend paying stalwart. The company is close to becoming a dividend aristocrat in fact. ENB has increased its dividend payout for the past 22 years with CAGR of approximately 11.2%. According to company guidance, Enbridge states it will continue to grow the dividend at a 10% to 12% CAGR through 2024. Let’s turn our attention to valuation.

ETP units are currently vastly cheaper than ENB’s shares at present. The standard metric for valuing MLPs is Unit Price divided by Distributable Cash Flow (P/DCF). Currently, ETP units are trading at a $35.17 and the DCF per unit stands at $4.22. This equals a P/DCF ratio of approximately 8.

On the other hand, you have ENB which is a C-corp. rather than an MLP. ENB provides a dividend rather than a distribution. The dividend is substantially less than the DCF per unit at $1.78 versus $2.27. Currently, ENB shares are trading at $41.65, and the DCF per unit stands at $2.27. This equates to a P/DCF ratio of approximately 18. So ETP takes the cake in regards to valuation.

Presently, I would say ETP represents a much better value to potential income investors while ENB may be a better choice for those looking for dividend growth. Furthermore, I posit the risk/reward ratio favors owning units in ETP rather the shares of ENB presently. ETP operates primarily in the U.S. while ENB’s operations are primarily in Canada. Even though the Canadian big wigs have approved the pipeline projects, there may still be significant environmental opposition to future projects. Kinder Morgan’s Canadian endeavor, the Trans Mountain Expansion Project, which will mostly be twined next to existing pipes and primarily built within the current right of way, is still facing 11 lawsuits.

If you are looking for current income and the potential for capital appreciation, ETP is the one for you without question. If you have a long-term time horizon and are looking for dividend growth, ENB may be the better choice. But for my money, I am choosing ETP. Like J.G. Wentworth says on TV, it’s my money and I want it now. I am buying ETP for the superior distribution, lower valuation, opportunity for capital appreciation, and the fact it operates mainly in the U.S. Those are my thoughts on the matter. I look forward to reading yours.

Your participation is required!

The true value of my article is derived from the prescient insights made in the comments section by Seeking Alpha members. Do you believe ENB or ETP presents a better value for dividend growth and income investors presently? If so why? Thank you in advance for your participation.

Final Note: If you found this article interesting, please click on the follow button below. I would greatly appreciate it.

Disclosure: I/we have no positions in any stocks mentioned, but may initiate a long position in ETP over the next 72 hours.

Utilities ETF Joins Energy ETF On The Podium – Change Is...

Another Buy the Dip for The Stock Market – Trend Following

How We Budget: New Parents Ryan and Kristina