Friday April 21: Five things the markets are talking about

The dollar has been on the back foot for most of this week on fading hopes that the new Trump Administration will not be able to push through fiscal stimulus any time soon.

After the Republicans’ failure to repeal the Affordable Care Act last month, investors have been paring their dollar “reflation” positions, believing that Trump will not be able to deliver on his election promises of tax cuts and infrastructure spend any time soon.

Not helping the dollar bulls is US data, it’s been perceived as being soft of late – in March, CPI posted its first monthly decline in seven-years, while non-farm payrolls (NFP) also fell short of expectations.

Market focus is firmly on this Sunday’s first round of the French election. It’s expected to be a two-horse race with Macron handily beating Le Pen in the run-off in a fortnight’s time.

1. Stocks get support from Mnuchin comments

In Japan, indices rallied to a two-week high overnight as investors bet that US tax reforms are finally gaining traction. US Treasury Secretary Mnuchin said the Trump Administration will “very soon” unveil a tax reform plan and expects Congress to approve it this year. The Nikkei 225 gained +1.0% – for the week, it gained +1.6%, posting its first weekly gain in six-weeks, while the broader gained +1.1%.

In Hong Kong, stocks edged lower in thin trading, as investors took to the sidelines ahead of the French presidential election on Sunday. Both the benchmark Hang Seng index and the China Enterprises Index lost -0.1%.

In China, stocks posted their worst week this year as tighter regulatory scrutiny and concerns over the broader economic outlook dampened investors’ risk appetite. The blue-chip CSI300 index rose +0.2%, while the Shanghai Composite Index was flat. For the week, the CSI300 was down -0.5%, while the SSEC lost -2.2%.

In Europe, equity indices are trading mixed, but generally lower, as market participants remain cautious after the recent terror attack in Paris. Banking stocks generally higher in the Eurostoxx, while commodity and mining stocks are supporting the FTSE 100.

2. Oil dips, on course for biggest weekly drop in a month

Oil prices are lower ahead of the US open and are on course for their biggest weekly drop in a month over doubts that an OPEC-led production cut will restore balance to an oversupplied market.

Despite the Saudi’s and Kuwait favoring extending their production limiting deal with non-OPEC member producers into H2, the Russian’s have declined to say whether they would adhere to an extension before a joint meeting on May 25.

Not helping with the supply issues is US data this week showing that their production numbers have jumped by almost +10% in the past 11-months.

Gold prices are steady (down -0.1% at +$1,280.01 per ounce) with safe-haven demand remaining intact as investors kept an eye on the French presidential vote that is seen as too close to call. 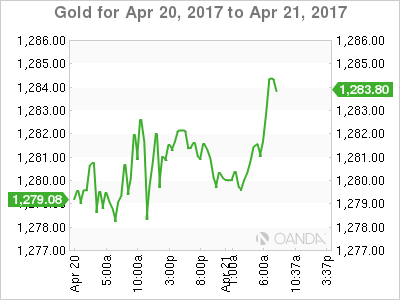 3. ECB to show a steady hand

The ECB meet next week (April 27) and the market expects President Draghi to be playing it safe after the first round of French presidential elections.

The ECB chief is expected to reiterate that the bank is serious about its forward guidance and that policy rates will only go up after the end of its QE program.

Heading into Sunday’s vote, the yield on 10-year French government debt has hit its weakest level in three-months and the gap between it and its German equivalent has fallen to its tightest in three-weeks.

The yield on US 10’s has slid -1 bps to +2.23% after a +3 bps advance Thursday. Most other eurozone bond yields are little changed on the day. 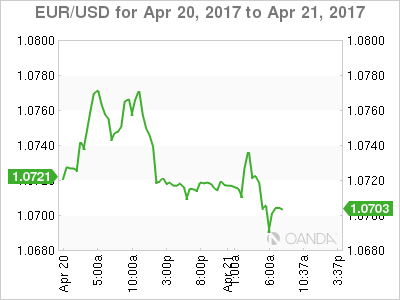 Investors appear to be unwilling to carry too much risk heading into Sunday’s Presidential election.

Currently, consensus expects a market-friendly outcome, which should support the EUR (€1.0706) and provide further opportunity to purchase USD/JPY (¥109.14).

Note: The options market continues to see a hefty demand for protection against a sharp EUR move after the vote.

A worst-case scenario for markets would be far-right candidate Le Pen and far-left candidate Melenchon making it to the May 7 vote, but a strong victory for Le Pen would also unsettle markets. Either scenario could see the EUR quickly drop to its 15-year lows atop of €1.0340’s. Alternatively, a solid victory for centrist candidate Emmanuel Macron could see it rise to €1.10-1.1200.

The pound (£1.2800) is under pressure from this morning’s weak retail sales print (see below). 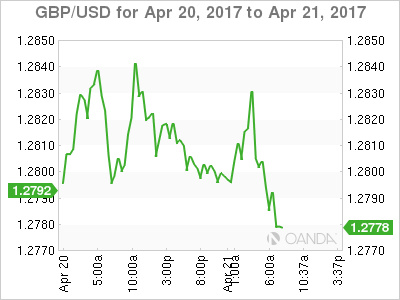 The UK’s all-important consumer made a negative contribution to the quarterly economic growth for the first time since late 2010 – Sales fell by -1.4% in Q1.

Note: This comes at an awkward time for PM Theresa May, who began divorce proceedings from the EU in March. 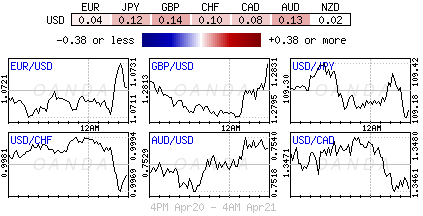 BinaryFest.com - November 4, 2017
0
Whenever making money from article writing is discussed, the first way that everyone thinks about is ghost writing.This means writing articles for other people...

How to Use Online Poker RNG Secrets

Survey Taking For Money? How to Earn Money From Paid Survey...