The iShares MSCI Brazil Capped ETF (NYSEARCA:EWZ) did very well in 2016. After its share price bottomed in early January, the significantly improved commodity prices helped to push it up by more than 100%. The Brazilian stock market experienced an impressive growth, despite the weak Brazilian economy and the continuing corruption scandal. But the good times seem to be over, and there is a high probability that the EWZ share price will start to decline again.

The 2016 bull run of Brazilian equities pushed its valuations quite high. The P/E ratio climbed up to the level of 18.8, which is in line with some of the developed markets, such as Germany (19.8), Japan (18.4), Australia (19.9), Canada (22.5) or the USA (22.7). In a normal situation, a P/E ratio of 18.8 isn’t too high. But given the state of the Brazilian economy and the ever-growing corruption scandal, a much lower number should be more appropriate.

The 10 biggest holdings create more than 50% of EWZ portfolio. The highest weight is attributed to preferred shares of Itau Unibanco (NYSE:ITUB) and Banco Bradesco (NYSE:BBD), which together make for more than 20% of the fund’s holdings. Shares of both banks are up by more than 100% since the beginning of 2016. The giant beverage producer, Ambev (NYSE:ABEV), creates 8.11% of EWZ, and the common and preferred shares of Petrobras (NYSE:PBR) have a combined weight of 9.56%. No other company has weight higher than 5%. 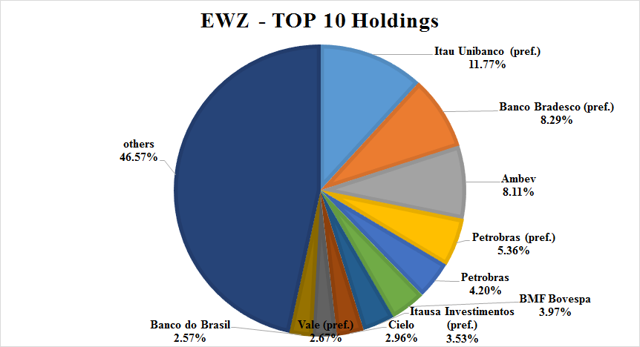 The financial sector makes for more than 38% of EWZ. The materials and energy sector is more than 21% of EWZ. The problem is that the financial sector can be quite sensitive to political risks and to the condition of the Brazilian economy, and the materials and energy sector is dependent on global commodity prices. Both of these factors can generate a negative pressure in the near term.

The commodities markets have started to weaken again. Copper price is 8.5% below its January highs, zinc price is almost 13% below its February highs and nickel price is 20% below its November highs, which means it entered a bear market. Also, iron ore entered a bear market, as its price declined by more than 21% since the middle of March. Rising commodity prices were probably the main factor that helped push EWZ up in 2016. If the current weakness continues, the commodity market will start to drag the fund back down. Moreover, the Brazilian macroeconomic fundamentals are still weak.

The Brazilian GDP keeps on declining. It declined by 0.9% in Q4 2016. News from yesterday shows that the Brazilian economy did quite well in February, pushing EWZ up by 4%. However, the optimism may turn out to be overdone. It was expected that the Brazilian economy could grow by 0.5% in 2017, but the recent developments may crush these hopes. Especially the widespread corruption scandal and the newest rotten meat scandal may weigh on the prospects of the economy.

Many countries (including China, Japan or the European Union) limited or completely banned imports of Brazilian meat after food inspectors discovered that some of the Brazilian producers exported rotten and salmonella-infected meat. In 2016, the country exported meat worth $12.6 billion, which equals to approximately 0.7% of its GDP. The volume of beef exports alone declined from $63 million to $74,000 per day. If the exports are limited for a prolonged period of time, the meat producers as well as some of the related industries may get into some serious trouble.

The seriousness of Brazilian economic woes is underlined also by a steep growth of the unemployment rate. It climbed to 13.2%, which is the highest level since early the 2000s. There are 13.55 million Brazilians unemployed right now, and the trend is clearly negative.

The high unemployment rate has a very negative impact on the government budget. Not only are the tax revenues lower, but the spending on social benefits is also higher. The Brazilian government is unable to keep the budget in balance. The relatively stable deficits of around 2-3% of GDP started to grow quickly in 2014. In 2015, the deficit climbed to 10.2% of GDP, and in 2016, it reached 8.9% of GDP. Although Brazilian president Michel Temer intends to cut spending and raise taxes in order to eliminate the deficits, his reforms have to face strong headwinds. As a result, the expected 2018 deficit has been increased notably, from $25 billion to $41 billion.

As the budget deficits grow, while the GDP shrinks, the government debt keeps on increasing quickly. The debt was only slightly more than 50% of GDP in 2013, but it attacked the 70% level in 2016. It means almost 20 percentage points growth in only 3 years. And this trend will continue also in 2017. If President Temer doesn’t manage to push the austerity measures through, the debt may get out of control pretty soon. The current level of government debt isn’t a disaster yet, given that most of the countries are much more indebted (Germany – 71%, USA – 104%, Japan – 250%, Italy – 133%, Canada – 92%, etc.).

However, Brazil has a very long history of sovereign defaults. The biggest South American country defaulted in 1826, 1898, 1914, 1931 and 1983. The average interval between two defaults is 39.25 years. The last one occurred in 1983, which means that the next one may occur around 2022. I know, this is only a very rough estimate based on historical data, but if the government debt keeps growing and investors remember that Brazil is still only a “Second World” country that defaulted 5 times over the past 200 years, they may get nervous, which may lead to a quick escalation of the problems.

The corruption scandal that was originally related to the Brazilian state-controlled oil giant Petrobras keeps growing step by step. At first, only Petrobras and some of its contractors were involved. Later, the investigators found that also some of the important politicians were involved. The situation resulted into the impeachment of President Dilma Rousseff and the installation of President Michel Temer. But as recent findings show, the whole affair is much more widespread. Based on the allegations of some of the executives of the construction company involved in the corruption scandal, Odebrecht, judge Edson Fachin has accused many Brazilian top politicians.

The list of people that are about to be investigated includes 108 names. Among the accused are also ministers of the current Brazilian government, approximately 1/3rd of them. This may turn out to be a huge problem for Temer, as it may cause further complications to his efforts to adopt austerity measures. Another problem is that the new presidential elections should take place in 2018, and the fresh list includes also some of the highly probable candidates, including Aecio Neves, who lost to Dilma Rousseff (48.55%:51.45%) in 2014. The top politicians from all of the major parties should be investigated, which may lead to some major revelations. It means the 2018 presidential elections may turn out to be pretty unpredictable, which may lead to further destabilization of the Brazilian economy and stock markets.

The Brazilian stock market has done very well since the beginning of 2016. Share price of the iShares MSCI Brazil Capped ETF has grown by more than 100%, and the risks seem to be outweighing the potential gains right now. The Brazilian economy is in a bad shape, and although predictions say the GDP should increase slightly this year, the recent developments may crush these hopes. Several ministers of Temer’s government will be investigated, which may complicate his efforts to adopt austerity measures. Moreover, the investigations will probably have a significant impact on the 2018 presidential elections too. Not to talk about the commodity markets, which have started to weaken in recent weeks. Especially, the steep decline of iron ore prices may hit Brazilian economy and stock markets relatively hard. Moreover, coffee, soybean, corn and wheat prices are also weak. The situation is quite complicated, and I see more downside than upside for the iShares MSCI Brazil Capped ETF in the short-to-mid term.

Video Gets More Money Than Anything – Period

Getting Ready to Welcome a Foreign Exchange Student Into Your Home

Is The Binary Compensation Plan Fair?