Japan’s manufacturing sector enjoyed one of the strongest improvements in business conditions seen over the past three years in April. The Nikkei Flash Japan Manufacturing PMI rose from 52.4 in March to 52.8 in April, its second-highest reading since March 2014.

The survey data indicate that the robust expansion of the manufacturing sector seen in the first quarter of the year has continued into the start of the second quarter.

Encouragingly, an export-led upturn in new business prompted firms to take on extra staff at one of the fastest rates seen over the past decade, which should feed through to an improved labour market and higher consumer spending.

Price pressures are also starting to build, as signalled by both the steepest increase in charges for manufactured goods for just over three years and a sharp rise in input costs.

April survey data showed a solid expansion in new export orders continued to act as a key driver for Japan’s manufacturing output growth. Improved overseas demand was reported for an eighth successive month, reflecting improving demand in major markets and a relatively weak yen. The latest increase in export sales was one of the strongest seen over the last three years.

However, the recent strengthening of the yen, up nearly 7% against the US dollar so far this year, may restrain foreign demand for Japanese manufactured goods, if the trend of currency appreciation persists.

The manufacturing upturn placed further pressure on operating capacity. Firms reported the greatest rise in backlogs of work in two-and-a-half years, contrasting with the excess capacity seen last year. To ease the increasing strain on capacity, Japanese manufacturers took on more workers at one of the fastest rates recorded over the last decade.

The strong rise in employment may raise expectations for a tighter labour market, which should feed through to higher consumer spending and increased wages. All of which should help fan inflationary pressures. 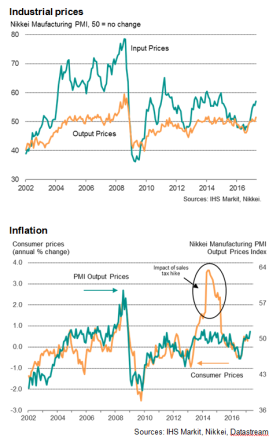 Manufacturing input costs meanwhile continued to rise at an elevated rate. Average input prices across the sector rose at the steepest pace seen in nearly two-and-a-half years, blamed in many cases on higher global prices for raw materials and greater energy costs.

At the same time, the data showed the sharpest rise in prices charged for Japanese goods since February 2014, diverging from the broadly stagnant price trend seen in the last few years. Historical comparisons suggest that the rise in output prices will lead to further increases in consumer prices, which would help inflation escape from its current low levels.

The news of an expanding manufacturing sector and rising prices will be welcomed by the Bank of Japan ahead of next week’s policy meeting.

Nikkei services PMI data will provide further insight into the health of the Japanese economy, published on 2nd May.

Roboadvising: What Investors Need to Know

Taking Control of Your Student Loans