Hard surface flooring and accessories retailer Floor & Decor (FND) has filed proposed terms for its IPO, aiming to sell 8.82 million shares at a midpoint price of $17 per share.

At a proposed post-IPO market cap of $1.57 billion on growing sales of over $1 billion, I view FDO as an attractive IPO candidate at the proposed share price.

My opinion on the IPO is a BUY.

Smyrna, Georgia-based Floor & Decor was founded in 2000 by Board Member George Vincent West, who served as CEO or Co-CEO from inception to 2012.

The company is now headed by CEO Thomas Taylor, who has been in the DIY retailing industry since 1983 when he began as an employee of Home Depot (NYSE:HD) at age 16.

Below is a brief video of a typical Floor & Decor store:

Floor & Decor intends to sell $150 million of its Class A common stock at a midpoint price of $17 per share, resulting in a proposed post-IPO market cap of $1.57 billion.

Management estimates that it will receive up to $154 million in net proceeds if the underwriters exercise their over-allotment options.

The company plans to use the proceeds to pay down debt, as follows:

We intend to use all of the net proceeds of this offering to repay a portion of the amounts outstanding under the Term Loan Facility, including accrued and unpaid interest. The proceeds of the Term Loan Facility were used to [i] repay our prior senior secured term loan facility with GCI Capital Markets LLC, dated as of May 1, 2013 (the “GCI Facility”), [ii] repay our prior term loan facility with Wells Fargo Bank, N.A., dated as of May 1, 2013, as amended (the “Prior Term Loan Facility”), [iii] pay the Special Dividend (as defined below), [iv] make certain option adjustment payments and [v] repay a portion of our prior asset-based revolving credit facility (the “Prior ABL Facility”). 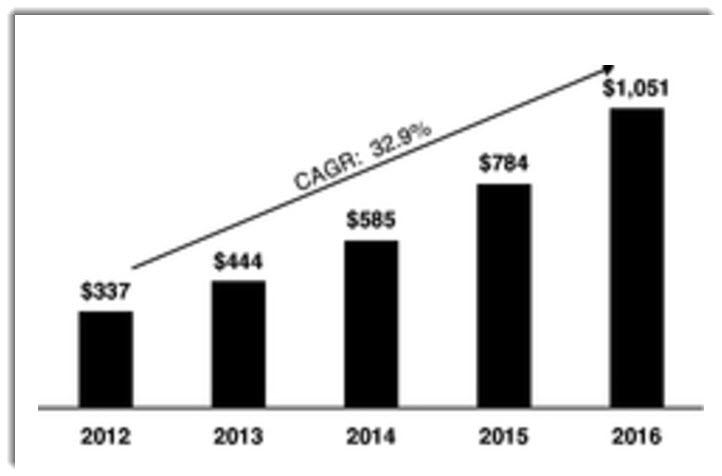 Management states that its preliminary estimates of unaudited sales for 1Q 2017 will be approximately $306 million, for an annualized revenue run rate of $1.2 billion, depending on seasonality and other unknown future factors.

This would represent a YoY 14% top line revenue growth rate in 2017 if achieved.

In that article, I highlighted FDO’s trend of generally consistent and positive financial results:

FDO’s management has stated that it sees the opportunity to aggressively expand its current 72-store footprint to 400 stores nationwide within the next 15 years while producing cash-on-cash returns of more than 50% per store by the third year after each store is opened.

As to valuation, by comparison Home Depot has a current Price/Sales multiple of 1.87x.

For its IPO, FDO proposes a valuation multiple of 1.5x, which compares favorably to the higher Home Depot valuation, yet FDO is the faster-growing company of the two.

In sum, I view FDO as an attractive IPO opportunity at $17 per share and believe the company has significant growth prospects ahead of it while retaining high gross margins and operational cash flow.

My opinion on the IPO is a BUY.

Black Friday Shopping – How to Make Thousand in One Day

BinaryFest.com - June 12, 2017
0
Black Friday is a goldmine for eBay sellers. On one single day there are more profitable items for sale than during...

How You Too Can Start Today In Making Money From Scrapbooking

All You Need to Know to Earn Money Fast

Four Facts to Help Address the Issue – Is the VIX...

Is Peter Schiff Full of It?

If You Want to Make Money in Forex Treat it As...

Easiest System Ever – Scam or Legit?

How Does Advertising on Craigslist Work?