Monday April 24: Five things the markets are talking about

The first round of the French Presidential election produced one of the most market-friendly outcomes with centrist Emmanuel Macron leading against the right wing Marine Le Pen.

This week, the BoJ and the ECB meet and neither is expected to change its monetary policy. The ECB will do little if anything given the easing of inflation last month along with the considerable risks of the French elections.

The BoJ’s Governor Kuroda has already indicated on the weekend that stimulus is here to stay for some time and given the yen’s (¥110.00) recent strength, they cannot afford to discuss changes.

Also, in Europe, Q1 growth data will be released in the UK and France, while Japan will release its slew of end-of-month numbers. In Australia, dealers get to pick apart the important quarterly CPI data.

The geopolitical focus again turns to the Korean peninsula with more saber rattling by the North.

Stateside, investors are also watching Washington this week, as Congress and White House standoff on funding for a southern border is expected to come to a head.

On Friday, US GDP is due and the economy is expected to expand at a +1.5% annualized rate in Q1 – the weakest pace in 12-months.

The selloff in Chinese equities deepened overnight as concern grows that authorities will step up measures to crack down on leveraged trading.

The Shanghai Composite dropped -1.4% to the lowest since Jan., after the index tumbled -2.3% last week.

In Japan, the broad based Topix increased another +1%, after last week’s first weekly advance in more than a month.

The “feel good” factor has volatility measures slumping – the gauge for the Eurostoxx plunged -29%, while the measure for the Nikkei 225 Stock Average lost -17%, the most in six-months.

In Europe, equity indices are trading sharply higher as risk-on prevails after Macron’s first round win and German sentiment data (see below). Banking stocks are supporting the Eurostoxx and French banks have pushed the CAC 40 to outperform. Energy, commodity and mining stocks are also trading higher and supporting the FTSE 100.

Following last week’s big losses, oil prices have recovered some lost ground overnight, driven by expectations that OPEC will extend a pledge to cut output to cover all of this year. However, a relentless rise in US drilling is expected to cap most market gains.

Oil prices fell steeply last week on the back of stubbornly high crude supplies, despite a pledge by OPEC to cut production by almost -1.8m bpd for six-months from Jan. 1.

Note: On the weekend, a panel made up of OPEC and other producers has recommended an extension of output cuts by another six-months from June.

Capping market gains are being capped by US drillers who added more rigs’ for a 14th consecutive week last week, to 688 rigs. 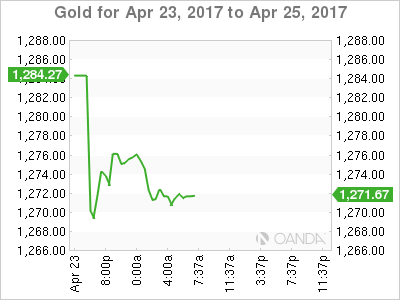 A percentage of the risk premium that has been priced into the fixed income market this year has been taken off ahead of the US open as Macron won the first round voting in the French presidential election and solidified his prospects of becoming the country’s next leader.

German benchmark yields rose +9 bps and those in the UK added +6 bps, while the yield on French 10-year notes dropped -11 bps to yield +0.83%, the lowest level since mid-Jan.

The spread between 10-year French OAT’s and German bunds narrowed -20 bps to +49 bps. 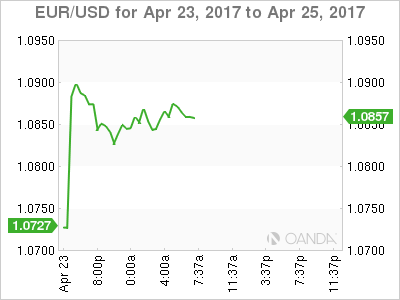 With the French election first hurdle cleared, risks to the EUR (€1.0867) might move to the upside. The “bulls” believe that EUR needs to overcome last night’s high area (€1.0933) to improve the medium term outlook, otherwise the pair will likely be stuck in a range until the round two results are known.

US fiscal policy is also expected to limit the EUR’s upside in the short-term, so don’t be surprised many to fall into a ‘buy-the-dip’ strategy with the potential to rise towards €1.12 or €1.13 into June assuming a Macron French Presidential win.

Elsewhere, USD/JPY has also benefited from the risk-on environment to hold above the ¥110.00 level ahead of the US open. 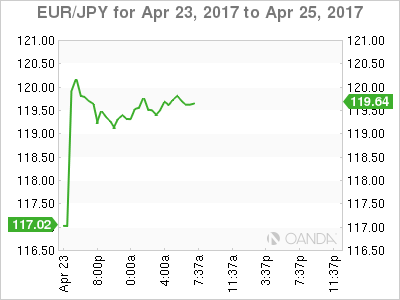 Data this morning shows that German business sentiment has picked up further in April, beating forecasts in a sign that Europe’s largest economy “is growing strongly.

The Ifo business climate index rose to 112.9 points from 112.4 points in Mar. – the highest level in six-years.

Digging deeper, the monthly survey showed that businesses were upbeat about their current situation, but slightly trimmed their six-month outlook. The mood among German construction companies has hit a record-high. 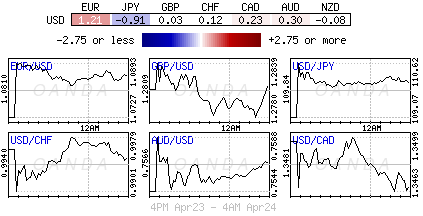 Free Money Thursday – ECB Votes to Keep Giving it Away

Why a Candy Bar is a Piece of Heaven That Can...

New Secrets For Making Your Penis Bigger and Thicker – Get...