HDFC Bank (NYSE:HDB), which is India’s second largest private sector bank, has been in my coverage radar since August 20, 2013. When I initiated coverage, the stock was trading at $30.1 and it was not long before the stock started trending higher.

My second “Buy Coverage” on the stock was on September 17, 2014, with HDFC Bank having moved higher by 60% from initiation to $48.0. While the first thesis focused on why macroeconomic headwinds present a good buying opportunity, the subsequent coverage talked about rate cut upside trigger and comparison with ICICI Bank (NYSE:IBN), which is India’s largest private sector bank.

As I write for the third time, HDFC Bank is 58% higher from my last coverage and the stock not only trades at 52-week highs, but at an all-time high. However, my bullish view on the stock remains firm and I suggest HDFC Bank as a “Strong Buy” even at current levels with a 24-36 month investment horizon.

This thesis will elaborate on the macroeconomic and company’s specific factors that will trigger sustained upside for HDFC Bank. The timing of this thesis is interesting considering the point that the demonetization event in India and the push towards cashless economy is likely to have a positive impact on the banking sector.

Just To Put Things Into Perspective

Indian markets are at an all-time high and HDFC Bank has also been surging higher. However, considering a 2-3 year time horizon, the focus is on impending growth for the sector and bank.

While I will discuss factors that give HDFC Bank an edge over peers, the chart below is enough to explain why the banking sector in India will continue to grow not just in the next few years, but in the next decade.

The basic savings account coverage is dismal in several Indian states, and with an average penetration of 46%, there is immense potential just in one sub-segment of the banking sector.

The second chart below shows India’s household debt to GDP as compared with China and the United States. 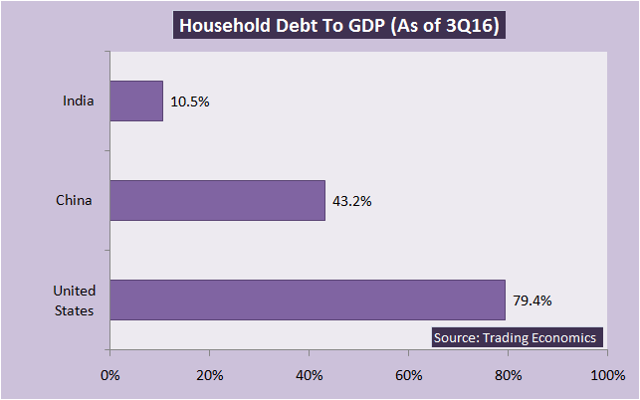 These two charts present some data on why the banking sector has immense potential. However, these two charts are very relevant to HDFC Bank because of the following reasons –

ICICI Bank is India’s largest private sector bank with HDFC Bank being the second largest. However, on several parameters, HDFC Bank is ahead of ICICI Bank and that makes me relatively bullish on HDFC. This section will discuss these parameters and its impact on the bank’s performance.

As the table below shows, HDFC Bank has an edge over ICICI Bank on fundamental parameters. 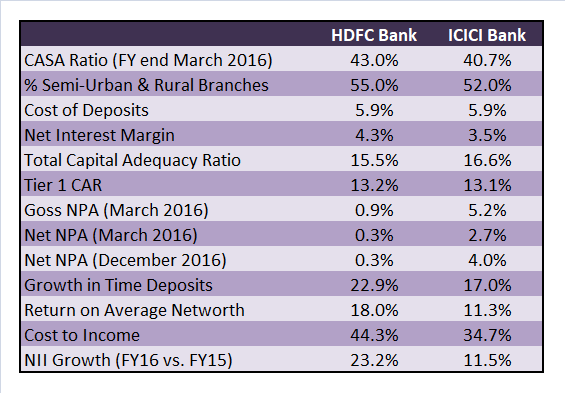 It is also worth noting here that net interest income growth for HDFC Bank was 23.2% in FY16 as compared to FY15. However, for ICICI Bank, NII growth was 11.5%. In fact, for the nine months ended December 2017 (FY17), ICICI Bank has seen NII shrink while HDFC Bank remains relatively robust on that front. It is clear that increasing NPAs are a concern for ICICI Bank and have impacted the bank’s credit offtake.

While the difference is not very significant, HDFC Bank does have a higher number of branches in semi-urban and rural areas. This is another factor that gives HDFC some edge over ICICI Bank. In the next decade, retail deposit growth will be significant from semi-urban and rural India. HDFC Bank seems well positioned to capitalize on this opportunity and maintain a CASA that is higher as compared to ICICI Bank.

Besides talking about the point that HDFC Bank seems to be a relatively better investment than ICICI Bank, I also wanted to discuss the key fundamental factors to throw some light on the valuation gap that exists between the two banks.

Further, looking at another fast growing bank in India, it will be clear that HDFC Bank is not trading at expensive levels. Kotak Mahindra Bank currently has 1,348 branches in India as compared to 4,520 for HDFC Bank. As of March 2016, Kotak Bank had CASA ratio of 38.1% with HDFC Bank having CASA of 43% for the same period. The net NPA for both banks is also comparable and below 1.0% as compared to ICICI Bank having much higher levels of net NPA.

Just as an example, HDFC Bank has started levying a minimum charge of INR150 per transaction for cash deposits and withdrawals beyond four free transactions in a month. These charges to curb cash transaction will translate into increase in non-funded revenue.

An increase in use of debit and credit cards will also help boost non-funded revenue on account of transaction fee levied by the banks. I must mention here that HDFC Bank has a strong credit card user base and the bank is also a leading provider of payment gateway services.

The Indian economy is likely to grow at well over 5% in the coming decade and these are strong growth projections relative to other economies. As the economy does well, the banking sector is likely to benefit and HDFC Bank is well positioned to capitalize on the impending opportunities in the sector.

As discussed in the thesis, HDFC Bank does have a strong funding base, and with a better asset quality as compared to the closest peer, HDFC Bank is positioned to grow at a robust pace.

Even with the stock trading near all-time highs, I believe that fresh exposure can be considered and valuations are not stretched. I reiterate a “Strong Buy” rating for the bank with a time horizon of 24-36 months.

BinaryFest.com - June 19, 2018
0
The internet is a great place to make extra cash quickly while providing goods and services that benefit your customers. There...

Forex Macro Scam – How to Check if a Forex System...

"I Can Only Wear Gold Jewelry" – The Truth About Jewelry...