Just a few weeks ago I wrote an article outlining the possibility Snap (SNAP) would rocket out of the IPO gate and thus recommended buying at the open only to sell at the top two months later. I compared other tech IPOs and their trajectories to calculate the time and run up to the peak of IPO hype. It turns out, however, Snap hasn’t cooperated with this trend. Instead Snap has been a pretty lame disappointment and, regardless of what anyone else has said, the movements of the stock have been weak at best for typical IPO mania.

As I shared in the prior article, the companies studied showed heavy, sustained movements upward only to reverse course and drop helplessly and painfully. I contended Snap would take this path and the game plan was to buy at the IPO and to dump it about 63 days later when it had exhausted the exuberance.

And I wasn’t just talking the talk – I did in fact put my money where my mouth was and bought a small lot on March 2nd.

However, as the first half of the ‘long’ period wore on I realized Snap was not acting according to plan.

What I was expecting was something more like this: 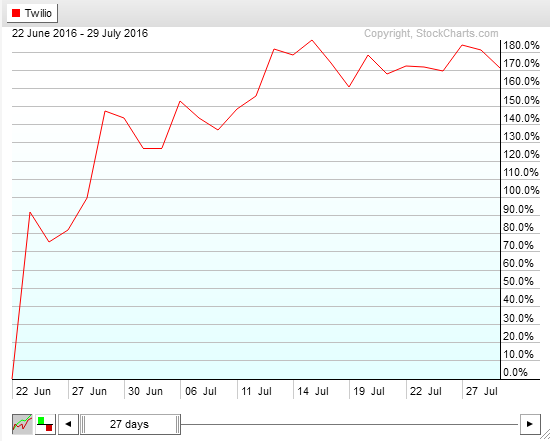 It doesn’t take a college degree to see the difference.

So, I sold my entire position for a very small loss (~7%). My intentions were not to be some kind of bag holder or Snap long-term investor but instead use the IPO hype to ride a quick profit. However, when I saw the road Snap was taking I realized this isn’t going to end well if I remain in the game for the rest of the study’s duration.

So what gives? Why did Snap not go along for the IPO roller coaster ride?

There are a few theories but the two sticking out to me are:

What I find interesting is Snap is indeed acting more like Facebook than it is any of the other tech IPOs I studied. However, I did leave room for a Facebook-like scenario in my risks profile for the strategy.

Snap could wind up being a Facebook and stumble out of the gate and drop to half its IPO price before gaining the confidence of Wall St. and exploding, but only after 434 days as a public company.

But I contended there were some differences and the possibility of this outcome was plausible but not probable:

Facebook had the infamous NASDAQ IPO debacle and was also pioneering the way for how social media apps and sites make money. As we all know, Facebook has figured it out as its stock has appreciated over 250% since its debut along with impressively sustained revenue growth. Therefore, it’s not a surprise Snap has garnered over 500% in revenue growth at this stage. The trail has been paved already and advertisers have long been aboard the social media train.

But it seems the trail has not been paved for Snap as Wall St. and advertisers are telling Snap it has to carve its own way through the woods. Just because Facebook paved a way for mobile social media advertising doesn’t mean Snap gets a free pass into the world of money thrown at it – at least it’s how it seems. Sure, Snap has seen a several hundred percent increase in revenue year-over-year ($404.5M from $58.7M) but the dollar amount pales in comparison to Facebook’s early days of $5.1B. Of course, Snap is much smaller in regards to users than Facebook was at IPO: 158M daily active users versus 618M, respectively – nearly a quarter of the users but less than a twelfth of the revenue.

In other words Snap has 25% of the users Facebook did when it IPO’d but only 8% of the revenue. Expressed another way each user was bringing in $8.25 for Facebook but only $2.56 for Snap in terms of revenue.

But the comparison doesn’t make sense unless we factor in some type of stock valuation. At Snap’s current stock price of around $21 it has a market cap of $24.3B. This compares to Facebook’s market cap of $60B at the same point after IPO! Over two fifths of the market cap but only a quarter of the users and a twelfth of the revenue. And as we now know, Facebook is the leader in social media – bull or bear there is no denying the returns Facebook has delivered shareholders. You don’t go from $18 a share to $144 a share because of hype, just like Snap can’t go from $17 a share to anywhere above $29 a share on hype – as we have seen.

Did I forget to mention the profitability factor at the time of IPO? Consider it your homework.

Snap has a lot to prove if it wants its share price to head anywhere north of where it is. But, there is the possibility Snap takes the Facebook execution and market treatment route to a higher share price and more inline valuation. If Snap can deliver exceptional results then it may find its way to rewarding shareholders beyond a small IPO pop.

“Now Joe, you sound a little hypocritical – you buy in and say it’ll go up but then sell out only to turn around and bash the company and stock.”

Let me remind you I wasn’t bullish on Snap, necessarily. I was targeting the expectation of exuberance sending the stock to unfathomable valuation levels and I was ready to capitalize on it. That’s all. Now I’ve seen neither Wall St. nor retail investors impressed or able to move the stock. This tells me there is a deeper situation and valuation is truly a concern.

The valuation difference is stark when the goal is to usurp the leader in the space, a leader mimicking its every move in order to strangle the grip on users and subsequently revenue. It’s a hard battle to fight when the valuation says you’re on a flight plan to surpass the leader today without the numbers to back it up.

I wouldn’t touch Snap again until real metrics and financials are worthy of real ‘coup power’.

If you’d like to be made aware of my opinion and analysis in the future on Snap as well as other social media and tech companies, then I encourage you to follow me by clicking the “Follow” link at the top of this page next to my name.

Disclosure: I am/we are long FB.

Nvidia (NVDA) Is on the Verge of a Big Breakout

Gann – A Track Record That Made Millions Find Out How!

Using Excel And VBA to Create Your Own Lotto Numbers