The way to make money in the stock market is to jump on underappreciated stories before they become appreciated by the mass of market participants. In the gold mining sector money is usually made when expectations are low and a company either surprises with a new discovery (in the case of exploration) or better than expected production and profit margins (for producers).

Most analysts agree that mid-tier producers with growing production profiles are a sweet spot in the gold mining sector and we have recently witnessed a tendency for mid-tiers to outperform senior producers, even during bear market periods for the sector.

The multi-year bear market which the gold mining sector experienced between 2011 and 2016 caused senior producers to reshape their strategy; instead of having numerous 50,000-250,000 ounce per year projects the largest gold mining companies have decided to simplify and opted to have fewer, larger projects. This new strategy has opened up opportunities for investors who are able to acquire projects that have suddenly become ‘non-core’ for some of the world’s major gold producers.

As senior gold producers do their best to focus their production profiles and become leaner they have begun to divest assets which don’t turn the needle much for them. A recent example of this comes from Goldcorp’s sale of the Los Filos Mine in Mexico to newly created Leagold Mining (OTC:HTXFF) (TSX-V:LMC); Los Filos produced 231,000 ounces of gold in 2016 at an all-in sustaining cost of $878/ounce Au and it is scheduled to produce an additional 1.256 million ounces over the remaining 8 year mine life.

Leagold paid US$350 million for Los Filos in what is a 3-pronged investment by LMC: 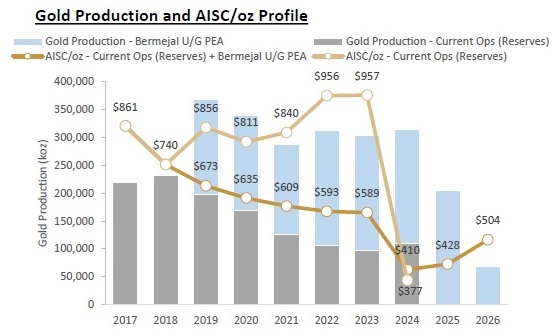 Leagold’s focus on acquisitions, optimizations and advancing its pipeline mimics the strategy of Endeavour Mining, a West Africa focused mid-tier gold producer built by Leagold CEO Neil Woodyer. Woodyer was awarded CEO of the Year by Mining Journal in 2016 for his efforts building Endeavour. In a recent interview with Kitco.com, Woodyer said Leagold has better opportunities in Latin America, and is starting with a much more significant asset base at Los Filos than Endeavour had. 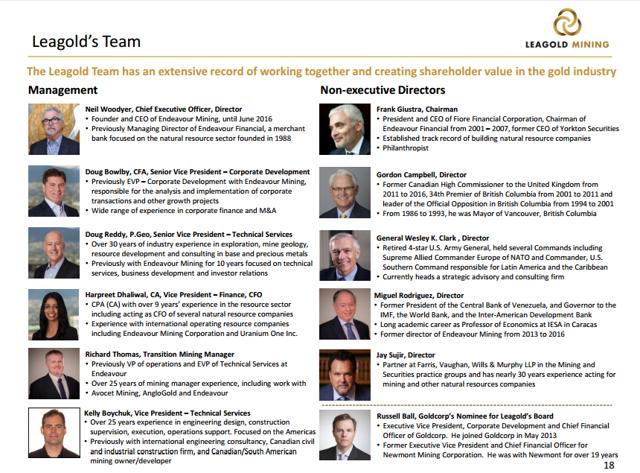 While most gold miners delivered shareholders huge losses during the brutal bear market years of 2013, 2014, and 2015 in the gold mining sector, EDV shares managed to hold up very well and then proceeded to rally more than 300% from late-2015 through the summer of 2016 as the gold price rebounded roughly 25%: 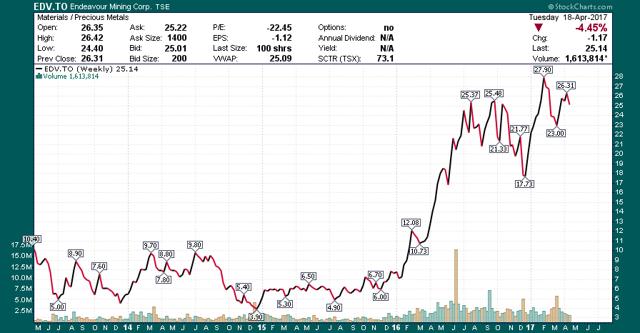 This is the kind of performance that gold mining investors are looking for when they invest their hard earned dollars in the sector as opposed to buying physical gold. The stunning performance in EDV shares was the product of shrewd cost containment, additional new discoveries, and accretive M&A activity which transformed EDV from the junior producer it was in 2010 to the powerful mid-tier producer it is now.

Leagold CEO Neil Woodyer was at the helm of Endeavour during its transformative years and left the company in June 2016 after EDV shares had risen ~450% from their 2014 low. Now he is committed to turning Leagold into not only the next Endeavour, but an even larger Latin American gold producer.

After its shares only recently began trading again (last week), following a three month halt in order to consummate the Los Filos acquisition, Leagold remains an off the radar story. It is situations like this which offer investors an opportunity to take advantage of a potential upward revaluation as the story becomes more widely followed and the current undervaluation is appreciated. After the recent financing to close the Los Filos Mine acquisition Leagold has a market cap of roughly C$425 million which, judging by its peers, does not give the company full credit for planned production at Los Filos:

Using what I view as conservative assumptions ($1250/oz Au and a stable $800 AISC) and not even factoring in a rising gold price environment generates a net present value (NYSE:NPV) of nearly US$500 million for planned production at Los Filos (NPV5% was US$334M using a $1200/oz Au price):

US$496 million translates to ~C$660 million at a $1.33 USD/CAD exchange rate which means that LMC shares could have 50% upside from current levels just to reach fair value for the existing production schedule at Los Filos. 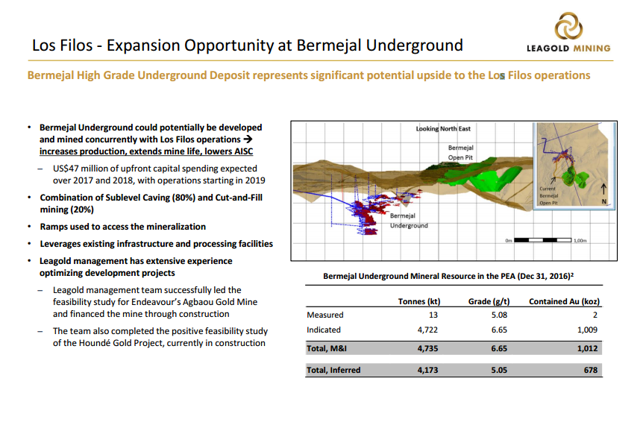 But the best part is that there’s more. Bermejal Underground is where the real juice is for Leagold. A second deposit was identified near the Bermejal open pit mine with a Measured and Indicated resource of more than 1,000,000 ounces Au grading 6.65 grams/tonne plus Inferred resource of 678,000 ounces grading 5.05 grams/tonne.

Given that Leagold expects it will cost them less than US$50 million to bring BU into production in 2019 and there is ample opportunity for exploration success at Bermejal, there is a lot of upside available to Leagold at BU. A rising gold price would be the icing on the cake for LMC shareholders who stand to win in three different ways:

Investing alongside an experienced management team with a proven track record of building a successful mid-tier gold producer (Endeavour Mining) and one of the most successful mining investors of the last couple of decades, Frank Giustra. Buying an undervalued asset with a team that is committed to cost containment and production optimization. As Leagold performs and gets its story out to a wider audience I see significant potential for an upward revaluation closer to peers such as Torex Gold; Analyst visits scheduled for May and new research analyst coverage will help Leagold access a wider audience of investors. Exploration success and additional accretive acquisitions. Leagold is committed to becoming a major gold producer and the plan is to accomplish that largely through acquisitions.

Do your own due diligence. As always it’s your money and your responsibility.

Disclosure: I/we have no positions in any stocks mentioned, but may initiate a long position in LMC.V over the next 72 hours.

How To Avoid The Big Mistakes Executing An Options Order

Why Day Trading is Not a Risky Investment?

XIV: The Scapegoat of The Market’s Decline

Online Money – How To Make Money Online For Beginners

Techniques of Building Your Online Presence

Choosing an Options Trading Broker – It's Not Just About Commission...