This article was featured by a famous American journalist Louis Brill in May 2003 “Signs of the Times” magazine. We reprint it here without any changes.

LED video signage has been extremely visible in Times Square, Las Vegas and on various stadium scoreboards and roadside billboards throughout the United States. In a unique example of form vs. function, a new shopping mall has transformed a group of LED video displays into a viewing circle of world culture.

The mall created a curved “LEDhenge” as a metaphor to reflect humanity’s interpretation of time.

In the Grand Court public space, Daktronics’ custom-designed LED video screens make the Mall at Millenia a 21st-Century shopping center. The video screens highlight a dramatic part of the Grand Court’s theme — how humans acknowledge time by denoting nature (the seasons) and culture (calendars). To enhance this theme, the mall created a futuristic “Stonehenge” (or “LEDhenge”) from 12 specially designed LED videoscreens representing the 12 months.

Jim Ryan, principal and president of JPRA Architects, discussed how electronic signage was integrated into the mall’s architectural design to engage shoppers. “In a simple, less-competitive time,” Ryan said, “the courtyard signage would have been a collection of typical banners, fixed sculptures or classical artwork. Given the shopping center’s name as the Mall at Millenia, we were looking for some sign concepts that would act as a bridge between the mall’s daily presence and a connection to the current times.

“To match the mall’s identity as a high-end fashion center, signs convey a high-tech look and, simultaneously, link shoppers with the worlds of haute couture and pret-a-porter, or ready to wear. To meet this challenge,” Ryan said, “we needed a communication system that was constantly informative, educational, culturally driven and also tapped into the fashion world.” Video filled the bill. 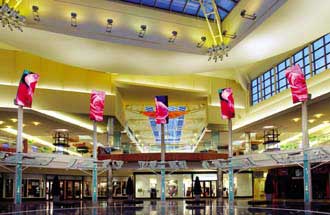 The LEDs’ uplifted screens and their curved effect created a window into space. Viewers feel as though they’re looking up into another dimension of the Grand Court.

“Once we decided that, it became a matter of selecting the proper video system to fit into the mall’s Grand Court courtyard. To emphasize LEDhenge’s display effectiveness, each LED screen curves inwards as if it were a dome’s gore segment, similar to the effects of a segmented IMAX movie dome”.

The Grand Court video-display system offers dramatic, multiple presentation opportunities from a single image, simultaneously transmitted across the 12 screens to several groups of images that “play” back and forth between the different screens. The main viewing feature of the Grand Court and the mall, the LED video screens integrate signage that combines advertising, public announcements and mall promotions.

JPRA Architect, Senior Associate and Designer Greg Tysowski observed that many design factors impinged on the final LED selection. “In considering what type of video display to use, all the various existing video display formats were reviewed, including large-format cathode ray tubes [CRTs], video-projection, LEDs and plasma-screen technologies.

“Our biggest concern regarding the video display,” Tysowski explained, “was ambient daylight coming in from the massive overhead skylights. The viewing system had to work during the day [the most difficult lighting conditions] and at night [evening skies make for easier viewing]. We finally selected LED video displays because of their dominant brightness in daylight, as well as their other added features of full color and high resolution.” The LED screens’ curved shape gave them more of a sculptural presence and fit within the overall courtyard circular of the Grand Court.

“Essentially, the Mall at Millenia wanted a video display that was also a piece of art, and we were able to do that.” said Mike Myers, Daktronics’ project manager. “With the uplifted screens and their curved effect, the mall’s LED screens act as a window into space. People view the screens as if they were looking up into another dimension of the Grand Court.” 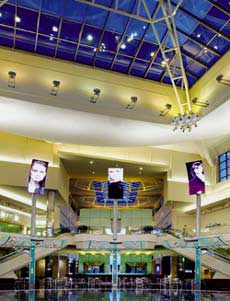 The mall’s identity as a high-end fashion center required a modern, high-tech, sign concept that links shoppers to the fashion world and the mall.

To do so, the communication system had to be constantly informative, educational and culturally driven.

The 12 identical LED screens were manufactured by Daktronics, under its ProStar VideoPlus product line. Each screen is a high-resolution, full-color display shaped somewhat like a curved playing card, with an aspect ratio of 10 x 4 ft., a viewing angle of 140° and programmable brightness to ensure uniform illumination in varied ambient-lighting conditions. To coordinate management of the Millenia video content, a Daktronics Venus 7000 Control System and a V-Link processor, (which converts video signals into digital images) and the Daktronics Vplay video server, integrate incoming video signals into the final display format.

Creation and production of the audiovisual content is coordinated by Moorestown, NJ-based Panzano & Partners, a 30-year-old advertising and marketing agency. The uploading and content management has been assigned to Keyframe (Clearwater, FL), a division of Daktronics Company president Mike Panzano noted that the system’s content creation was rooted in the developer and architect’s original vision for the property as “a multi-sensory experience for the Millenia shopper through the development of content intended to inform, educate and entertain.”

Offering a collection of upscale fashion and accessory retail stores, the mall required a broad array of visual content. Panzano & Partners’ association with Getty Worldwide Images and the Video Fashion Network provided consumers with that visual entertainment and the latest fashion information from the runways of Paris, Milan and New York City.

The essence of the Mall at Millenia’s display system vaguely reflects Las Vegas’ Fremont Street Experience (see ST, January 1996, page 132). That system, although incandescent-based, also presents a sign-display system as epic outdoor entertainment for casino guests and shoppers. Although the viewing content differs, the effect is the same, using large-format signage as an entertainment and advertising system in large, outdoor public space. 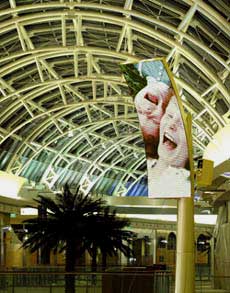 Manufactured by Daktronics Inc. (Brookings, SD), ProStar VideoPlus LED screens were used as display screens for Grand Court at the Mall of Millenia.

Each screen is a high-resolution, full-color display in a 10 x 4-ft. “playing card” aspect ratio. Behind the screen, the arcade portal connects the mall to the Grand Court area.

Daktronics’ Myers sees similar continuing opportunities and collaborations between architecture and programmable LED video displays to enhance public space. He noted how LED signage can become a critical design element within architectural design “by giving that space a sense of identity for the people who use that space.” One example he cited was the Lehman Brothers’ LED viewing wall located in Times Square (at the corner of 7th Ave. and 48th St.). 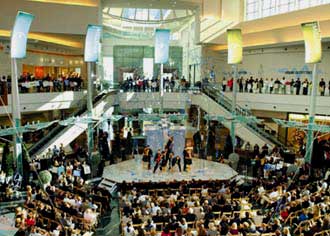 In the background, five of the LED viewing displays hover over the audience.

Ryan (JPRA Architects) noted an overwhelmingly positive reaction to the LEDhenge. “In many instances, shoppers hung out in the Grand Court to watch the LED screens, but often they would return for a second visit to see if anything new had appeared since their first viewing.” LED henge at the Mall at Millenia clearly shows that a creative use of signage is appreciated by the viewing public who can respond to the medium as well as its messages.

BinaryFest.com - February 3, 2018
0
Have you been thinking of the best ways to make money online and earn some extra cash for yourself during your free time and...

Where You Can Go For Work at Home Ideas

Analysis: Dozens of Brokers to Move Offshore Due to ESMA Leverage...