Top-down, regime-based multi-asset class strategies should incorporate financial stability risks. There has been an astounding regularity of boom-bust cycles in financial and real assets since markets were liberalized and deregulated beginning in the mid-1980s. In our view, ultimately these cycles culminated in the crisis of 2007-2009, generating significant losses for unsuspecting investors. In fact, the claim that this crisis represented some type of “black swan” suggests that there was little that could have been done to avoid these losses. On this point, we respectfully disagree; we think it is “better not to lose in the first place.”

For several decades after the Second World War, the growth in credit paralleled GDP growth; during this “Golden Age,” credit was provided by banks to foster capital formation and production of goods and services. However, with the onset of liberalization in the mid-1980s, credit growth decoupled from growth in underlying real economic activity (see chart below). In this more recent period, very little credit has been directed toward capital formation – mostly, it has been used to support purchases of assets, mostly real estate.

The mainstream macroeconomic view remains that commercial banks are simply intermediaries that lend out deposits that savers place with them. The ability to lend is constrained by the availability of these savings. However, reality is quite different, as the Bank of England describes here in the words of the BOE, “Commercial banks create money, in the form of bank deposits, by making new loans.” Importantly, loans create deposits (and deposits are money). However, this credit (and thus, via deposits, money) “can be allocated with the simple push of a keystroke.” Therefore, money is not constrained by the central bank (via reserves) or by the amount of existing savings. Instead, money is created ex nihilo (“out of nothing”) by commercial banks.

In addition, banks have tremendous latitude to determine how to allocate this credit and thus money with significant consequences for economic growth. What about the rest of the financial sector, including the shadow banks? They create credit, yes, but they do not have the authority to create deposits (and thus, money), ex nihilo, an important distinction. They remain closely connected with banks, and many of them are, in fact, affiliates of banks. In any case, the vast majority of credit (more than 80%) in the years leading up to 2008 was directed toward finance and real estate, and not to productive activity.

Creation of credit to finance purchases of real estate, equities, bonds, etc. generate much more modest rates of economic growth, given that finance is a zero-sum game. Although these debts build-up over time, paradoxically in the early phase of the cycle they are not viewed as a problem, given that asset prices, credit and net worth are also increasing (at times, even more rapidly). In fact, this is how the financial cycle works in a liberalized environment.

Claudio Borio at the Bank for International Settlements, one of the foremost thinkers about these issues, states: “….the system looks strongest precisely when it is most vulnerable….What looks like low risk is, in fact, a sign of aggressive risk-taking.” Borio refers to this as the paradox of financial stability here.

A stylized depiction of a financial boom is provided in the figure below. Positive feedbacks occur between credit growth, asset prices, balance sheets, outlook and net worth. In reality, all of these factors affect one another. Eventually this may evolve into a bubble. 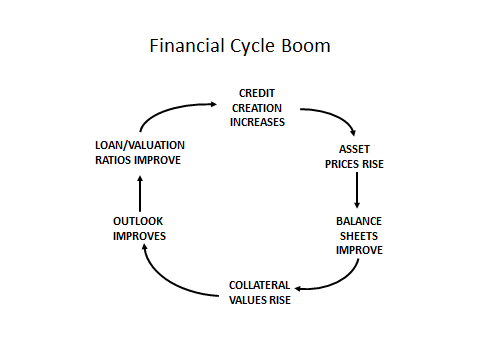 This pattern can persist for quite some time. In the words of Keynes, “financial markets can remain irrational for far longer than any of us can remain solvent.” Perhaps he should have added, “but not forever.” We know that trees do not grow to the sky. When conditions inevitably reverse (see diagram below), perhaps because credit growth slows, interest rates rise, risk aversion increases, firms and individuals start to delever, etc., conditions can unwind quickly. The statement “escalator up, elevator down” is one description of this process. Or in the immortal words of Warren Buffett, “when the tide goes out, you find out who is swimming naked.” 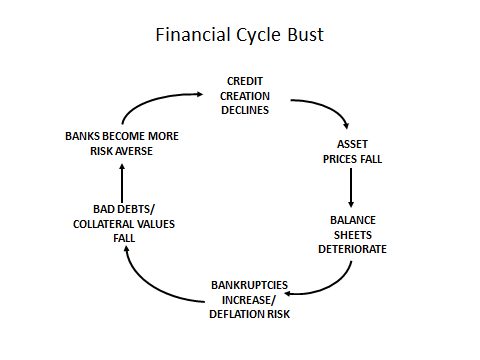 As this process unfolds, credit growth slows and asset prices plummet, highly leveraged households and businesses reduce leverage, financial firms become less willing to roll over or extend credit, all of which can trigger a “balance sheet recession.” This stylized illustration describes events during the Great Depression, Japan in 1990 and the US and elsewhere in 2008. The drivers of both the boom and bust are endogenous to the financial system itself, reflecting its inherent instability.

The key point to keep in mind is the following: The fact that the underlying imbalances build-up over time suggests that these events are not “black swans.” These developments can be monitored in real-time. The link between credit creation, money and asset prices and its consequences for broader macroeconomic stability is where we should focus.

Unfortunately, the traditional view of macroeconomics in the postwar period made a decision to ignore the financial cycle (based on the belief that it does not impact real economic activity). Consequently, macroeconomic models were lulled into a deep sleep in 2006-2007, as there was little reason to worry about excessive inflation (defined as goods and services only — not asset prices) or GDP growth. This was what Ben Bernanke called the “Great Moderation”.

However, the near collapse of the global economic system less than one year later should have triggered a significant rethink — the response has been underwhelming relative to the task-at-hand. For lurking behind the scenes throughout the 2003-2007 period, even as most were applauding, was a build-up in credit and overvalued asset prices that in Fall 2008 nearly brought the global financial (and economic) system to its knees (and the problem was not limited to the bankruptcy of Lehman Brothers).

We remain concerned about a return of financial instability, perhaps not at the same magnitude as 2008 (one can hope, given reduced leverage though household debt levels remain elevated), but sufficient in any case to generate significant losses. So how do we preserve our capital?

We think the crisis in 2007-2009 offers important lessons for investors today. From 2000-2007, mortgage debt accounted for more than 80% of overall household borrowing and was highly correlated (0.69)with rising home prices (see chart below). 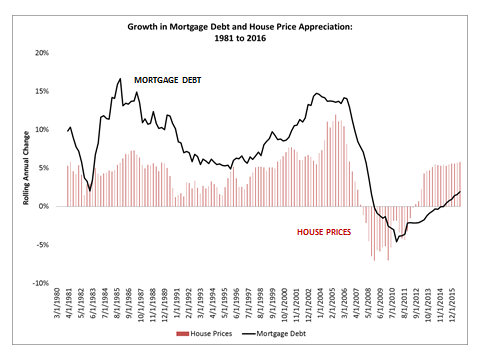 Debt creation during this period (driven to some extent by significant withdrawals of mortgage equity — the ATM machine analogue) added $750 billion per year to aggregate demand, as house prices rose by 66% (generating enormous capital gains to investors). Growth rates in mortgage-related debt and house prices peaked in 2005-2006 and then flattened out before falling sharply in 2007-2008. Debt service peaked in December 2007. In 2008, the S&P 500 declined by 40%%, house prices fell by 20% (much more for leveraged investors) and the financial system nearly collapsed. In all, more than $10 trillion in paper wealth disappeared during the crisis, an amount roughly equivalent to 2/3 of annual GDP. The paradox of financial stability unwound at an enormous cost to investors.

Data about private sector debt levels and household balance sheets are published on a quarterly basis (with a lag) by the Federal Reserve in the Flow of Funds. These provide useful insights into financial stability. Growth in credit/GDP, especially when linked with soaring asset prices, often provides useful early warning information, especially when an asset class is highly leveraged (e.g., real estate in 2006-7).

As for timing of action, it is humbling to realize that it is virtually impossible to take action at precisely the right time – however, an indication of growing vulnerability provides a useful indicator. If investors had been properly informed and positioned ahead of the 2008 crisis, they might well have taken action in late-2007 or early-2008, thus avoiding most of the losses.

In back tests, our regime framework shifted to a “seeking safety” regime in January to March 2008 and again from September 2008 to February 2009. This allowed the portfolio to miss the major decline in Fall 2008, when our portfolio would have been allocated 50% to US Treasuries, 40% to cash and 10% to gold.

Our research strongly indicates that the costs of so-called “false positives” (where action is taken though none may be needed) are dwarfed by the savings obtained by avoiding a major downturn. Once financial stability risks are integrated into a regime-based framework, crises need no longer be viewed as “black swans.”

For more information about regime-based multi-asset class strategies, see here, here, and here. We also have examined the pluses and minuses of adaptive versus passive investing here.

Incorporating financial stability risks into regime-based multi-asset class strategies is essential to pinpointing potential risks to the economy today. When the financial cycle reverses and begins to unwind, it imposes significant costs to investors.

Today, household debts remain elevated, asset prices are over valued, short-term interest rates are rising (for the moment) and the cycle is increasingly long-in-the-tooth. For more discussion about this topics, see the following articles: here and here and here.

Although we are not yet sending up a warning flare, we remain on alert about potential threats to financial stability and given current valuations and other risks, are comfortable holding a 20% cash positions (for strategic purposes).

How Much ‘Lifestyle Creep’ Can I Afford?

Inside story of Tiger Woods’ Car Crash—Text Message to Mistress