Recently, the efficient market valued Tesla (NASDAQ:TSLA) higher than GM (NYSE:GM) and Ford (NYSE:F). I’ll let the experts decide if a niche electric car company is worth more than a giant full-line vehicle company. Time will tell how efficient this valuation is, but I suspect it raised the eyebrows of the fundamental value camp.

Automakers aside, it reminds us valuations in the market are rising and now is the time to ask if the market is overvalued and if it is – so what?

Like most things, there’s more than one way to skin the cat. Most valuation measures are some ratio of stock price, earnings, net worth, bond yields, and the economic growth.

The Value Compared To History

A problem with this ratio is, it can be noisy and gives odd results during market drawdowns, like the spike shown above in 2009. To mitigate this, the P/E ratio is smoothed over the business cycle. There are many ways to do this, but the most popular is the Shiller P/E, which smoothes the data over ten years. The Shiller P/E is slightly higher than the trailing P/E. It is 28.60. The mean is 16.74, and the median is 16.12. The range is narrower – from 4.78 to 44.79.

Value Compared To The Future

All valuation methods have pros and cons. The complaint with this measure is it is backward looking. Maybe earnings will grow faster in the future and the P/E ratio will go down. The ratio doesn’t tell you what will happen in the future.

The P/E ratio compared to forward earnings estimates is at a post-crash high of 17.6 times estimates, and these estimates tend to be overvalued, because Wall Street analysts are optimists that want to keep their jobs.

Fig 3: Forward price earnings are the highest since before the crash 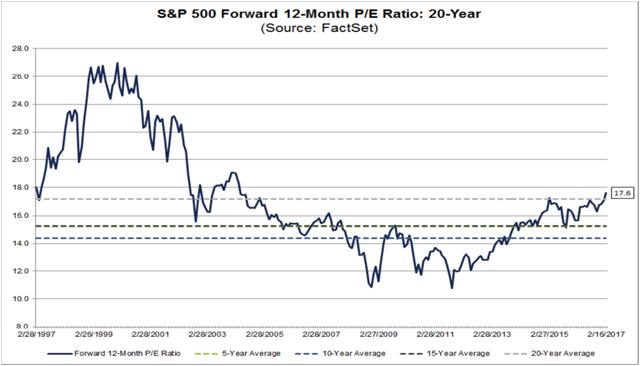 These P/E values are high, but price/earnings ratios over the last 30 years have been above average. Common reasons are low inflation and lower dividend payouts. Whatever the reason, investors have been willing to pay more for earnings in the most recent decades than they have in the earlier ones.

If the reason is inflation, maybe the higher valuations have to do with bond prices, which are strongly correlated with inflation levels.

This method gives the investor a way to compare bonds to stocks as competing investments.

As shown in figure 3, the earnings yield is historically low. An explanation for this is that inflation and bond yields are low.

To remove the effect of bond yields, the bond yield can be removed or subtracted from the earnings yield to give an adjusted earnings yield (figure 5). A common benchmark bond is the 10-year Treasury. 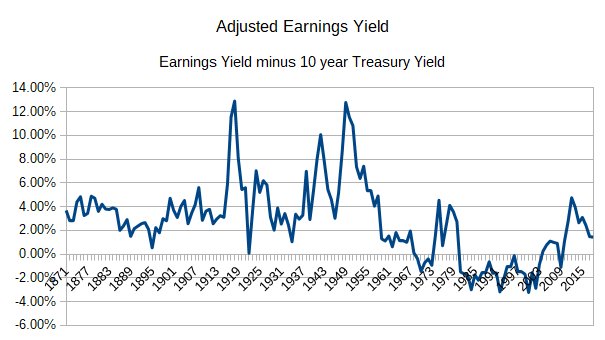 Detractors of this method simply point out that maybe stocks and bonds are overpriced. To get a good value, the stock market has to be valued against something tangible, not another financial instrument.

There are several ways to calculate this valuation. One method is the stock price versus book value, or how many times book value does and investor need to pay. Currently, investors must pay 2.99 for every dollar of book value (figure 6).

Attempting to remedy this distortion, valuation is often stated as a ratio of replacement cost. How much would it cost to replace all of the assets represented in the stock market? This measurement is commonly known as Tobin’s q – named after economist Jeffery Tobin who popularized the method. It is commonly measured as a percentage above either the arithmetic mean or the geometric mean.

Tobin’s q is high, at 64 percent over average.

Fig 7: Tobin’s q is 64 percent over its geometric mean 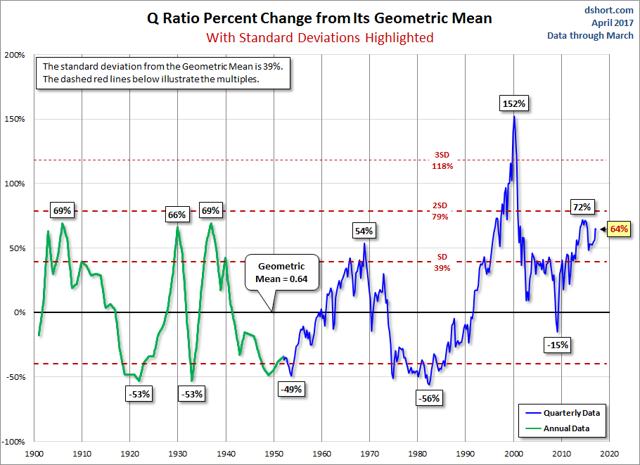 Valuation Compared to the Economy

There is another valuation method that doesn’t use value or earnings. The capitalization of stocks to the country’s GDP, or how much do stocks cost in relation to the overall economy. The economy grows and so do companies, and as the economy grows, the value of companies should also grow. But, if stocks are growing faster than GDP, it could be a warning flag.

As shown in figure 8, stocks as a percent of GDP are at a high level.

Fig 8: Stock market capitalization as a percent of GDP at all-time high

So what if the stock market is highly valued? Why does it matter? After all, the market is still on both a medium and long-term uptrend (figure 9), and the trend is our friend. Or so we are told.

And, the short-term correlation between stock market valuation and stock growth, as shown in figure 10, is weak to non-existent (figure 10). If you had jumped out of the market the last time the Shiller P/E ratio was 28, you would have missed a nice run up to 44. That was a 57 percent increase. Do we need to worry?

Fig 10: Nine percent of one-year market returns can be explained by the forward P/E ratio. 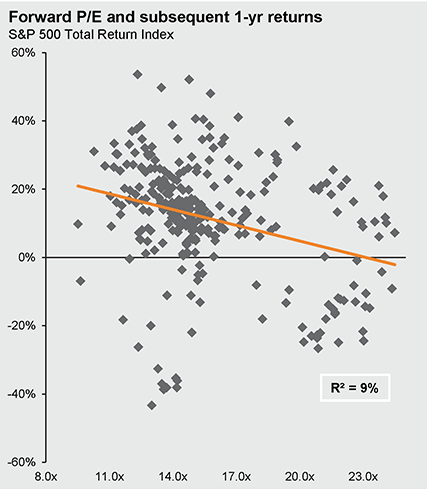 The Risk Is Lower Rewards

The predictive value of the P/E ratio increases over time. Stock market valuation may be of limited value to short-term traders, but valuations matter to long-term buy and hold. Investors buying at high valuations have historically suffered poor future results (figure 11).

Fig 11: Forty-three percent of 5-year returns can be explained by the forward P/E ratios. 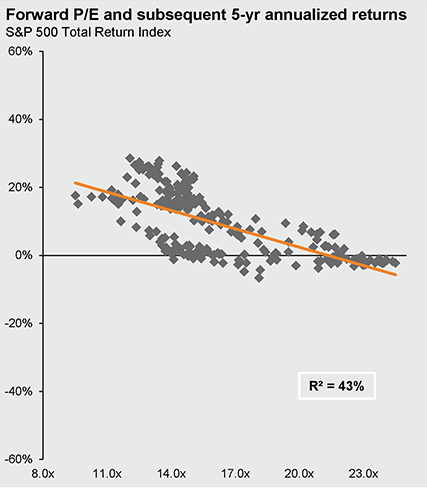 The other problem is the risk of more violent drawdowns. Historically, lower-valued stock markets have smaller losses and higher-priced markets have larger losses (figure 12).

Fig 12: There is a positive correlation between high P/E ratios and higher drawdowns 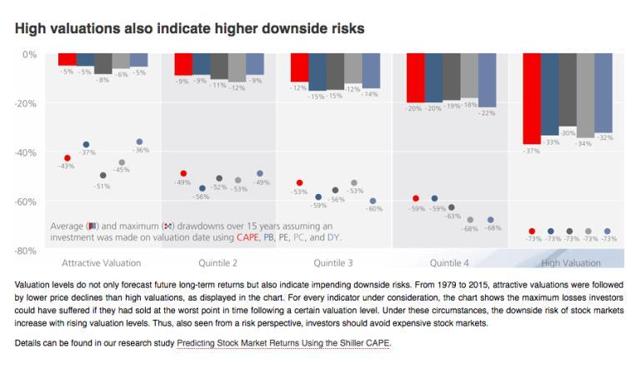 The stock market is highly valued on all measures except adjusted earnings yields. These higher valuations correlate with lower future performance and higher drawdown for long-term buy-and-hold investors.

The market is still in a long-term uptrend. High valuations can always go higher and produce significant gains for short-term traders. With luck, momentum trades can work in the near term. Be selective about sectors, and understand the risks behind high-value markets.

Long-term investors should make sure their portfolio is diversified and risk balanced. Consider reducing exposure to the US stock market and move allocations to lower-valued international markets (NYSEARCA:VEU). They should sell into rallies. Consider implementing stop losses or using structures with some hedging like covered call indexes (NYSEARCA:HSPX) or downside risk mechanisms (NASDAQ:CFO). Avoid shorting (NYSEARCA:HDGE) an upward trending market. And remember, it’s not just the medicine, it’s the dosage.

Consider adding some exposure to investments that are counter to the market like long-term bonds (NYSEARCA:TLT) and zero-coupon treasuries (NYSEARCA:EDV).

These are strategies for consideration, not recommendations. Do your own research or consult an investment advisor.

Additional disclosure: This article is for informational and discussion purposes only. The views expressed in this article are the opinions of the author and should not be interpreted as individualized investment advice. Investment objectives, risk tolerances and the financial situation of individual investors may vary. All investment and speculations have risk. I am not your investment advisor, please consult your financial and tax advisers before investing.

BinaryFest.com - November 12, 2017
0
Bitcoin is a revolutionary kind of currency that was introduced in 2009! It functions by enabling transactions to go through without the need for...