Intro – What Happens If A Recession Hits

Despite being a Tesla (NASDAQ:TSLA) shareholder and long-time Elon Musk fan-boy, it remains critical to analyze Tesla’s fiscal situation with as little bias as possible.

Although I believe the company’s automotive business has enormous disruptive potential to lead the global transition to electric vehicles, Tesla’s fiscal situation is still more or less that of a startup.

It’s by no fault of management, the car business just takes a ridiculous amount of capital and is not easy. It’s no coincidence that all of the major US automakers barely made it out of the 2008 recession unscathed.

Tesla is ramping its production capacity as quickly as possible to meet the overwhelming demand for its upcoming Model 3 and Powerpack. These products will allow Tesla to continue its phenomenal top-line growth, but do require significant investments to get off the ground.

As it currently stands today, Tesla’s business is growing quickly, but remains unprofitable, with operating margins of negative 9.5% in 2016.

If a recession at the level of 2008 were to hit, it would significantly impact luxury vehicle sales around the globe. This would likely drive sales of Tesla’s Model S & X vehicles well below the current 100,000 per year run-rate.

In this scenario Tesla’s core business would likely become even more unprofitable. Combine this with Tesla’s plan to invest between $2-$2.5B to get the Gigafactory ready for Model 3 production and we have a company that will undoubtedly need to raise more capital.

Now the question just becomes how much, and on what terms.

The X Factor, How Quickly Tesla Can Slow Spending

One of the biggest unknowns surrounding Tesla is how much of their spending is being directed towards growth, and how much is simply dedicated to running the core business.

In this recession scenario, Tesla would immediately slow its plans to expand both its retail and supercharger network, in accordance with softening global auto sales. This would dramatically decelerate the growth rate of Tesla’s sales and marketing expenses.

Additionally, Tesla’s Model 3 demand would likely fall off dramatically from my estimated sales of 500,000+ per year. This means Tesla’s need to pour billions of dollars of CAPEX into the project, could be delayed until the economy improved.

If Tesla can put its foot on the brakes in terms on spending as soon as its automotive sales begin declining, it will substantially offset the company’s burn rate. However, even if Tesla takes drastic measures to cut costs, I doubt the company will be able to operate at cash flow breakeven with Model S and X sales below 100,000 per year.

Oh, And We Need To Pay Off Debt

Not only will Tesla require capital to keep itself afloat and fund day-to-day operations, but it will need to pay off debt.

According to the company’s most recently 10K filing, Tesla has approximately $7.5B in long-term debt, with $3.3B of that coming due before the end of 2019. 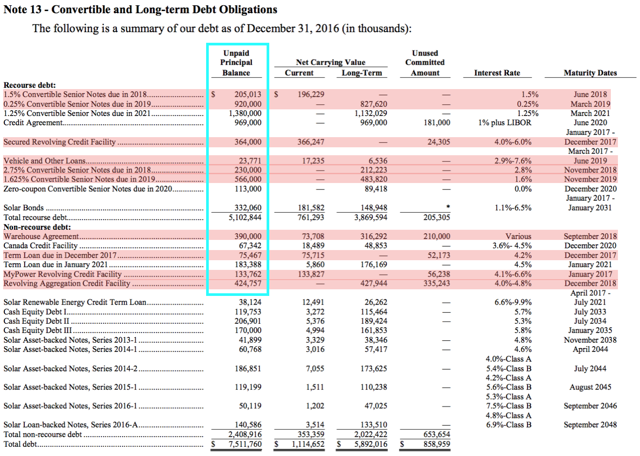 This debt is the real issue. As noted above, Tesla is likely to curb its spending on growth initiatives dramatically if a recession hits. This could shrink the company’s burn rate to under $1B per year, something that seems manageable even if Tesla’s market cap gets cut in half to $25B (would only require 4% dilution per year).

However, unless Tesla can refinance its liabilities amidst a recession, (which seems highly dubious) it will need to muster up $3B+ to pay off these obligations before the end of 2019.

If we assume Tesla will operate at a burn rate of $1B per year for two years (in its core business), and pay off $3.3B in debt, it will need to raise an additional ~$5.3B.

The Worst Case Scenario, A Capital Raise During Economic Collapse

During the next global economic crisis, investor sentiment will sour, and Tesla’s share price is likely to fall significantly.

This means that Tesla will need to raise capital while its share price is depressed, and its fundamentals are deteriorating due to an implosion in new car sales.

This would be a worst case scenario, but is worth playing out. With its current market capitalization of $50B, Tesla would only have to dilute its share count by 10-12% to cover the $5.3B I’ve estimated they would need.

But, if Tesla’s value shrinks in half to $25B, it would need to dilute its outstanding share count by 20-24% to cover this theoretical cash crunch. If the company’s value falls to $10B, then the numbers start to get really ugly.

If Tesla cannot find any investors to help it through a recession and pay off its debt, the company could face bankruptcy.

Investing in Tesla is a risky proposition.

The company has massive potential to electrify the global transportation industry, but is also in a precarious fiscal situation.

If a recession were to hit in the next 12-18 months, or before Model 3 production can get off the ground, Tesla will need to raise more capital.

How much money Tesla needs to raise, and how far its share price has fallen, will determine the amount of dilution shareholders will face. In a worst case scenario where Tesla cannot raise capital on any terms, the company will face bankruptcy.

Even as a Tesla bull and shareholder it is important to acknowledge the risks that come along with buying into Tesla at today’s valuation and this particular period in the macroeconomic cycle.

However, despite the very real risks of Tesla’s profitability and debt-load, I remain optimistic about the company’s potential, and am confident in outsized an risk/reward opportunity even near all-time highs of $308 per share.

Disclosure: I am/we are long TSLA.

BinaryFest.com - May 26, 2018
0
Online roulette is certainly one of the most popular casino games on the Internet. One of the reasons for this is because online...

Investing – Are Securities Protected From Inflation?

The Number One Way to Make Money Online – Review

A Guide to Forex Trading System

The Best Trades for July, After Beating the Market in June