It was about ETFs.

As it turns out, that wasn’t the first time I’ve expressed my reservations about the rampant proliferation of passive, low-cost investment vehicles. In fact, maligning ETFs has become something of an obsession for me of late.

ETFs are a textbook example of “too much of a good thing.” Here’s what I mean by “too much” (I’ve shown these charts before):

Simply put: Beating the broad market is almost impossible over a sufficiently long investment horizon. So why try?

That goes double for periods during which central banks are essentially propping up assets by injecting trillions upon trillions in liquidity.

That said, if you step back and think about ETFs in a kind of common sense way, they actually seem like a really horrible idea. They are, for all intents and purposes, derivatives, which by extension means hordes of retail investors are now derivatives traders. Throw in the rising popularity of ETPs and you’ve also managed to turn retail investors into futures traders (for instance, no VIX ETP actually tracks the VIX, they track VIX futures).

And it gets worse. The creation/destruction mechanism that serves as the scaffolding on which these vehicles are built, is far from the streamlined, miracle of financial engineering that ETF sponsors would have you believe it is.

In fact, for some ETFs (think high-yield funds), it’s a liquidity mismatched nightmare. Investors are given the illusion of liquidity. For instance, you can trade the iShares iBoxx $ High Yield Corporate Bond ETF (NYSEARCA:HYG) all day every day. But that liquidity relies on what Barclays has correctly called “diversifiable flows.”

You’re selling and someone else is buying, eliminating the need for trading in the underlying bonds. But the problem comes in when the flows become unidirectional. If everyone is selling, someone, somewhere is going to have to trade the underlying bonds. Well guess what? The market for those bonds is thin. Which means the potential for a fire sale is high.

Similarly, we learned during the flash-crashing madness that unfolded on the morning of August 24, 2015 that equity ETFs are not immune when it comes to potentially wide NAV bases.

Have a look at the following two charts: 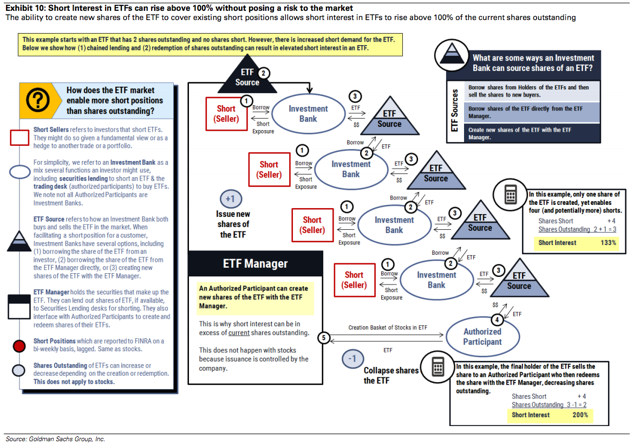 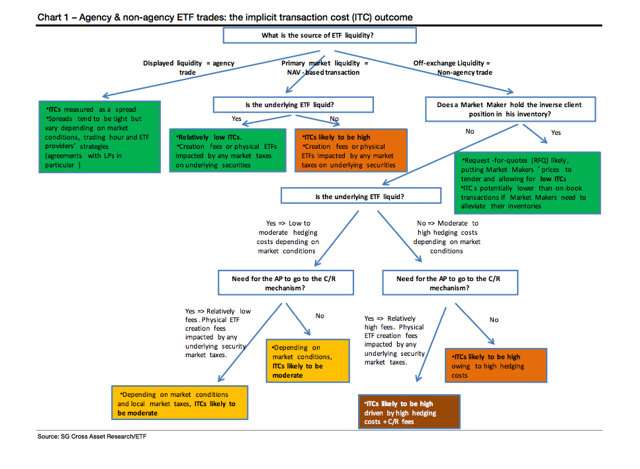 Don’t worry so much about the specifics. The first visual purports to show how ETF short interest can rise above 100% without causing problems and the second seeks to trace the source of implicit transaction costs. There’s a lot to learn from those, but again, just look at them as examples of how the process you’ve been made to believe is streamlined and simple, is anything but.

Up until 2016, a lot of the criticism of ETFs was confined to the conceptual level. Witness Howard Marks’ warning in 2015 that no matter what anyone tells you, “an ETF cannot be more liquid than the underlying assets.”

More recently, however, the criticism of ETFs has become more pointed. I outlined the case for why S&P ETFs (NYSEARCA:SPY) perpetuate a gross misallocation of capital here earlier this month (aside: some people didn’t like that post – at all – but to be honest, it’s another one of those “who you gonna believe, Heisenberg and Goldman or the critics on this platform?” moments).

And then there was the recent study by researchers at Stanford University and Emory University, which showed that ETFs are making it impossible for investors to “seek alpha” (so to speak).

Well, in the most recent and perhaps the most hyperbolic attack on the industry yet, Arik Ahitov and Dennis Bryan, who run the $789 million FPA Capital Fund, are out with a truly stark warning, detailed in a letter to investors dated April 7.

Bloomberg and a few other sites published some excerpts from it on Thursday, but I’ve got the whole letter and I wanted to bring to your attention the excerpts about ETFs. Here are the important bits (I’m going to eschew my usual highlights here because frankly, all of it should be highlighted):

Notwithstanding any of the concerns mentioned above, investors appear excited about the future as they continue to pour money into the stock market. They express this excitement by allocating a tremendous amount of capital into index funds and Exchange-Traded Funds (ETFs). Last year, passive funds had $563 billion of inflows, while active funds experienced $326 billion of outflows, according to Morningstar. Active U.S. equity funds manage $3.6 trillion and passive instruments are about to catch them at $3.1 trillion. When we add the $124 billion poured into ETFs in the first two months of 2017, active and passive investments are almost at parity. This does not even include the so-called active managers that tend to hug an index. The long-term trend is very pronounced. Since 2007, $1.2 trillion dollars disappeared from actively managed U.S. domestic equity funds and $1.4 trillion dollars were added to passive strategies. As the number of corporate listings continues to dwindle, more and more ETFs are brought to the marketplace. This leads to more ETFs (financial vehicles), some of which use leverage, chasing fewer and fewer actual companies. Financial vehicles using leverage to purchase a shrinking pool of real assets-sound familiar?

The consequence of unrelenting inflows into passive funds is that stocks that are included in a major index receive ongoing support by the indiscriminate purchases made by these funds regardless of a company’s fundamentals. The benefits are amplified for companies that are owned by dozens of ETFs and index funds. On the flip side, those unfortunate stocks that are not included in a major index receive the reverse treatment, as active managers that tend to be fully invested are forced to sell shares to meet the onslaught of redemptions they are facing. But the worst fate is saved for those orphan securities that are removed from an index. These stocks face both indiscriminate selling from index funds on their removal date and continued redemption-related selling from actively managed funds. Unfortunately, these buy and sell decisions are entirely disconnected from a company’s fundamentals. This potentially sets the stage, should the tables turn, for an exceptionally compelling investment environment where companies with strong fundamentals are available for purchase at cheap valuations for those searching outside of the indices (as we often are). Moreover, as more investors move from active to passive investments, the market for many individual stocks becomes less liquid. With reduced liquidity, we expect increasing volatility in the marketplace. Last month Kopin Tan wrote in Barron’s, “For weeks, the stretch from 3 p.m. to 4 p.m. became known as the market’s happiest hour, since a surge in late-day buying often nudged indexes from the red into the green. This happened because ETFs and passive index funds, unlike actively managed ones, must rebalance by the end of the day to match the benchmarks they track. According to JP Morgan, a whopping 37% of daily New York Stock Exchange trading recently took place in the last 30 minutes of each session. But when the indexes turn down, will this be the unhappiest hour?”

The weapons of mass destruction during the Great Financial Crisis were three-letter words: CDS (credit default swap), CDO (collateralized debt obligation), etc. The current weapon of mass destruction is also a three-letter word: ETF (exchange-traded fund). When the world decides that there is no need for fundamental research and investors can just blindly purchase index funds and ETFs without any regard to valuation, we say the time to be fearful is now.

Needless to say, that summarizes almost everything I’ve been saying for almost a year both here and elsewhere.

Now as always, I encourage you to draw your own conclusions based on the evidence presented, but I would once again beg you to at least consider that we’re talking about some really – really – smart people here. And they’ve all come to essentially the same conclusion about this industry.

Some of it is probably sour grapes from people who have lost AUM. But a lot of it isn’t. Believe me, Carl Icahn is doing just fine and doesn’t need passive management to die in order to make money and yet he’s saying the very same things.

So that’s something to think really long, and really hard about over the weekend.

Where Will Bitcoin Boom Next?

BinaryFest.com - November 8, 2017
0
Bitcoin is a virtual currency that does not rely on a centralized authority for bookkeeping but instead is completely open-source, peer-to-peer network...

How Halving Affects the Bitcoin

Brainpower Games Anyone Can Play

Q & A from our saveSMART presentation to Canucks’ staff