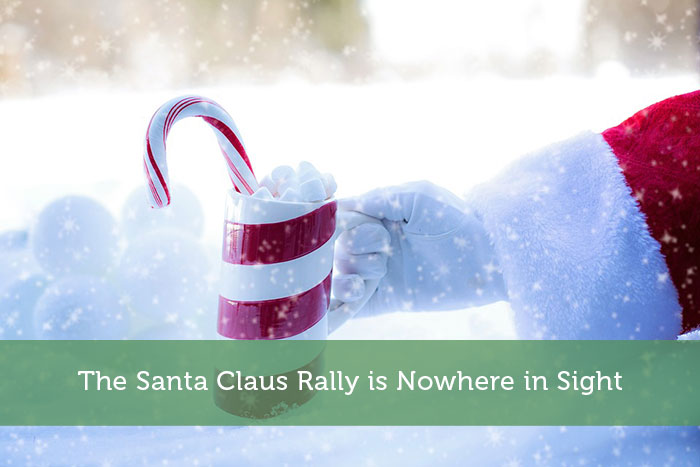 A “Santa Claus Rally” is when the stock market moves upwards during the month of December, usually, in the last week of the year. In the end, financial market rallies are attributable to the collective psychology of the people participating in that market. So during some years, stocks may post strong gains from December into January; other years, not so much. Given how the market has performed so far over the past few months and especially in December so far it is not very likely we’ll see a big upward swing in the S&P500 index by the year’s end.

The world economy is slowing down. Mainstream economists say the odds of a 2019 recession have gone up. Businesses are reluctant to hire because according to CNN, “almost half (48.6%) of US chief financial officers believe the United States will be in recession by the end of next year, according to the Duke University/CFO Global Business Outlook survey released on Wednesday.”

Job growth is also less robust than expected. November only saw 155,000 net new jobs created in the U.S. when most economists were looking for 200,000. Not only did the 155,000 number not meet expectations but it was also much lower compared to the 237,000 jobs created in the prior month of October. And employees are now working less because the average workweek, at 34.4 hours, declined by 0.1 hour over the month of November.

Meanwhile one of the biggest economies in the world, China, is also showing signs of a slow down. Recent statistics show that the overall China growth rate is 4.3%, the lowest for China since May of 2003. At the same time retail sales growth fell to 8.1% from 8.6% from the previous month. Similar trends prevailed across almost all sectors across the Chinese company. In the 3rd quarter Chinese growth was 6.5%. This number would have been a very high standard for just about every developed western nation. However 6.5% actually represents a 10 year low for China. Let’s not also forget about the lingering Chinese-U.S. trade war kerfuffle, which will likely heat up again in the first quarter of 2019. So next year is expected to be a tough year for the globalized economy.

The best thing for investors to do this holiday season is probably to sit on the sidelines and wait for some results early next year. There’s this idea of the January barometer. It basically means that if the Standard & Poor’s 500 market index ends January higher than it started, the rest of the year will likely follow suit. Conversely if the S&P falls in January, then it will fall for the rest of the year. “From 1950 till 1984 both positive and negative prediction had a certainty of about 70% and 90% respectively with 75% in total. After 1985 however, the negative predictive power had been reduced to 50%, or in other words, no predictive power at all.”

Whether or not the January barometer will affect 2019, many analysts will agree that momentum is a key factor in predicting the movement of stocks. It makes sense that a bullish start to a year will put the market in the right direction, making it easier to end the entire year higher. But then again, in January of this year the S&P500 was up 5%, yet it is currently 10% below where it started in the year. And in 2016, the S&P 500 gained 11% for the full year, after losing 4% in January. As long as investors keep a diversified portfolio of stocks, bonds, then a huge movement in one asset class isn’t going to wipe them out.

BinaryFest.com - August 5, 2017
0
When a business deals with several customers, there may be several problems arising, especially in cases when a website is used. When call center...

How To Find And Read Option Price Quotes

Character Counts, But It Can Lead You Astray

What Are The Best On-Line Games?

How To Recognise A Binary Options Scam! YOU NEED TO KNOW!

How was Gold Discovered