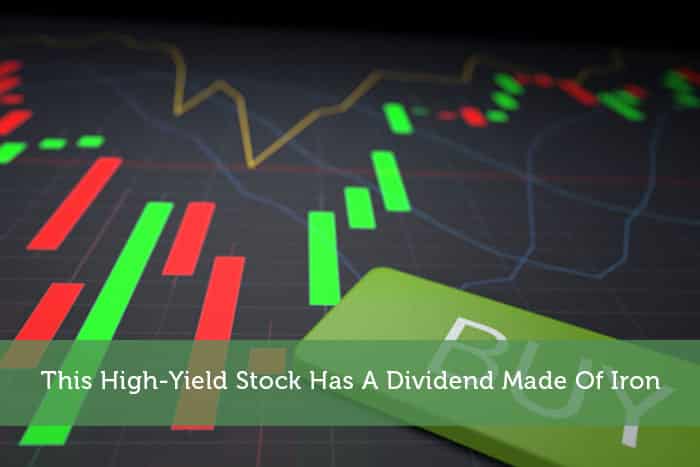 Iron Mountain (IRM) is one of the highest-yielding stocks in the S&P 500 and offers investors compelling total return potential. It is structured as a real estate investment trust (or REIT) and is undergoing a transition from a physical data storage company into a digital data storage company.

Currently, the market is pricing it as a struggling company with a declining core business, but we believe that the market is missing the growth story in its investments in data storage, government contracts, and international expansion. While investors wait for market sentiment to turn, they get paid a fully-covered 7.8% dividend that is expected to grow at an average rate of 4% per year.

In its second quarter, Iron Mountain reported revenue growth of 0.6% despite foreign currency exchange headwinds (underlying organic growth rate was 0.7%). However, expenses outpaced revenue growth by increasing 1.7%, led by cost of sales growth of 3%. Operating income and adjusted earnings per share declined 4.1% and 23.4%, respectively, year over year. On the positive side, EBITDA margins expanded from Q1, improving to 32.9% from 30.8% in Q1 while organic storage rental revenue growth was 2.4% on total storage volume growth (excluding acquisitions) of 2%.

The company needs to continue significantly improving its EBITDA margin in order to meet guidance and get back on track to meet its ambitious growth and deleveraging goals. Something that will likely help them is that a brand-new data center just opened, and several others will be opening in the near future.

IRM’s business has historically seen the vast majority of its revenue and growth come from renting out storage space, a very stable and high-margin business model where customers would often stay put for decades at a time. Today it still views its physical corporate data storage business as its core revenue earner, with its unmatched global infrastructure and a business relationship network encompassing many of the world’s top corporations and even governments giving it a dominant moat in its niche. However, paper needs are shrinking at the enterprise level, causing unit volumes to gradually decline.

As a result, IRM’s future growth prospects depend on its ability to expand its service offerings to coordinating and executing the transition from physical to digital document processing and storage while also expanding into data centers, international developing markets, and government contracts. Management believes that each of these growth avenues is a natural transition for IRM and therefore its growth strategy holds strong potential for success.

Through their multi-decade relationships with existing customers, IRM plans to be their natural and cost-effective partner for digitizing some of their paper documents. In emerging markets, IRM plans to latch onto the higher GDP growth potential and accompany its multinational business partners into their overseas expansions, as evidenced by their recent large acquisitions in China, South Korea, and the Philippines.

Another avenue which management hopes will generate meaningful growth in the years to come is winning new government contracts. In the past year it announced a partnership with a regular DoD vendor for a $30M Army project. While this is a relatively small contract, it shows that management is now successfully executing on its strategy to target government cost-cutting programs such as “Reduce the Footprint.” The growth runway here is promising since government contracts are largely un-vended by the private sector and offer a market size equal to IRM’s entire core North American business, they are typically higher margin due to the barriers to entry in doing business for the government, and they are recession-proof. The third – and perhaps most important – growth avenue for IRM is the data center business. Thanks to its IO, Credit Suisse, and EvoSwitch acquisitions and new growth projects, this business is growing rapidly and enjoys broadly diversified volume across 261 total leases signed during 2018 across several industries.

While the growth runway is vast, the main challenge for the company will be balancing growth investments with sustaining its hefty dividend payout given that their balance sheet is currently fairly heavily leveraged (~5.8x). This is noticeably higher than its nearest peers in the data center and storage sectors (typically between 4x-5x). That being said, 69% of its debt is at fixed interest rates, it has a very reasonable weighted average interest rate of 4.8%, and a weighted average maturity period of 5.6 years. With no significant maturities until 2023, IRM’s balance sheet in no way threatens the liquidity or solvency of the business over the near to medium term.

However, while the business itself is quite safe from bankruptcy and is able to service its debt easily, the high leverage, junk credit rating, and high dividend yield mean that it cannot easily raise additional capital to fund its growth ambitions and reduce dependency on its declining physical storage business. This leaves it with the choice of either issuing additional equity at very unfavorable terms or cutting its dividend in order to retain more cash for growth capital expenditures. Thus far, it has favored additional share issuances at the expense of shareholders. Furthermore, this has placed additional pressure on the dividend as the company now has to pay even more out in dividends as the share count has increased.

Currently, the dividend payout ratio is expected to be 89.6% at the midpoint of 2019 guidance, leaving the company with a massive shortfall of $395 million of incremental capital needed for discretionary investments (primarily data center developments and real estate growth investments and innovation) this year. This will have to be funded with additional share issuances and debt, either further leveraging the balance sheet or further straining the dividend. 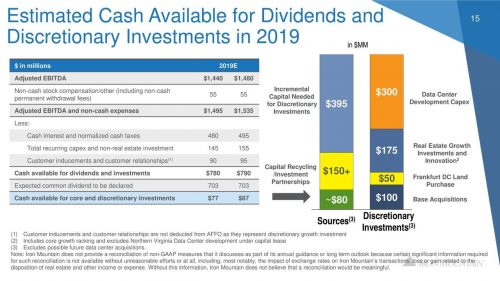 However, with interest rates falling and inflation slightly picking up, IRM should experience some savings and, assuming its businesses can continue to perform well, it should be able to sustain its current dividend as new data center investments come online to offset the dilution from share issuances as well as the additional debt issued.

Furthermore, the fact that IRM’s core physical storage business possesses durable qualities and a defensive nature significantly mitigates the dividend’s risk. In fact, even during market downturns in the past, this business has experienced net volume inflows. We also believe the dividend coverage is enough to enable it to continue its nine year dividend growth streak and join the list of Dividend Achievers. However, its longer-term dividend growth prospects will remain muted until either the company’s share price improves, its capital expenditures decline, or its leverage comes back within the range of 4x-5x.

In conclusion, IRM’s attractive dividend yield of 7.8%, low single-digit expected annual growth in cash flow per share, and defensive business model give the business attractive risk-adjusted returns. While the stock may slow or even eliminate its dividend growth in the near future, its current payout is very attractive and should be quite safe, making this stock an attractive buy for conservative income-oriented investors.

A Parent’s Perspective on Planning for College – Blog

Understanding WineShop At Home: Can You Really Make Money With WineShop...

Top 10 Tips How to Make Money From My Computer