Markets closed Friday little changed. This following both the strong positive earnings after Thursday’s close for AMZN, GOOG, and MSFT, as well as the poor GDP print for Q1. Mr. John M. Mason offers some interesting commentary on breakdown of Q1 GDP that we found interesting. 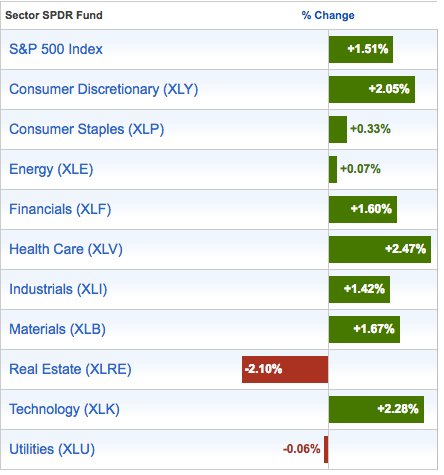 For the week, most all sectors moved higher, Real Estate being the notable exception. Likely readers are aware that almost all the week’s gains (for the S&P at least) occurred at the very beginning of the week on the back of the results from the first round of the French presidential elections.

VIX perked up at the end of the week. Still the story of the week was the early-Monday dive in 30-day-forward implied volatility. What was more interesting to us that the initial drop was how vol continued lower into the week, hitting a low of 10.31 in early trade on Friday.

In fact, the continued vol crush that carried into Tuesday negatively impacted our straddle spread in our Tracking-the-Trade segment.

Below is the economic calendar for the upcoming week, from Bloomberg. 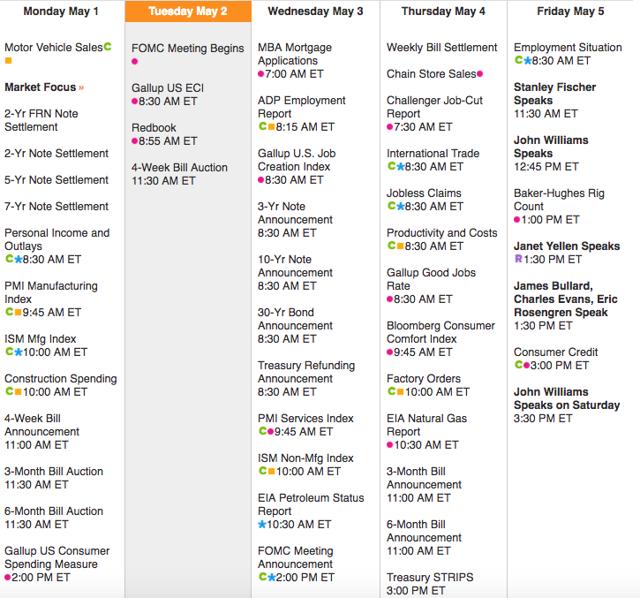 The week contains quite a few items on the economic calendar, most importantly the FOMC Meeting Announcement, the jobs report, and important Fed speakers. That is to say nothing about upcoming earnings

Organic at-the-money S&P vol is down below 7% for next week’s expiration – quite a shift in weekly vol compared to last Friday when it stood above 15!

At-the-money vol for this upcoming Monday expiration was even lower – at a mere 4.4. That will become relevant below during our Tracking-the-Trade segment.

Implied volatility is at least holding up a little better at the monthly and quarterly expirations. Still, these are modest levels by virtually any measure.

If “sell in May and go away” is a trading strategy sympathetic to higher vol levels, ES sure doesn’t know about it!

Looking down the second column above, the ES term structure is once again exhibiting the option version of contango in futures: low at the weekly, and then steadily higher as we move out.

Low vol at the weekly level is not too predictive: the front end can be very whippy. But if the monthly and quarterly vols stay at these low levels much longer, we’d say the stage is being set for the next leg higher in equities. This is not at all to say that equities should go higher, given their nosebleed valuations. But this low-vol environment has been required to get equities to ever-higher valuations, and by extension, prices.

We’d say that if the Jul31 implied vol gets to about 9.3 anytime soon, that’s a strong buy.

On Monday we began a new trade to track. Specifications as follows.

Strategy: Thesis (Set out on Apr 24 at trade initiation – read to see what our thoughts were on entry)

At least for the time being, S&P bulls have broken through the resistance they had been facing for several weeks at ES 2370.

We set out our new strategy just after the first round of the French election.

To test this claim, we will short near-dated vol against longer-dated vol.

Our thesis will prove wrong if realized volatility turns out to be quite high over the next several days.

As we initiate this trade, the ES stands at 2375, after following global risk-on assets smartly higher to begin the final week of April.

To open, we sold one straddle and bought another

Above is the payoff diagram on this spread.

Max gain on one of these is just what you put into the trade (your debit), and even that is only for rather extreme outcomes (large moves up or down before Apr28 expiration). As such, this is not a high-exposure trade.

Note that for most ES levels, the dotted line is above the solid line rather than below it. This means that over the central range, the spread has quite positive theta on it. Essentially, the dotted line pulls the solid line in its direction with the passage of time. The exposures on the spread as of Thursday morning are recorded below (at the time, ES traded at 2386, and so that was the “current” price column).

The options exposures display that this spread is really about gamma, vega, and theta. When we opened the position, the delta was 0, and now it is -20. A move back down to the starting point of 2375 today or tomorrow would be very good news for this baseline trade.

We opened at $20.50; mid is now $25.50, or up $5.00. It is an annoying feature of the Interactive Brokers charts that they show what the payoff diagrams look like as of the close of the day. In this case the Apr28 straddle would have already expired and we’d simply be left with the long May12 straddle.

“Your trade is supposed to last another week. Are you going to do anything to alter your position or just hold the long on the straddle that’s left?”

No, we want to push out the straddle that we’re short from Friday and into early next week.

This, however, proves a bit trickier than one might suspect. For a clue as to why, look at the bid-ask size on the panel above: 4×3! That’s really a thin market. The reason is the Apr28 2375 call we’re short is very illiquid. You don’t want to trade that if you don’t have to. We’ll want to trade the straddle without trading the call – and we can!

Mechanics – rolling out the short straddle

One way to buy (sell) a straddle is to buy (sell) both a call and a put. But there is another way that works better in this case, seeing as we actually just want to roll a straddle we’re already short:

“Why does that work?”

If we buy two Apr28 puts (very liquid and easy to buy because they’re out-of-the-money), then not only does our short-put position go away, but we actually get long a put. If we’re both long the Apr28 2375 puts and short the Apr28 2375 call, then no matter what at expiration we’ll be short an ES futures. That is: either we’ll exercise our put and get short an ES, or the person we wrote the call to will exercise their option and once again we’ll get short an ES.

Buying the two Apr28 puts converts our straddle into a regular short position in ES.

“But I thought you wanted to roll your straddle to Monday.”

Consider that heading into Monday, we’ll be short an ES.

What happens if by end-of-day Monday, ES is above 2375? Nothing: the two options we sold expire worthless.

On the other hand, what happens if by end-of-day Monday ES trades below 2375? Well, we sold two May1 2375 puts. The first put would take us out of our short ES contract. The second put would actually cause us to get long an ES futures. In other words, we’d switch from being short a contract to long a contract!

This is identical to the exposure from being short a May1 2375 straddle.

We’ll wrap up by saying this $4 in added premium brings our basis in the straddle spread from $20.50 down to $16.50. That may sound exciting, and we’re going to keep betting on theta; still, we did not pick up much premium on this trade: as we mentioned earlier, Monday vol’s just so low.

So even though we’re not thrilled about this spread given the low vol, but we’ll keep to it for the time being. In fact, we’ll likely roll from Monday to Wednesday early next week.

We have said in the past that vol at the front end can get very low. Want proof? Look at Friday’s vol on the Apr28 expiry with about half an hour before close:

Thank you for reading Tracking the Trade, and we remind you that these trade ideas are really for educational purposes. They are not so much about making “sim money”; we seek to show you how trades can play out, and offer you the reader a framework for understanding how to work with options Greeks, spreads, and the like.

Just as importantly, Tracking-the-Trade shows you how to divide your ideas into Strategy, Tactics, and Mechanics. Investors spend way too much time in our opinion fixated on strategy, and not nearly enough on tactics or mechanics of how to carry out an idea. That in our mind is a valuable skill set that traders have and investors will need in the years ahead.

Have any questions or suggestions? Let us know! We really enjoy reader comments, and post strong comments from our readers with regularity. We appreciate that.

Disclosure: I am/we are short SPY.

Additional disclosure: We actively trade the futures markets, potentially taking multiple positions on any given day, both long and short. It is our belief that the S&P 500 is meaningfully overvalued. As such, we typically carry a net short position using ES options and futures.

The Power of Money: Important Facts About The Foreign Exchange Market

A Day Of A Plastic Mold Maker's Life