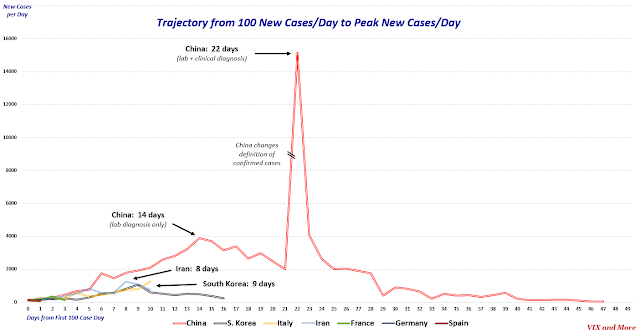 I have seen a
lot written about the Coronavirus,
a.k.a. COVID-19,
but I have yet to see any informed discussion about the trajectory of cases in
various regions, the cycle time to peak new cases or meaningful predictions
about the future course of the spread of the virus.

So here are some thoughts on the subject, using historical data from Wikipedia
that is more standardized in time and collection methodology than any other
data I have been able to find on the Web.
First, I examined the entire history of case data by country and found
inflection points that roughly correspond to 10 new cases and 100 new cases per
day.  As identification of initial cases
is somewhat problematic given the variable protocols for testing, availability
of testing kits, timing of nearby positive cases, etc. I elected to use the 100
new cases per day threshold.

It turns out that
there have been seven countries so far that have logged 100 new COVID-19 cases in
a single day.  In order of reaching that 100
new cases threshold, they are:  China (January 21st),
South Korea
(February 21st), Italy (February 26th),
Iran (February
27th), France
(March 5th), Germany (March 6th)
and Spain
(March 6th).  The U.S. has come
close to the 100 new case threshold and may indeed hit that mark today or
tomorrow.
The graphic
below shows the daily number of new cases in each of the seven 100+ new case
countries.  Note that it is reasonable to
expect some sort of parabolic pattern for new cases with a steep jump in new
cases that eventually flattens out, peaks and declines in a similar
fashion.  This pattern probably would
have been the case in China, except that on February 10th, China changed
the methodology for counting new “confirmed” cases from relying strictly on the
basis of a positive result from a lab testing kit to cases that included patients
where CT scans for pneumonia allowed for a “confirmed” case clinical diagnosis for likely
COVID-19 cases without having to wait for a lab test and results.

[source(s):  Wikipedia, VIX and More]
To summarize the
data in the graph, three of the four countries that are at least ten days from
the initial 100-case day have seen what appears to be a peak in new cases.  In China, it was 22 days from 100 cases to
peak new cases, though it is possible that peak new cases might have been 14
days if China had not expanded the methodology for defining new cases to
include a clinical diagnosis.
In South Korea, a
concerted effort to ramp up testing as quickly as possible is probably
responsible for the fact that South Korea saw a peak in new cases just 9 days
after the first 100-case day.

Italy is the
outlier in that there are no signs of a peak some ten days after the first
100-case day, though it is reasonable to expect that the newly implemented national
lockdown and public gathering measures will help to slow the rate of new cases
going forward.
The remaining
three Western European countries – France, Germany and Spain are only 3-4 days
into their post-100 timeline, so it is too early to talk about a peak.
The first quick
takeaway is that the time from 100 new cases to peak new cases seems to cluster
around 8-14 days or perhaps 8-22 days if you overlook the changes in the
methodology for counting new cases in China.
Second, with the
U.S. new case count hovering just below 100, it is reasonable to expect that
the 8-14 day window for new cases will also apply to the U.S. putting a likely
peak count in the March 17th – March 24th time frame, with an
outside shot of the peak extending out to April 1st.  This assumes, of course, that the U.S.
follows a similar trajectory to the other countries.  Along those lines, it will be interesting to
see if Italy’s new cases peak during the next week.
Obviously, there
are a number of factors that can affect how successful a country can be in
containing the COVID-19 outbreak, conduct an appropriate number of tests and other
factors. Japan, for instance, had its first case almost two months ago and has
yet to approach 100 new cases in a day.
More to come on
the COVID-19 global outbreak, the VIX, volatility and more.
For those who
may be interested, you can always follow me on Twitter at @VIXandMore

How to Beat Slot Machines With Fruit Machine Strategies and Winning...

Currency Technical Analysis Part 1: The Most Important Theory Ever

Is Your FOREX Signal Provider Being Honest About Performance?

Mini Options for Equities and Exchange-Traded Funds: A Failing Product

How to Choose a Cash-Back Credit Card

When Collecting Unemployment Isn’t Enough – What You Can Do!

Clone Firm of Nadex is Targeting Clients on Social Media