A bit over a year ago I looked at cash flows of Net Lease REITs and so thought it might be a good time to see how cash flows have evolved over 2016, which was generally a good year for equity REITs.

As an income investor, I’m concerned with these stocks being able to generate the operational cash flows that will be required to support and grow the dividend. I do not concern myself with the stock’s price (other than to calculate the current yield), as over time, the price will follow the company’s improving or declining cash flows. I also do not follow what management is doing or saying. As an income investor, it is not my job to decide whether purchasing this property or disposing of that property will provide the company’s required internal rate of return. I don’t know enough about running a REIT and I cannot see what the CEO and CFO sees. They are paid to make these decisions. My job is to not to pretend I know enough and am experienced in REIT management enough to judge their decisions. As an income investor, my job is to monitor how well they are doing or not doing their job by using an objective quantitative measure that cannot be manipulated.

Due to space constraints, I am limiting my review to the top 3 net least REITs with at least 10 year dividend histories: Realty Income (NYSE:O), National Retail Properties (NYSE:NNN) and W.P. Carey (NYSE:WPC).

Over the past 10 years, all of these REITs have grown their dividend every year, even during the economic recession of 2008-2010. Clearly, WPC shows the widest variation in annual growth of the dividend while showing a steadily declining dividend growth rate over the past 3 years.

However, WPC is clearly the winner in total dividends paid to common shareholders, including their three special dividends over the past 10 years, in this case beginning with a $20,000 investment on January 3, 2007 through December 31, 2016.

All data are rolling 4 quarters, meaning for a given quarter, the previous 3 quarters of data (Revenue, CFFO, Distributions, # of shares) are added to that given quarter. This serves to smooth out the fluctuations of quarterly cash flows. 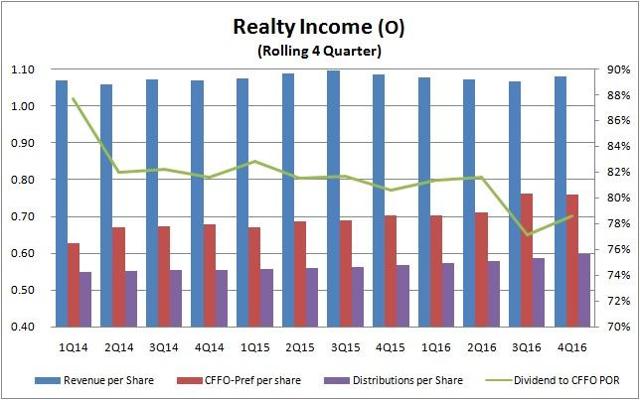 Realty Income’s CFs look fine, except that Revenues per share sagged through the 4 quarters ending 4Q15 through 3Q16 but managed to pick back up in 4Q16. However, CFFO/share has improved each 4Q period as have distributions. The dividend-to-CFFO payout ratio has continually improved over the past 14Q period beginning 2Q13. 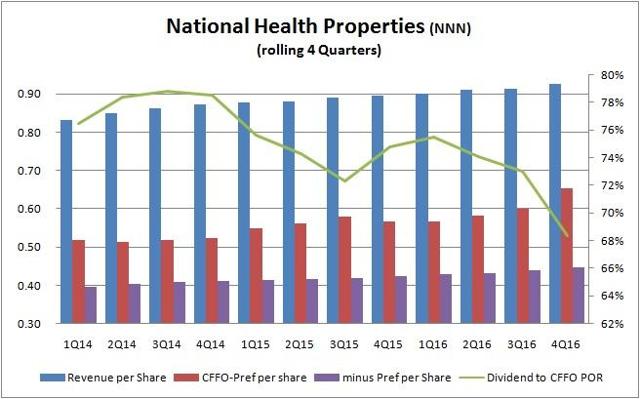 National Retail Properties CFs also look good. Although revenue per share has shown a steady increase for each rolling 4Q period, the CFFO/share did sag from 4Q15 to 1Q16, but then resumed its growth. As a result, the dividend-to-CFFO payout ratio jumped up for that period but then continued its downward trend beginning 1Q16. At 68% of the trailing twelve months (TTM) CFFO, NNN’s payout ratio is 11 percentage points better than O’s 79%. The lower the payout ratio, the more operational dollars are available to be paid toward new investing activities and the fewer the dollars required from new debt or issuance of company stock. 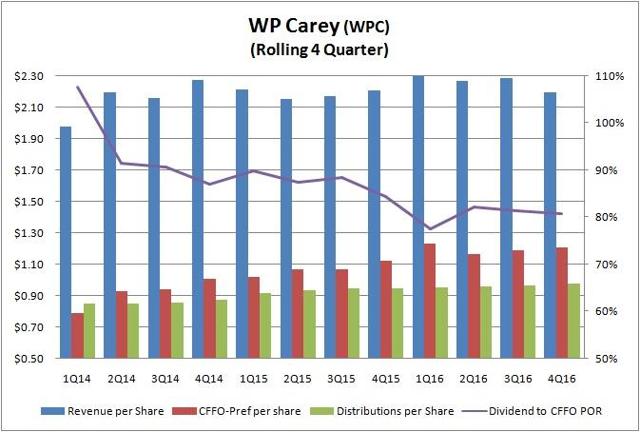 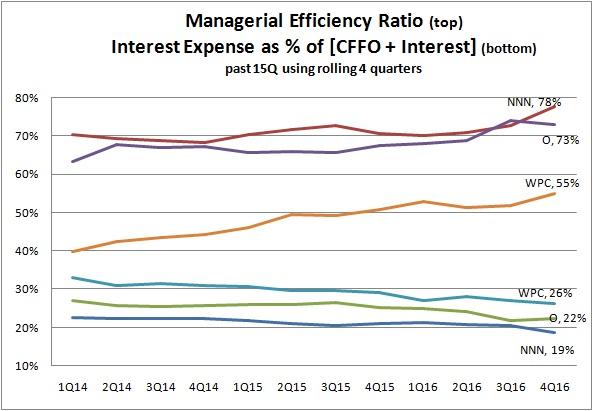 The difference between Revenue and CFFO per share is called the ‘Managerial Efficiency’ ratio. It shows how much CFFO management can create per dollar of revenue. For the TTM, O’s ratio is 73% while NNN’s is 78% while WPC’s is 55%. Reasons for higher operational expenses are often due to higher interest expense, higher labor costs or other expenses management should be managing. Its also noteworthy that this ratio is industry dependent. Triple net lease REITs tend to have much higher managerial efficiency ratios than, say, industrial manufacturing for which the best dividend payers have ratios in the 10% to 15% range.

The bottom part of the above graph shows the % of CFFO (with the interest added back) that is paid towards interest. Through experience, I’ve found an equity REIT with an interest expense exceeding 30% has a much harder time growing their dividend than a REIT paying under 20%. But in WPC’s case, this seems not to have been the case. Despite high interest expense, WPC was able to generate higher operational cash flow than the high cost of interest during the period 2012 through 2014, assuming the cash flow figures provided are correct. However WPC management was able to generate such high levels of operational cash, it appears to have slowed to a rate less than O and NNN over the past 2 years. Can WPC resume past dividend growth?

In doing research on this article, I happened upon a couple of interesting factoids that although not CF in nature, are nevertheless, quite interesting.

1. WPC is a member of NAREIT but does NOT provide NAREIT with their current and past 1099 data. One of the advantages of the NAREIT web site is that it provides current and past 1099 data on publicly traded REITs. However, a call to NAREIT confirmed that WPC has elected not to provide its annual 1099 data for public display. A call to WPC Investor relations referred me to a vice president for whom I’ve left two voice mails but have not received a response. I wonder why.

2. WPC has very large annual asset impairment charges. When a company acquires a capital asset, it places the asset on its balance sheet at their net acquisition cost, and then depreciates it each year. If/when it comes apparent the asset’s value based on discounted future cash flows it is expected to generate is less than book value (acquisition – accumulated depreciation), then the asset may be ‘written down’ by reducing the company’s goodwill (total asset fair value – book value) which will be decreased through this impairment charge. Under GAAP rules, this impairment charge will be taken as a charge to earnings for that year. Now, this is a non-cash event and so is not something I’m normally interested in, as it will only affect the statement of cash flow’s (SCF) cash flow from investing activities (NASDAQ:CFFI) when the asset is actually sold. But the effect of such impairment charge can be significant to the earnings statement. In particular, if assets are entered on the balance sheet at inflated value or the assets clearly are not performing (generating revenue) such that their present value is below book, this will give the appearance of a low debt-to-asset ratio while also artificially increasing the company’s stated shareholder equity and artificially decreases the deferred tax liability. 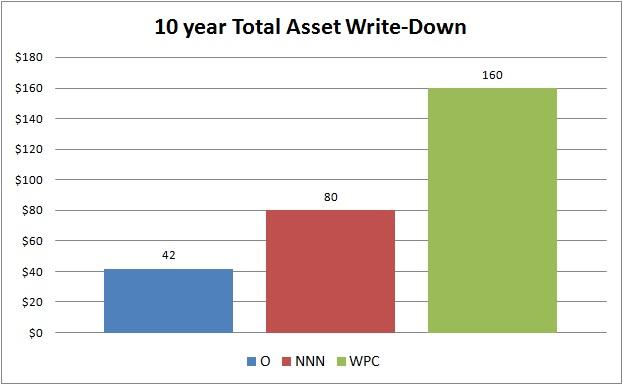 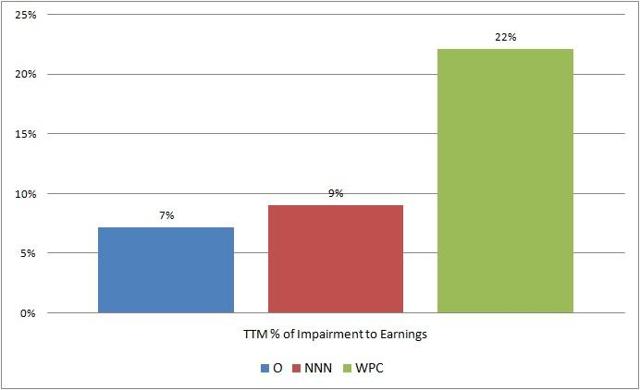 Is there more to be written-down? You bet! Goodwill from the most recent balance sheet for WPC is, and I’m not making this up, in the high $600MM over each of the past 3 years, while O shows about $15MM over the past several years and NNN shows no Goodwill….and O has 17% greater revenue than WPC.

In 2015 when Exxon Mobil’s (NYSE:XOM) CEO, Rex Tillerson, was asked why he did not write down drilling assets on the earnings statement to which Tillerson replied…

“We don’t do write-downs…. We are not going to bail you out by writing it down. That is the message to our organization.”

O and NNN are right where they should be. Cash flows are trending positive, interest expense is declining and they are able to pay a greater % of their investing activities with operational cash remaining after paying a growing dividend. With the continuation of these kinds of cash flows, O and NNN make ideal long term income securities for income investors.

WPC is a mixed picture. Clearly, management was able to generate the needed operational cash to pay rapidly growing dividends for two years, and this is good. Like O and NNN, the trend in CFs is improving, albeit without the consistency of O and NNN. But management is showing itself to operate less efficiently than its competitors, its interest expense is high and dividend growth has slowed over the past two years, dropping well under O and NNN’s dividend growth rate in 2016. The annualized current yields for O, NNN and WPC as of close of market on Wednesday April 26 are O: 4.3%, NNN: 4.2% and WPC: 6.3%. The market is less confident with WPC’s continued performance than it is with O or NNN, and I tend to agree. There is a bit too much that looks like shenanigans with WPC operations. So although I would like to participate in a 6.3% dividend, WPC is going to have to demonstrate a bit more CF consistency and less volatile dividend growth before I would consider adding it to my income portfolio.

BinaryFest.com - June 27, 2017
0
Exhibits are about the seamless information distribution of new products and services. And nothing makes exhibits more successful than attractive displays....

What Is Currency Trading & How Does It Work?

Prostate Milking – The Best Position to Stimulate the Prostate

Forex Price Movement – Factors That Move FX Prices and How...

Spirit Cheer Welcomes Everyone To: All American National Championships