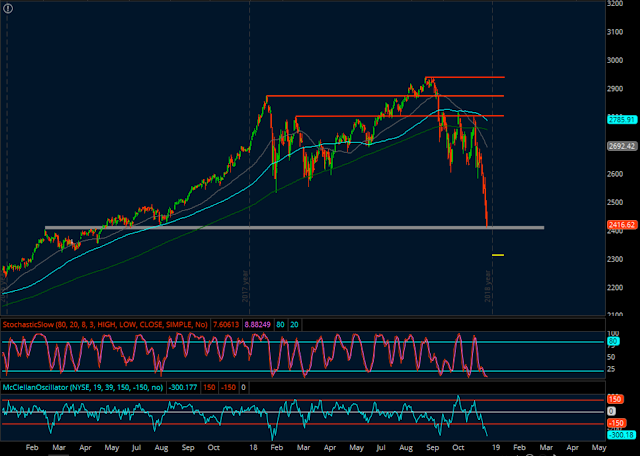 Never in my wildest dreams did I imagine the market would become so vicious so fast. For a while I held a bullish bias into year end, and even when 2600 was broken, I never thought it would go much lower. If you read my article last week, I expected weakness, but never imagined the markets would travel that far down. I mentioned that the last hope for a rally was a Dovish Fed announcement. However, rates were raised, and the intention to keep raising them in the near future remained. Now there are articles out there about rumors of Trump wanting to fire Powell. Well, that would only add to the chaos I believe. If there is one thing Powell has shown is that he has that testicular fortitude to act truly independently as the Fed should supposedly be. And the man seems resolute to removing excesses of the past to avoid similar bubbly catastrophes in the future, even if at the expense of some “minor” pains in the present.

So far, the market is down 12.4% in December alone. Using moneychip’s monthly returns tool and selecting December, this is by far the worst December in history since 1950 (where moneychimp’s stats begin). Previously, the worst had been 2002 at a comparatively minuscule -6.03%. I mean, nobody can play for something like this. Nobody can constantly play a December cycle expecting it to go down 12%. It would be a perennial losing strategy. This is one of those instances where, well, it’s just time to suck it up, and for those who took losses to simply remember that it is part of the game. That nobody perpetually wins in this game.

Using Barchart’s interactive chart of stocks above the 20 day moving average, the current reading of 5.59% is the third lowest reading since the data begins in 2002. The only lower instances are January of 2016 (China’s crisis), August 2011 (Europe’s debt crisis) and October 2008 (Global Financial Crisis).

The number of stocks trading above their 200 day average is at 12%. This is historically an unusually low number. Again, using Barchart’s interactive chart for the 200-day average 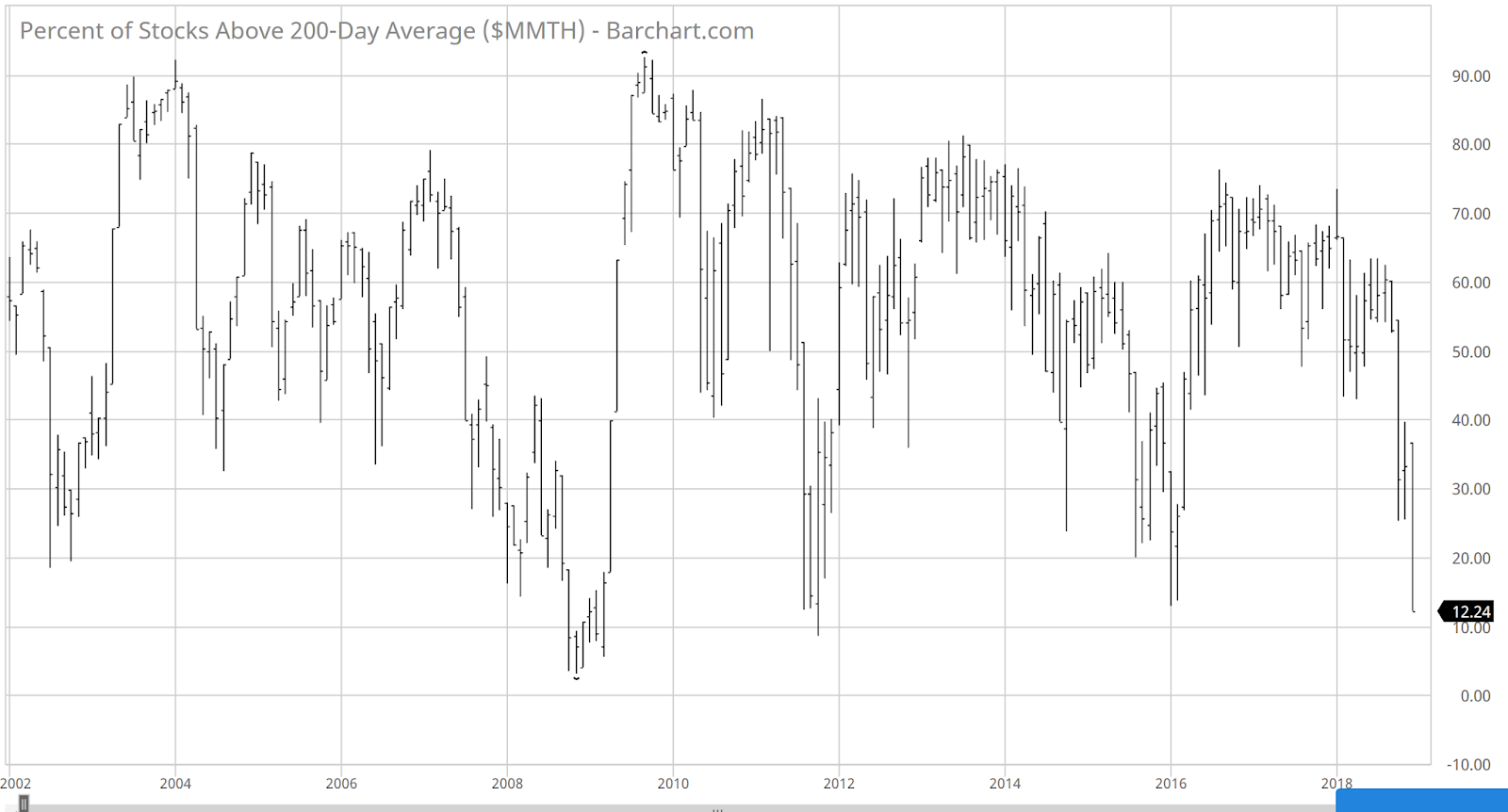 Closely in line with January 2016, summer of 2011 and only lower during the Global Financial Crisis of 2008. So, we are obviously talking about really extreme pessimism at the moment.

If you know me, and I know I do, you correctly assume that I favor upside action at this point. I think the days of V formations, and every little dip being aggressively bought are behind. Some pain inflicted on that ‘Mantra’ will remain in memory for a while, hurting the absolute confidence of bullish market participants for a while. Maybe months, perhaps years. Who knows. So, I am putting a relentless bullish recovery out of the picture. That said, even drastic market sell-offs have small rallies in the process, and I think we are due for one. This last week of the year, with the holidays and markets partially closed on Monday and fully closed on Tuesday can provide some sort of relief to the bleeding. 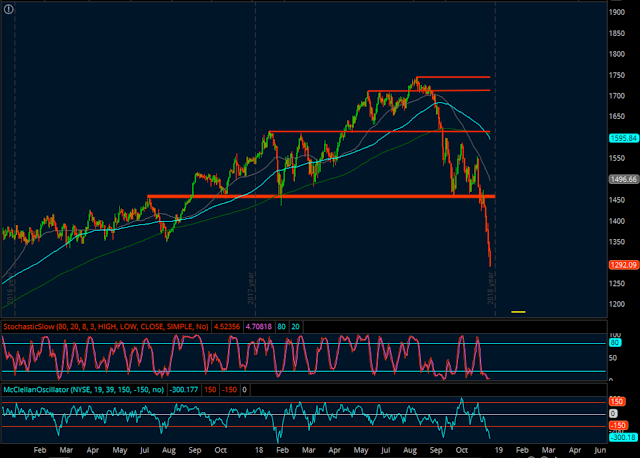 Rather than talking about Russell, I prefer to discuss how to take advantage of the present situation. Options are expensive right now, inflated by historically high volatility. So, a bullish strategy based on simply buying Calls is not idea. A bull risk reversal, where you sell a March SPY 205 Put ($238 credit) and Buy a March 270 Call ($120 debit), gives you a net $118 credit that you get to keep with SPX above 2,050 on March expiration. On the other hand you aggressively bet on a rebound. No need for SPY to reach 270 as per the Call’s strike price. With a simple 2% rebound this position can pay handsomely. You give some more time for markets to find calm (March) and you also take advantage of the high volatility by selling a super inflated Put. The draw-back: you would be willing to get 100 shares of SPY assigned at 205 should the markets break that level (SPX 2050). But even that, would be an attractive position: being long SPY shares at 205 seems to me like an excellent long term play.

The other way to take advantage of this market is to add to long-term equity positions. In my investing portfolio I have added to names such as Visa, Microsoft, Exxon Mobil, Johnson and Johnson. As the markets keep falling, adding to solid businesses at more attractive valuations can be life changing 10 years down the road.

The bullish bets. This is all that is left in the portfolio. Obviously all of them showing losses. Frustratingly, there was almost $10,000 in gains here at some point in the year. Just another one of the countless mistakes, which will be taken into account in an upcoming article about how my approach to Options trading and invested has evolved and how I will proceed moving forward.

– There is nothing left other than just liquidating the bullish positions still open.

Economic Calendar
On a light week,….typically markets are slow……….I’d like to think the same thing this time, but with such a sensitive market, who knows.

Happy Holidays to you all!

BinaryFest.com - April 21, 2017
0
Unless the company you do courier work for operates "self-billing" (ie they produce your invoice for you and send it to you with your...

Can You Profit?  – Binary Options Channel

How to Get into Dropship

The Stochastic – a Momentum Indicator for Bigger Profit Potential

Happiness According to Aristotle and Immanuel Kant

Hydra App is a stupid SCAM!