Only 2.17 SPX points from open to close in the shortened week of trading that just concluded, with the VIX still extremely low. Boring is good for riding out existing positions, but dangerous for the option seller when deploying new positions.
Recent Trading Activity

The positions with expiration in January resulted in a $2,800 gain before commissions ($2,690 after commissions. +2.69% on the overall account). I consider this to be a decent result for any option selling strategy during a period of really low volatility.

In addition, the first March position was initiated on Friday around noon:

– MAR SPX 2090/2100/2360/2370 Unbalanced Iron Condor
for $2,100 credit. I had to be a little more aggressive than usual and
went with 12 deltas and 11 deltas because the credits offered at the ten
delta marks were just too miserable for my liking. This is all due to
the extremely low volatility environment we’ve been dealt, which
inevitably leads to some more risk taking although many traders don’t
realize it, seeing how it all looks calm and well.

Due to
the additional risk taken, I decided to complement the above position
with a long volatility play which is also a partial downside hedge for the
Iron Condor:
BUY 1 March SPY 214 Put @1.26

Finally, a GTC order to close was surprisingly triggered:

– FEB 1200/1210/1470/1480 Unbalanced Iron Condor closed for 0.53 debit. This was a GTC order that has been in place since the beginning of the position, which I’ve been talking about every week. It was triggered on Friday at 3:59 PM. I was out and didn’t even realize it. This resulted in a $1,600 gain (2.13 credit minus 0.53 debit). The IWM 126 Puts that had been purchased as a low volatility hedge are now a useless part of the inventory, losing value to time decay over the weekend. C’est la Vie. Didn’t have time to react. Those IWM 126 Puts will be closed on Monday.

With the three positions that were closed on Friday, the portfolio is up +4.17% for the year, after commissions. Nice, decent start.

No
man’s land and as neutral as it can get.
Plenty of room both ways and now the 50 Day moving average is much closer to current price in what could be considered “normal” distance. The recent exuberance has been absorbed folks, and it was done mostly via time and sideways action. I have a feeling that a good move in one direction is close. Due to the current inventory I am more afraid of a severe decline than a super rally. I’ll explain in a couple of minutes. For now, No man’s land and not interest in adding a new position for now. 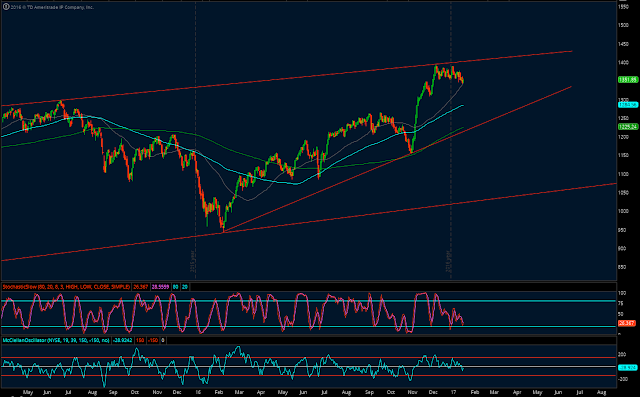 As usual, yellow lines depicting current positions. No position in Russell at the moment. 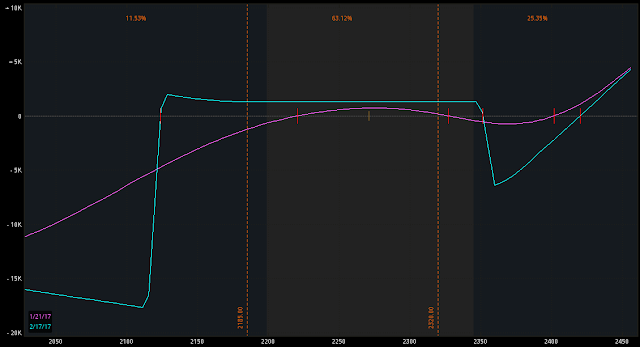 On the way up 2,320 is still the point to take small loss on Call side and forget about it, leaving the Put side open in that case to absorb that loss and bring additional gains. 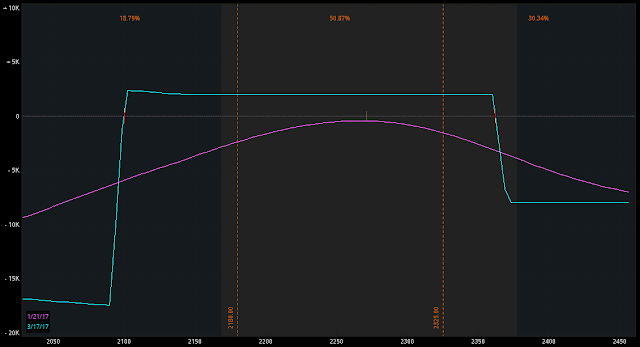 As you can see, upside risk kicks in around SPX 2,325 which happens to be in the same neighborhood of the February SPX Elephant analyzed earlier (SPX 2,320). However, that doesn’t concern me because if it were to happen, the SPX Unbalanced Elephant would simply be a small winner (loss on the Call side taken off for good, more than compensated by gains from Put side).

On the other hand, downside risk and adjustment condition for the March Iron Condor is triggered around the 2,180 area, like that of the February SPX Elephant (2,185), and that is an issue. That’s risk concentration. The false idea that you have several positions independently making you money when in reality they tend to be almost the same thing.

More conservative traders in this case would take one of the positions off. Obviously the Elephant as it is the one with some gains already, (around $700, more than 50% of max profit). Not a bad idea. Personally, I want to be a bit more aggressive this year so I will ride them both for the next few days and re-assess next week. Because the February Elephant is closer to expiration, its downside adjustment point will move lower at a greater speed than that of the young March Iron Condor. This will slightly diversify risk across the price spectrum between these two SPX positions, but it is something that needs the passage of time and obviously the intrinsic risk adopted while you ride them both at the same time. I’ll keep them open as long as the market doesn’t do something crazy and triggers any adjustment condition. More conservative traders will close the Elephant.

– Defend the February SPX Unbalanced Elephant if the index reaches 2,185 (Put side adjustment) or 2,320 (just close Call side for a small loss and ride the Put side)

– Wait for an oversold condition to take place. It could be 2% – 3% lower than current prices and RUT is looking more oversold than SPX. It would be nice to be able to sell a 10-point wide February RUT Credit Put spread in the high 1100’s for 0.60 credit or better.

– If no adjustment condition is materialized and no decline significant enough to take us to an oversold environment, it will be a week of no activity in Lazy Land.

If you are interested in a responsible and sustainable way of trading
options for consistent income with solid risk management, consider acquiring LTOptions, my options trading system to the last detail.

BinaryFest.com - June 2, 2017
0
A needle gun, or as it is also called a pneumatic needle-gun scaler, is a very useful tool to have around the house. More...

How I Ditched Debt: Making Sense of Cents

How to Choose a Winning Forex Exchange Trading Program