Last week I talked about the idea that some sort of break out, or
sell-off should be approaching and we kind of had that: new all-time
highs. Now the situation is a little stretched and different: we’re
close to the upper end of the channel and I think upside is a bit more
limited now.

Unfortunately for options sellers, the VIX is ridiculously low. Now below 11, making the business less attractive. At the same time, for pure long term investors, it is challenging to find companies attractively valued these days. It is time to be more quiet than active in my opinion. Of course, the market will still be the market and do what everyone is least expecting the. But, we need to operate under some basic thesis at least. From a pure technical perspective, price is close to the upper end of the long-term uptrend channel, which points to a 2,313 close by Friday the 3rd. So, I am going to operate under the assumption that it will be challenging for price to close higher than that this upcoming week. SPX 2,313 is my ceiling, we’ll see. And the VIX, lest we forget, is extremely low at 10.58. That number will move up, eventually. In the meantime, one must just be careful fighting low volatility rallies and simply avoiding major harm to the account until the good times come. 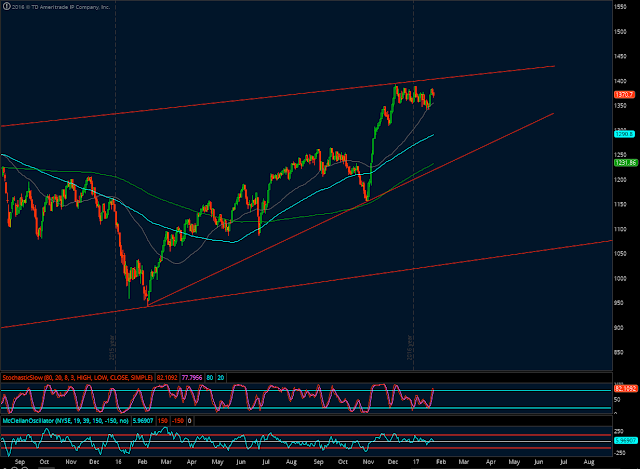 No position in Russell at the moment.

In spite of the new all-time highs reached by SPX this week, this Elephant is not looking bad at all. In fact, the 2,350 short Call is only at the 9-delta mark. Not bad despite the adverse market move. I’ve argued that a rally would not bother me too much simply because this Unbalanced Elephant will make money overall even if the Call side is a loser.

On the way up 2,330 is roughly the point to take small loss on Call side and forget about it, leaving the Put side open in that case to absorb the loss and bring additional gains.

The position is showing roughly $1,000 in open profits. More than 75% of max gain which has been achieved in half the original time to expiration of 6 weeks.

Adjustment point on the way up sits at 2,325. That number is still uncomfortably close to the 2,330 take-loss-and-move-on point of the February Elephant. Even though in my view, SPX 2,313 this week is a high ceiling, the truth is that there is some risk concentration here in similar spots.

Because of this concentration of risk in similar spots I will be taking the February Elephant off the table if I can do so for $1,000 gain or so. In the previous weekend analysis I was willing to ride both positions for one week and then re-asses given how safe they were both looking. The picture has changed a bit and SPX 2,325 – 2,330 is within striking distance (just about 1% higher), so I’m a proponent of taking the Feb Elephant off the table.

– I’ll take the February SPX Unbalanced Elephant off the table if I can do so for a $1,000 gain or better.

– If I’m unable to take the Elephant off the table for the gains I expect, then defend the position in case the index reaches 2,175 (Put side adjustment. This is a 6% market fall in a week. Unlikely) or 2,330 (just close Call side for a small loss and ride the Put side).

– Defend the March SPX Unbalanced Iron Condor if the index reaches
2,170 (Put side adjustment. Unlikely) or 2,325 (Call side adjustment to around SPX 2,400 where it should be safe without hassle).

I honestly haven’t decided between SPX and RUT yet but I’m more inclined towards SPX.
Even though the numbers will change, these are roughly my candidates now:

First week of the month, always interesting given the importance of the data that is reported:

If you are interested in a responsible and sustainable way of trading
options for consistent income with solid risk management, consider acquiring LTOptions, my options trading system to the last detail.

Treat Yourself: The Perks Of Luxury Cruises

Does Your Spending Personality Match Your Credit Cards?

Binary Options Trading In A Nutshell

What is The Forex Bling Grid Trading System?