Investors may be looking at the Fed’s upcoming intended balance sheet reduction as a source of risk moving forward. However, the Fed will not have to reduce the size of its balance sheet too significantly, as I explain below, which will limit its influence in adversely impacting valuations and market volatility.

The Federal Reserve has recently begun publicly communicating its intention of reducing the size of its balance sheet in the near future.

The assets accumulated are largely the product of the Fed’s quantitative easing (QE)) program undertaken in periods from November 2008 to October 2014. In the US, QE came in the form of purchasing Treasuries and mortgage-backed securities. This bid up their prices and decreased their yields such that investors were progressively pushed over into riskier assets to increase wealth in the economy (e.g., US Treasuries à investment-grade corporate bonds à stocks/real estate/high-yield bonds).

The cheapened capital costs effectively lowered interest rates further by allowing corporations to borrow money more inexpensively. Corporate valuations are determined by estimating their future cash flows discounted back to the present. Capital costs are a notable metric into how these cash flows are discounted. As discount rates decrease, valuations increase, other things held equal.

Once interest rates are increased via short-term rates (as the Fed is in the process of doing) and through the reduction of the balance sheet, discount rates will increase. In order for corporate valuations to remain steady or continue to increase, cash flows must increase in conjunction. How would this occur? Through more economic growth and/or inflation.

Government policy also affects the equilibrium rate. The US federal deficit has been tracked statistically since 1929. If we exclude the Great Depression and World War II, a period which predominantly oversaw large and sometime massive deficits (e.g., 26.9% of GDP in 1943), we can see that the budget +/- as a percentage of GDP has decreased. This coincides with a secular downtrend in interest rates. Since 1981, the correlation coefficient is +0.23.

How Will the Fed Decrease Its Balance Sheet? 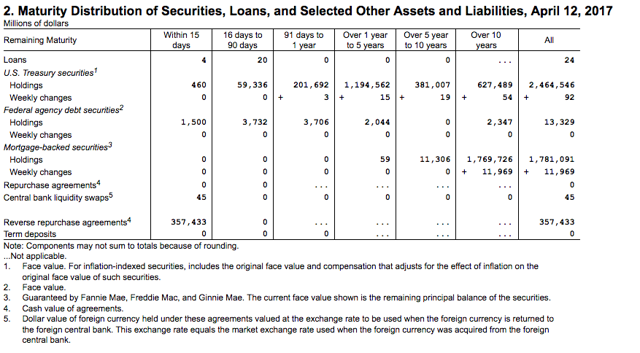 In terms of decreasing the size of it, most likely the Fed will do this in the most conservative fashion possible. The potential for market disruption needs to be minimized such that the balance sheet unwinding process is communicated clearly from the Fed. First, when the policy is set to begin and by how much over what period of time and alongside how this impacts the pace of future increases in the Federal Funds rate.

The effects of this process on broader economic and financial conditions are unknown, due to a lack of precedent. Namely, rather than reinvesting any maturing assets, the Fed will allow these to “run off” and reduce the balance sheet accordingly.

The Fed is currently operating from a lower-bound policy rate of 0.75%. It will most likely try to boost this to 1.25% by the end of 2017. Then, it may begin the balance sheet unwinding by this point given it believes it may have sufficient room to cut rates should any unanticipated effects arise.

To What Extent Does the Balance Sheet Need to Be Reduced?

Before the crisis, the Fed’s balance sheet was mostly comprised of currency on the liability side (Treasuries, MBS, and reverse repo agreements being the primary assets). On September 3, 2008, there was $835 billion of currency in circulation, roughly 92% of the entire balance sheet. Because of the growth in public demand for currency, the extent of the balance sheet’s shrinkage will not be drastic. In the 8-1/2 years since, the amount of currency in circulation has grown at a clip of 7.5% annualized, or 84% overall, to a total of $1.54 trillion.

Accordingly, it’s fairly safe to say that the Fed certainly does not and will not shrink the balance sheet back below the sub-$1 trillion mark ever again.

From the Fed’s own projections, the size of the balance sheet might approximate around $2.5 trillion longer term. 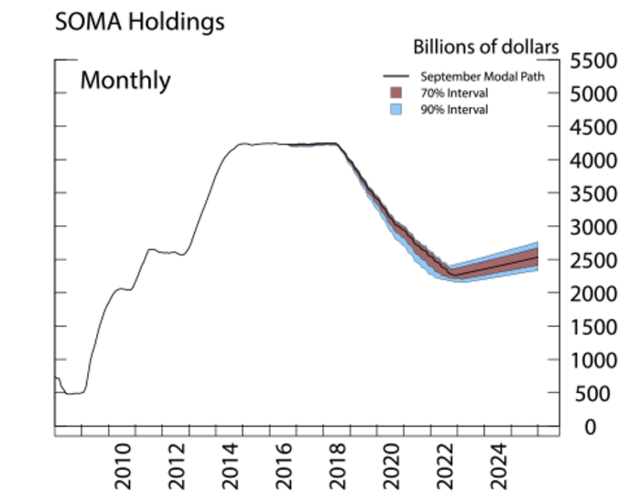 The demand for currency will be a key consideration in how to decrease its size, and will be contingent on interest rates moving forward, domestic growth and inflation, and foreign demand for the dollar. A continuation of the 7.5% annualized increase in currency in circulation would place the Fed’s balance sheet at $2.7 trillion by 2025, assuming the liability side was entirely comprised of currency.

However, there is more than just currency on the liabilities side. The Fed also holds deposits (typically called “reserves”) from commercial banks, money market mutual funds, and other entities. New York Fed President William Dudley has asserted that he would support holding $500 billion to $1 trillion in reserves in the banking system.

Higher quantities of reserves, as a whole, seem to be increasingly favored by FOMC. Prior to September 2008, the Fed set its short-term rates by altering the quantity of reserves in the banking system.

As we can see, prior to the financial crisis, reserve balances within Federal Reserve banks were a small fraction relative to what they are now ($2.36 trillion). On September 10, 2008, they stood at just $9 billion. They would peak at over 300x that level by July 2014 ($2.81 trillion).

Accordingly, it is now wholly infeasible for the Fed to manipulate short-term interest rates through changes to the supply of reserves, given the amount in the system are around 260x higher from the September 2008 level. Now the Federal Funds rate is set by adjusting specific rates it pays on excess and required reserves held within the Fed, as well as the rate applied to reverse repurchase agreements. Most, and maybe all, FOMC members seem content with the current rate-setting system in place, which, in turn, means higher levels of reserves in circulation moving forward and a larger balance sheet.

To continue the current system of effectuating monetary policy, and to ensure that it works, the banking system must have a sufficient level of reserves. The Fed first began adjusting the interest rate on bank reserves back in December 2008. By the end of that month, reserves were at $848 billion. Nominal GDP has increased by 31.2% since, which would put the minimal amount of bank reserves at $1.11 trillion today.

Assuming 4% nominal growth through year-end 2018, this would imply a level of reserves of around $1.2 trillion by that point. To go along with another $1.8 trillion in currency, this would afford a reasonable target of $3.0 trillion.

By 2025, we could see, using a 4% nominal growth annual assumption and 7.5% year-over-year increase in currency, $1.5 trillion in bank reserves and $2.7 trillion in currency on the liabilities side of the balance sheet, for a total size of $4.2 trillion. This isn’t too far off from where we are currently.

This implies that the Fed doesn’t have to be overly concerned with drastically reducing its balance sheet at the moment. The growth of the US economy and public demand for currency could expect to support a $4.5 trillion balance sheet in 9-10 years.

Passively and unvaryingly shedding the excess Treasuries and mortgage-backed securities once the Federal Funds rate gets up to a lower-bound of 1.25% (or higher) is one strategy to allow for an unwinding of the QE-related stimulus while minimizing market volatility.

How Would This Impact the Value of the Market?

Tightening the economy in any form, whether it’s by manipulating the short-term rate or reducing the size of the Fed’s balance sheet, only makes sense in the context of an economy growing at a sufficient pace. From a fundamental perspective, for the equities market to appreciate during a tightening cycle, cash flows must increase beyond the pace at which corporate valuations are impacted by rate hikes.

For example, if the yield curve were to hypothetically undergo a 100-basis point parallel shift increase overnight – without any concomitant increase in corporate earnings expectations – I would expect the S&P 500 (NYSEARCA:SPY) to lose 18.1% of its value (I explain in this article how this might be calculated).

It’s not easy to equate $X balance sheet run-off to Y% effective change in interest rates, but the Fed engineering less demand for US sovereign debt and government-backed MBS would contribute to an increase in their respective yields.

Just for the sake of throwing out an estimate, if we take the average duration of US sovereign debt at 5.73 years, an effective yield of 2.264%, and total public debt outstanding of $19.85 trillion, if the Fed were to run-off $1.5 trillion worth of US Treasuries, this would decrease the price of said debt by 7.56%, assuming linear demand and perfectly elastic supply. This would correlate to an effective tightening in rates of around 148 bps. But again, given the number of moving parts, this is hard to know precisely.

The Federal Reserve is likely to begin to reduce the size of its balance sheet soon, perhaps starting in 2018. It will likely do this once rates are sufficiently above the effective zero lower-bound. The general process will likely be in such a fashion to run off assets in a passive, unvarying manner, with clear public communication about pace and time frame to minimize market volatility and disruption.

Even so, the Fed is not likely to drastically reduce the balance sheet’s size. If the Fed were to reduce its size over the course of two years (i.e., intention of hitting its asset-level target by year-end 2019), it would likely pursue a level of $2.5-3.0 trillion. The slower the run-off, the higher the target asset level. Namely, as nominal growth and increasing public demand for currency increase, this will support a progressively higher balance sheet asset total.

Given balance sheet run-off is effectively unwinding QE stimulus, and there is no precedent by which the Fed can get a general understanding of how it may impact financial markets and the economy more broadly, there is uncertainty with respect to how it will play out. However, so long as the economy is continuing to grow at an adequate pace, the market should be able to tolerate any carefully considered tightening measure without any adverse influence on valuations and volatility.

Gambling And the Art Of Betting Simplified

Groupon ($GRPN) is on the Rise. Is it Worth Buying?

Being Successful in Pick 3 Games – With Much More Confidence

The Obstacles to Wealth Creation

How To Make Money From Web Traffic