Is Trump a crook or an idiot?

If you go by what he promised to do for America, he’s a crook but if you think he’s trying to do what’s best for America, then he’s just an idiot.  The reason Ireland charges only a 15% Corporate Tax rate is because they are an otherwise unattractive place to do business so they compensate for that by offering incredibly low taxes as an incentive to get businesses to move there.

When Ireland dropped their Corporate Tax Rate to 15% in 2015, their economy was $180Bn and they attracted $300Bn worth of corporate assets, which grew their GDP by 26% but it did not grow revenues because it wasn’t enough to cover the overall low rates and employment barely changed because companies simply moved their “official” address to Ireland, and kept their actual offices elsewhere.

Much of that untaxed $300Bn came from the US and it could easily fixed by telling companies they aren’t allowed to do that but, instead, Trump is “fixing” the problem by cutting our own Corporate Tax Rate down to 15%.  The problem with this is – WE ALREADY HAVE MOST OF THE CORPORATIONS – so all this does is give them a MASSIVE tax cut that will cost the US $400Bn a year (see yesterday’s post for math) and, even if the $300Bn comes back from Ireland, 15% of that is just $45Bn a year.   So maybe Trump is an idiot? 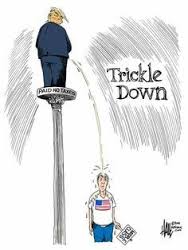 Unfortunately for America, in order for Trump to steal $40M (per year!) from you and your children, he has to enable the entire Top 1% to take $399.96Bn under the same rule.  It would be way better for America if we simply cut Donald a check…
END_OF_DOCUMENT_TOKEN_TO_BE_REPLACED

BinaryFest.com - April 16, 2017
0
You've heard all the stories about the millions of dollars that you can make by day trading the forex markets, how it's easier to...

The Safest Banks to Invest In

How To Invest In Latest BioTech Buzz With A Fund

Internet Marketing For Beginners – Make Huge Money on the Internet!

Making Money Online Can Be a Serious Business