W&T’s growth in the deepwater Gulf of Mexico has been significant in recent years. Between 2009 and 2015, average deepwater production has grown nearly 700% and SEC proved reserves are up over 850%. Gross Acres have increased ~200% from 2009 to 2015. We define a deepwater property as one in over 500 feet of water.

We are as enthusiastic as ever about the opportunities in the Gulf of Mexico and believe we are in a good position to take advantage of this prolific basin. We are entering 2017 with a lower cost structure and a capital program of profitable projects that should allow us to build cash. We expect to benefit from improved seismic technologies, lower operating costs and less competition in the Gulf. Assuming commodity prices continue to remain steady, our 2017 capital plan allocates approximately $125 million to projects that we believe provide a low-risk and high return in producing fields. These projects should yield moderate production growth in 2017 over 2016.

1 – Production decline in the GOM well in the early years is much shallower than the unconventional shale plays. M. Krohn said in the conference call:

This shallow decline curve of many of our projects contributed to our ability to maintain steady production on a small capital program. It’s one of the things we’ve always liked about the Gulf of Mexico and which obviously contributed to our value.

2 – According to SEC rules, the assumed oil price in this year’s reserve report is set at $39.25 per barrel for the life of all reserves.

The company believes that the reserves are significantly under-booked on initial production due to the strict SEC guidelines, and therefore, WTI assumed asset value can be considerably understated and not indicative of our true underlying real asset value.

W&T has improved significantly its balance sheet due to better oil prices. The recent positive momentum of the oil prices should help the stock in 2017 as well, and bring additional revenues that are indispensable for the survival of the business, as it is.

Oil prices are really the name of the game here, and it is still hard to see how they can really trade above $60 per barrel anytime soon with the US Shale booming again? Risk of a downside back to $45 per barrel cannot be brushed away.

Yet, one positive about WTI is that many of the company fields have reservoirs with multiple stacked pays, such as the Mahogany, UM Bank 9-10, Virgo and other stacked pay fields. 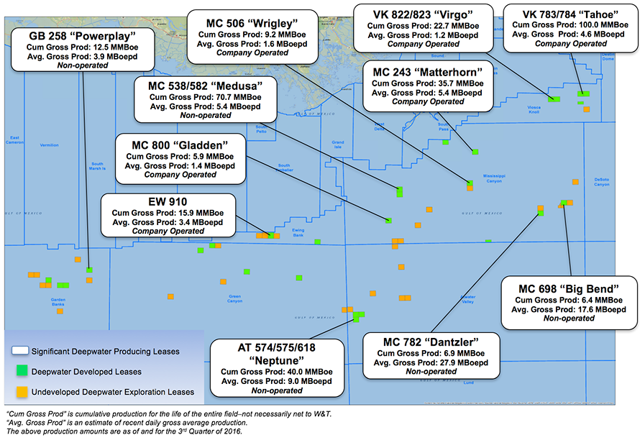 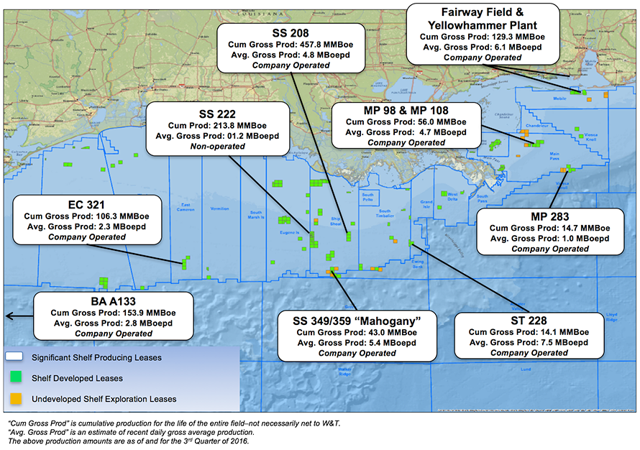 On January 6, 2017, I commented about the Ship Shoal 359 A-18 well has logged 149 feet of net oil pay in five zones and extended the size and depth of the Mahogany field.

I was pleased to learn in the last conference call that the well is still producing over 5,000 barrels of oil equivalent per day.

Technically, WTI is forming a new rising wedge pattern, as indicated above.

The rising wedge is generally a bearish pattern that begins wide at the bottom and contracts as prices move higher and the trading range contracts. This pattern ends often with a negative breakout which happens approximately 65% of the time.

I’m assuming a potential breakout on the downside. Thus, I recommend to take some profit off the table at $3 to $3.25 (resistance), and wait until a more defined rising wedge pattern can be seen again. A potential of a re-test of the $2 support is possible in a short to medium term.

Important note: Do not forget to follow me on W&T Offshore, Inc. and other oil producers. Thank you for your support.

BinaryFest.com - April 20, 2017
0
For several years wine making has been practiced through the process called as vinification, this is a very simple method as compared to the...

Forex Training – Finding The Best Techniques Of The Trade

Do Cell Phones Cause Brain Cancer?

What is MCX Commodity Lot Size?

Forex Autopilot Software – Double Your Investments With This Robot

Why THE FOUNTAIN is an Underrated Science Fiction Film