The first time I heard about Yext (Pending:YEXT) was when the company filed for its IPO on March 13, 2017. After taking first look at what the business model of the company is, I was intrigued and interested in valuing the company ahead of its IPO date to determine how attractive the proposed price range of $8-10 is to an investor. From what will follow, I shall provide my narrative coupled with the valuation analysis to show that an investment into Yext is worthwhile.

Yext is a young technology company in a relatively new and under-developed industry. As any other technology company in its early stages of life, Yext is still unprofitable. Consequently, given lack of historical data and almost no comparables, a substantial part of this section is going to consist of my narrative about the company going forward, based on what I learned from its filings and the information provided on the internet. According to the S-1/A2 filing, “Yext is a knowledge engine.” The way the company lets its customers control their digital knowledge in the cloud and synchronize it to various online venues and platforms (Google Maps, Facebook, Instagram, Siri, etc.) – the so-called PowerListings Network – leads me to think of Yext as an innovator in the online knowledge management industry, which, for the most part, has been manually controlled by companies in-house.

To get a sense of the potential of that industry, we can start by looking at the number of points of interest (POI) in the world and the revenue per each location. To find the former, I looked at the information provided by the Factual – a geo-data provider – to arrive at the figure of roughly 103.6 million locations around the world (in line with what Yext itself provides in its filing). To come up with the latter estimate, we could use the information on the number of covered locations by the company and the revenues generated in each of the three available years supplied in the S-1/A2 filing. The graph below provides an overview of revenue (as well as cost) per location for the last three fiscal years:

Even though there is an obvious downward trend in revenues per location, one should be careful about drawing a quick conclusion that the price the company charges its clients is getting lower. In fact, what causes this reduction has to do with the pace of growth for managed locations, which is much higher than the overall revenue growth. Consequently, we should expect this per-location figure to get even lower with time. Thus, to compute the total addressable market (NYSE:TAM), we could use a conservative rate of $100 of revenues per location and 103.6 million of POIs to arrive at $TAM of $10.36 billion.

According to Yext’s filing, the cost of revenues includes fees paid to PowerListings Network application integrations, which have unpaid, fixed, or variable schemes. Given the graph above, it is noteworthy that the cost per location also is decreasing (and at a greater speed than the revenue per cost), suggesting there is a greater unpaid- or fixed-cost component in the cost structure as well as the fact that we could expect this portion to get even lower, as the company scales up its location coverage. In turn, this diverging pace of growth between the revenue and cost per location would translate into higher gross margins.

At least for now, this $10bln – plus market is largely untapped, with some of the competitors that I managed to find being Localeze, BrightLocal, Whitespark, and Synup. The greatest strengths of Yext is its automated listings management (once the information is entered in the Yext Knowledge Engine, it is automatically synced across the PowerListings Network providers), along with the fact that the company offers this coverage across more than 160 countries – an unmatched advantage. Having a first-mover advantage, Yext has an opportunity not only to obtain a sizable chunk of the market, but also to command premium prices and achieve high operating profit margins in the future. In the meantime, however, to ensure its success, the company will need to invest much not only in R&D to improve its platform and expand the product offering, but also in sales and marketing teams in order to ensure the viability of the third-party digital knowledge management industry and, thus, achieve high level of market penetration.

One other feature I would like to draw attention on is that the company offers its services from the cloud-based platform and on a subscription basis (typically, with one-year duration). As far as I see it, this is a double-edged sword – it allows easy and quick deployment for the customers of Yext at the expense of relatively low switching costs. It is on this occasion that the company has been continuously investing in R&D and, as a result, offering its customers new features every 2-3 years since the creation of Listings feature in 2011 – first, by creating the Pages feature (allowing for local online knowledge management) in 2014 and then by offering Reviews in 2016 (letting customers encourage, facilitate, and respond to reviews of end-clients). On the other hand, there is a “reversion” factor, implying that, should a company opt out of prolonging a subscription, all its listings will be moved back to pre-Yext state – potentially, creating some customer “stickiness.” Nevertheless, only by continuing to invest substantially in R&D and offering new features as well as expanding the PowerListings Network, will Yext be able to differentiate itself from the existing and potential competition and create greater stickiness in its services.

Following my usual valuation approach, I present my assumptions below:

Of course, reinvestments do not end after year 10, and we have to make an assumption for that as well. The terminal period reinvestment rate will be computed following a well-known equation:

Given an assumed sustainable growth rate during the terminal period equal to 2.45% (10-year treasuries) and an ROIC of 12% (which assumes the company will be able to sustain its competitive advantage in the long-term and, thus, achieve an ROIC of 4% in excess of the terminal period WACC of 8% (global medium), will give a reinvestment rate of:

4. Risk – given that Yext is a young growth technology company, for the first five years (transition period) I will use the 90th percentile of the global WACC of 10.68%. For five years afterwards, that rate will decline and move towards the global medium WACC of about 8%.

Apart from these major assumptions, I also have assumed the following:

– 1.575mln shares as an over-allotment option to underwriters, which I believe will be exercised;

The table below presents the model output results: 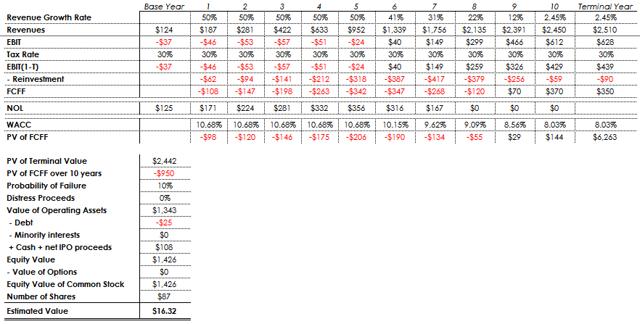 The estimated value that I get is $16.32, which is almost twice as much as the mid-range of the IPO price of $9, or a 45% upside potential. This valuation estimate makes the IPO price quite attractive but, as usual, I have performed the Monte Carlo analysis (with 100,000 iterations) to look at the range of possible values, once my main parameters change, with the following assumptions:

My narrative for Yext is that it is an innovator in the relatively new and highly potential digital knowledge management industry, with first-mover advantage status, which will allow the company to have high revenue growth (by charging premium prices) and high profit margins (for the same reason as well as the fact that it will be able to negotiate better fees for its PowerListings Network and enjoy economies of scale, once it is mature). To support this growth, however, the company will need to carry out signification reinvestments, with 10% chance it will fail by doing so. Having translated this narrative into valuation figures, I have estimated there is only a 28% chance the upper IPO price of $10 is fair, with the medium value being as much as $14.2, making this IPO an attractive one for the long-term investor.

BinaryFest.com - December 31, 2018
0
Because of some recent changes to my premium services, for a limited time Subscribe to SassyPremium and be grandfathered into an AMAZING DEAL. This...

The Keys on How to Make Money Online For Beginners

IBM: The Bar Is Set Too Low – International Business Machines...

Online Streaming Options for the Ill-Informed