I first mentioned Z-scores soon after I started writing about closed-end funds here about three years ago in an analysis of how to look at discounts and premiums in this article: Need 7-8% Yields In Retirement? Build Your Income Portfolio With Closed-End Funds (Part III: Discounts And Premiums) about three years ago It was a fairly new concept to me at the time. At that time I had not seen any other discussion or reference to Z-scores by other authors on Seeking Alpha. Morningstar published a one-year Z-score, but cefconnect had not yet started to do so. This was also about the time I discovered cefanalyzer, which is the best data base for CEFs that I know of, where 3, 6, and 12 month Z-scores are tabulated.

In that article I went into considerable detail on what the Z-score is and how it can be useful. The best way to understand a Z-score is to realize that it represents the distance a fund’s current premium/discount is from its average premium/discount over the time period under consideration. The distance is measured in standard deviations and the sign indicates the direction away from the mean. So a 1-year Z-score of -1.2 means the current premium/discount is 1.2 standard deviations lower (more discounted) than the mean premium/discount for the past year. For normally distributed populations we have a clear understanding of how such distributions will behave and one can estimate probabilities for a given Z-score with the probability decreasing as the absolute (unsigned) value of the Z-score increases. If the assumptions are valid mean reversion of the premium/discount should be highly likely.

In subsequent article I refined my concept of the utility of Z-scores and began to emphasize how any probabilities the standard calculators associate with it are based on the assumption that it is normally distributed for a fund. This turns out to be an invalid assumption for nearly every case, so one must approach such numbers with extreme caution.

Readers who follow CEFs will be aware that valuations (as indicated by premium/discount metrics) are stretched. Cefanalyzer tabulates data on 529 CEFs. The median discount/premium is a -5.46% discount and 80.2% of the funds are discounted.

I’ll be showing an analysis of all CEFs listed on cefanalyzer and three cohorts of those funds: equity, taxable fixed-income and tax-exempt municipal bonds. Let’s start with a look at the top and bottom ten Z-scores for funds in those three cohorts.

Clearly, the shift is strongly away from the expected normal distribution toward higher Z-scores.

Another way to look at these data is to calculate the ratio of the actual and expected distributions. For normally distributed population this value would equal 1 across the distribution. The next chart should the actual/expected normal frequency for Z-scores of all CEFs. 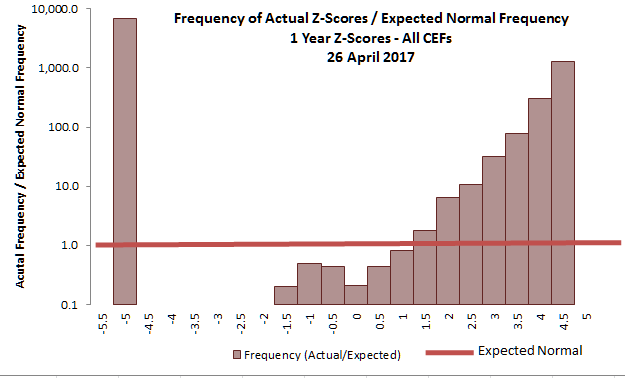 Note that the frequency ratio is plotted on a log axis. The single occurrence of that deeply negative Z-score would be expected 0.000287% of the time, so the ratio to the expected value of is enormous. But let’s ignore that outlier and look at the other 528 Z-scores. The skew to higher than normally expected Z-scores is much more evident in this chart. At the highest bin, the actual distribution is 1000 times the expected normal, and at the negative Z-scores distributions are a fraction of their normally expected values.

To look at this phenomenon in a bit more detail I split the full set of CEFs into three broad categories based on cefanalyzer’s classification scheme: Equity, Taxable Fixed-Income and Tax-Exempt Municipal Bonds.

For equity CEFs (n=201)n the skew to the left is extreme. There are no funds in this category with 1-year Z-scores below -1.5.

Taxable fixed-income funds (n= 113) have similarly skewed Z-scores although the right tail (highest Z-scores) is less extended than it is for the equity cohort.

By comparision, the tax-exempt municipal bond CEFs (n-119) are nearly normally distributed with regard to 1 year Z-scores although even for this category the distribution is shifted to high Z-scores

How Do Z-Scores Correlate with NAV and Market Returns?

One might expect Z-scores to be positively correlated with returns, when funds are showing gains, investors will be inclined to bid them up and discount points will be lost. The next two charts show the relationships between Z-scores and return at NAV and at market price for the entire set of CEFs. 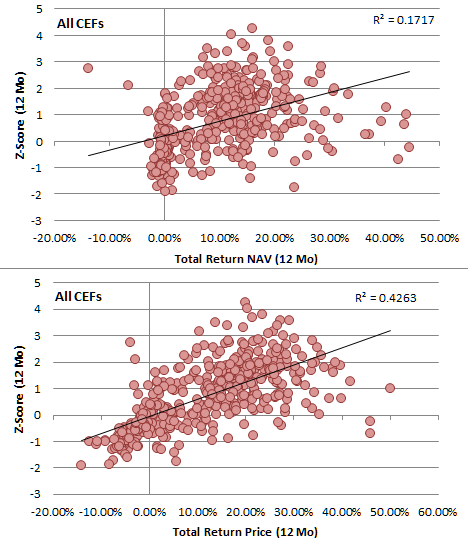 For equity there is no correlation with NAV return. There is a positive correlation to return at market but the correlation coeficient is trivial: r2 is less than 0.1 and the slope of the regression line is nearly half of the full data set. 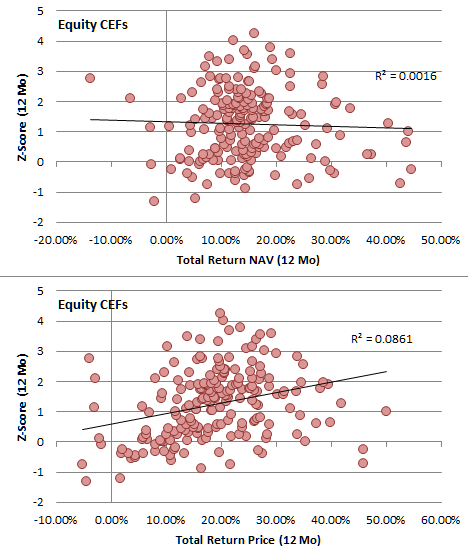 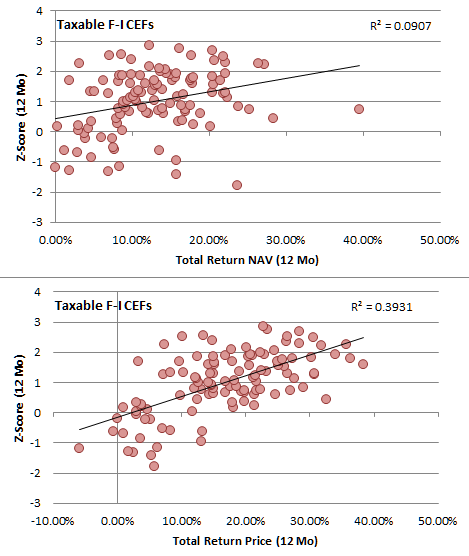 For the year, the tax-exempt muni-bond funds show an interesting pattern. The correlation to NAV return is slightly positive but below 0.05, so essentially meaningless. But the correlation with price return is very strong, r2 = 0.71 and, as shown in the table below, marked by a much steep slope, nearly three times that of the full data set. 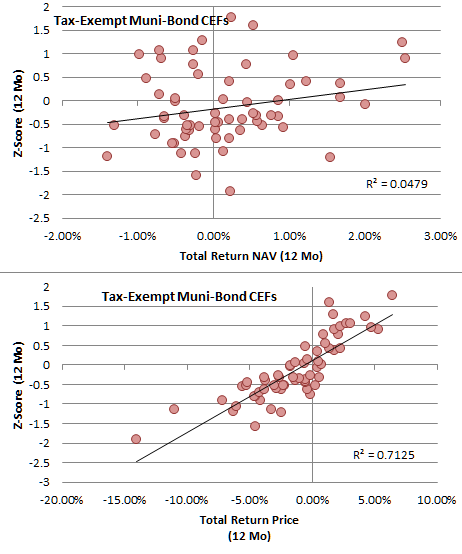 Writers, myself included, sometimes make much of Z-scores when considering valuation of CEFs. But it is important to realize that most statistical assumptions assume normal distributions, and when such an assumptions is at the base of a statistical argument it must be met or the argument is invalid. I have shown here that, at the present time, the distribution of Z-scores among all CEFs and at least two cohorts (Equity and Taxable Fixed-Income) this is clearly not the case.

Furthermore, there is a correlation between Z-scores and market price. In one sense this correlation is trivial. Market price movements affect premiums and discount; this should be obvious. But in another sense it is not. It is also telling us that investors tend to drive discounts and premiums beyond what an efficient market (as seen in NAV returns) would suggest. If this were not the case, the correlation should be flat. The strongly positive slopes on the market price regressions, especially on the muni bonds, tell us that investors are willing to pay handsome premiums for those funds that out-perform the market.

What I’ve done here is look at the distributions of current Z-scores across the range of CEFs. The results provide an informative snapshot of the state of the CEF marketplace at this time. For Z-scores to be useful as a signaling tool it would be more valuable to have an analysis of historical distributions and changes in Z-scores. In addition, we have seen that in today’s market Z-scores for equity and fixed-income CEFs are strongly skewed from a normal distribution toward the higher values. This leads to an intuitive conclusion that mean reversions will lead to a category-wide move toward lower Z-scores. I’ll be following up on this examination of Z-scores in future articles with the intention of examining those two issues: How are Z-scores distributed on an historical basis and what how well is the intuitive conclusion of mean reversion supported by past evidence?

How to Start Trading on a Mini Forex Account

BinaryFest.com - May 2, 2018
0
Mini forex accounts or forex minis are typical accounts which are used by day traders who do not want to trade high volume of...

Work From Home And Make Money With Your Own Online Business

How to Play Mahjong – What the Heck’s a Goulash?

How to be the 2 percent that Succeed at Business on...